In popular belief, Vikings have often been depicted as rough, violent and dirty people, sometimes with beards and long hair. As we have already seen in some of the previous articles, this folkloristic description often did not represent reality. As demonstrated by the many artifacts found, Vikings were also a people of refined tastes, elegant, dedicated to trade with the most powerful nations of the time, the Holy Roman Empire, the Arabian Empire, the Byzantine. A people who, thanks to the Drakkar, the flat-keeled ships, could navigate the open sea as well as along the rivers with shallow draft making explorations in Greenland, Iceland and reaching the coasts of North America a few centuries before Columbus. That of the Vikings is an era known as the Golden Age and unfolds between 750 and 1050 AD. During these three centuries, Scandinavian societies expanded their economy, knowledge and, from the 11th century, absorbed Christian influences. 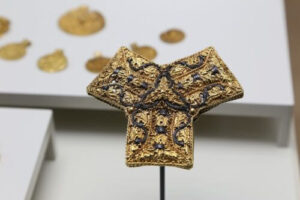 Vikings were skilled craftsmen. The gold and silver they used came from the foreign coins they obtained through trade, which were then melted and shaped, working them with a hammer or melting and pouring them into molds of wax, wood and clay and were used to make various everyday objects and jewelry. Each of their creations was then covered with designs and elaborate carvings, they used more techniques to make a jewel or an object unique and distinguishable, for example, some brooches were made with materials of irrelevant value and they carved them creating designs, then inside them were beaten metal wires and then everything was polished. They were not only skilled with metals, they were also good with other materials such as stone, which was engraved and worked and finally wood, which was very used, they chiseled, engraved and polished creating masterpieces. Some jewelry was created using the “lost wax” method, in which a mold is made of the piece and then the metal is poured in. Once cooled, the wax was broken off and the metal polished. Norse jewelry was of various types and was worn by people of both sexes.

The meaning of Viking jewelry was not only purely aesthetic, but also a matter of social status and spiritual belief. Most people wore bronze and silver pieces, although the wealthiest also wore gold. Among the most popular items were necklaces, bracelets, hand and foot rings, bangles, amulets and pendants, armbands, beads, and brooches.

Necklaces worn by men were made of metal bars twisted together, sometimes adorned with a gemstone, amulet, or pendant; women’s necklaces, as mentioned, were more elaborate. Rings differed between men and women only in size, as did bracelets, although both bracelets and armbands (thicker bracelets) appear to have had ceremonial and social significance.

Among the most popular examples of jewelry, in addition to brooches, were pendants, with very different shapes. Usually, they were in honor of the gods, so they could be in the shape of a throne, a horse in honor of Odin’s steed Sleipnir, weapons associated with various deities, among which, of course, the most popular was Thor’s hammer, Mjölnir: this was not only considered an amulet of protection against threats, but a source of strength to which a person could draw during the vicissitudes of life.

Among the most common jewelry worn by the Vikings were pendants of religious symbols that had meaning to the wearer.

Mjolnir was a symbol of protection, as Thor was the designated protector of Midgard and Asgard against the chaotic forces of the giants. It was also a symbol of a warrior’s strength, as Thor was considered the strongest and best of all warriors. 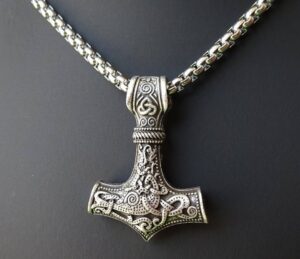 Aside from these pendants, the most common piece of jewelry among Viking men were arm rings which were basically bracelets made of gold or silver or leather. Arm rings made from precious materials were also used as currency. Vikings often cut pieces of precious metal from their ring and used them as a form of payment.

These arm rings were important symbols of social status. They were exchanged between allies, and wealthy lords often gave these rings to their warriors to ensure their loyalty.

The Norse bracelet was essentially a coin purse. It was designed to be easily folded, and to be able to offer a piece in exchange for goods or services. The bracelet also symbolized the transition from boy to man, or could be given as a gift from someone of a higher social class toward one of his subordinates. An example is the figure of King Hrothgar in Beowulf, known as the “ring giver” – a generous gentleman who dispensed gifts to those in his good graces.

Probably the most common piece of Viking Jewelry worn by women were brooches, which were used to hold the straps of their dresses in place. Men also often used brooches to secure their cloaks on their shoulders.

They were usually made of bronze, and while they tended to be oval-shaped in the ninth and early tenth centuries, disk-shaped brooches were more popular in the second half of the tenth century. Wolf in his book “Everyday Life During the Extraordinary Era of the Norsemen” comments about the popularity, and necessity, of brooches:

“Brooches were what we might call a must-have piece of jewelry, as they had the function of securing clothing. Many have been found, from unique pieces made of precious metals to mass-produced pieces made of low-cost materials. The latter were often covered on the surface to give them the appearance of gold or silver. The oval brooches, dome-shaped, used by women to stop the clothes are the most common. Worn in pairs, they usually measure 10-12 cm, with conspicuous decorations in relief and sometimes adorned with filigree. They are generally decorated with motifs of intertwined animals. ” 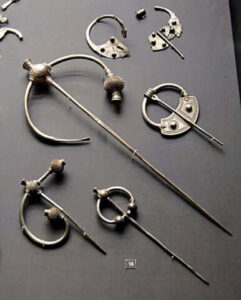 Vikings used a wide range of jewelry, just as we do today. Jewelry was designed both for aesthetics and as an exchange for money, finally, it was common for Vikings to wear symbols that also had personal or religious significance such as the Mjolnir hammer.

Surflegacy is the final destination for the modern Viking fan looking for something different from the usual overpriced dropshipping Chinese stuff. Every single item is hand-assembled in our Workshop in Italy. For more Viking Jewelry visit our store clicking in the link image below

Viking symbols and their meaning

The culture of the Nordic or Viking population has always been considered one of the most fascinating. Merit surely of the valiant deed...

END_OF_DOCUMENT_TOKEN_TO_BE_REPLACED

In Norse mythology, Sleipnir is Odin's horse. Grey in color, with eight legs, he is the best and fastest. He is able to ride the sky an...