Fenrir, also known as Vanargand, Fenrisúlfr or Vánagandr, is a giant legendary wolf from Norse Mythology.

Fenrir’s name, which means wolflike monster, is also used metaphorically to refer to giants, compared to wolves in several texts.

Fenrir was generated by the union of the god Loki with the giantess Angrboða: born with him the serpent Jormungand and his sister Hel. Later, a witch raised him in the iron forest of Jarnvior

Fenrir is a very special wolf

Just like his father, he has an uncommon intelligence and he can even speak, making him a strong opponent both physically and mentally.

When the gods knew that Fenrir was raised together with Hel and Miðgarðsormr in Jötunheimr, the land of giants, they decided to show them to Odin so that he could decide what to do with them: the prophecies said that from such creatures nothing but misfortunes would come

While Hel was sent to reign in the underworld, and Jormungand sank to the bottom of the ocean, not knowing what to do with Fenrir, the gods kept him with them.

By order of Odin he lived in Ásgard. He grew in size and ferocity, so that only one god, Týr, had the courage to bring him regular food.

Despite the alarming prophecies that from this terrible creature would come only misfortune, the gods decided to chain him, but the task did not seem easy.

The gods prepared a chain and proposed to the wolf to be tied to measure his strength in an attempt to break it. But Fenrir broke it with ease, and the same happened with a second, stronger chain.

The gods, seeing that Fenrir continued to grow disproportionately, decided to send a servant of Freyr to the kingdom of the elves to make a magical chain. Gleipnir (“that devours”, or “that mocks”) was then built by certain dwarves with the sound of a cat’s step, rock roots, a woman’s beard, bear sinews, bird or milk saliva, and fish breath

It is from that day, it is said, that women no longer have beards, cats pounce no sound, and no roots grow under rocks. The rope was very thin and looked like a strip of silk, but it was impossible to break it.

The gods then went to an island named Lyngvi, on Lake Ámsvartnir, and there summoned Fenrir.

But the wolf, upon seeing that chain looking so fragile, became suspicious, because he feared some spell or deception. After a brief discussion, he agreed to be bound, but on one condition: no one would use Gleipnir until someone would put his hand over his mouth, as a sign of fidelity to the pact.

Týr accepts, and although he knows that in this way his hand would almost certainly be sacrificed, As soon as the wolf tried to free himself from Gleipnir, he was unable to do so, even though he used all his terrible strength. The gods burst out laughing at the spectacle, all except Týr. Týr, predictably, had his hand cut off. Image Dorothy Hardy/Myths of the Norsemen by H. A. Guerber

During the action, Fenrir tried several times to bite his captors, so they put a sword between the two jaws, this way he could not bite anymore.

Since then Fenrir remains chained on the island, and so will remain until the end of the world. Mad with rage, the great wolf howls, and drools, so that from his saliva was formed a river, named Ván (literally “waiting”).

When the end of the world, the Ragnarök will come, all ties are broken, and even the magical chain that binds Fenrir will melt. The wolf, free again, will attack the Gods, along with the other forces of disorder and darkness.

He will be so big and will open his mouth with such ferocity, that the lower jaw will touch the ground and the upper one the sky: but if there was more space, he will open it even wider. 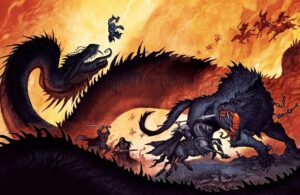 A scene from Ragnarok with Frenir

Fenrir will be so big and strong that he will devour the very Father of All, Odin. Then he will engage in a mortal fight with Víðarr, Odin’s son, destined to avenge his father.

Víðarr will stop the lower jaw of Fenrir with a foot, and the upper one with a hand, breaking them. He will then kill him with a sword strike to the heart.

Are passionate about Vikings or Norse mythology?

The Norns: Guardians of Fate in Norse Mythology

The Norns, or the Fates, are a trio of goddesses from Norse mythology. They are often depicted as three powerful female figures that pr...

END_OF_DOCUMENT_TOKEN_TO_BE_REPLACED

Odin is the All-Father of the Norse Pantheon and Asgard, we can consider him one of the most complex and enigmatic figures in Norse Myt...

END_OF_DOCUMENT_TOKEN_TO_BE_REPLACED

Vikings fans are finally happy to see that the latest version of the video game Assassin's Creed Valhalla is set in a world filled with...

END_OF_DOCUMENT_TOKEN_TO_BE_REPLACED

In Norse mythology, Sleipnir is Odin’s horse. Grey in color, with eight legged horse, he is the best and fastest. He can ride the sky, ...