Odin is the All-Father of the Norse Pantheon and Asgard, we can consider him one of the most complex and enigmatic figures in Norse Mythology.

His name is cognate with the first element of his Norse name, Óðr, which means “fury, excitation”.

He is also the father of the gods’ Thor and Baldur and the husband of the Goddess Frigg.

In the Viking age and paganism, the god was known in Old English as Wōden, in Old Saxon as Wodan, and in Old High German as Wuotan or Wutan, all stemming from the reconstructed Proto-Germanic theonym Wōđanaz.

Odin, is the most popular deity in the Norse Pantheon, and a lot has been written about him.

The great all father is not only known by various names and is shown in a variety of ways, but is also represented by different symbols.

There is his mighty spear, Gungnir, the two ravens Huginn and Muninn (who represent thought and memory) and the 2 wolves Geri and Freki, as well as his notorious missing eye.

How does Odin lose his eye?

Odin is often depicted as a one-eyed old man with a long white beard, wearing a cloak and a wide-brimmed hat. 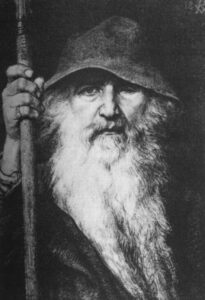 Odin was not always an omniscient deity, despite being the omnipotent All-Father. That is what drove his quest for knowledge and wisdom.

He ventured far and wide in order to obtain this information, sacrificing everything in the process. Odin eventually became one of the wisest gods in Norse mythology, since there was still one Norse deity who was somewhat wiser than him.

This deity’s name was Mimir he was thought to have divine knowledge of the entire cosmos. He attained this position by drinking from the Well of Mmisbrunnr, also known as the Well of Wisdom, on a regular basis.

When Odin discovered the source of Mimir’s knowledge, he went to the Well of Urd and met Mimir, the well’s guardian and asked permission to drink the water from the well.

Mimir agreed to give Odin a drink from the well, but he had to pay a steep price for it, in exchange, he had to sacrifice one eye. 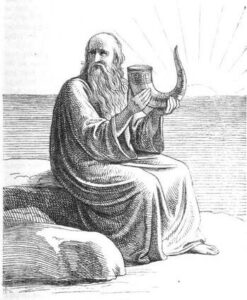 Odin agreed and after plucking one eye he was able to drink from the well. The water in the well is said to be sacred and to have the power to heal and grant unlimited true knowledge and wisdom, but not in an academic way, what he obtained was spiritual and ethereal knowledge.

Why did Odin sacrifice his eye?

While there are many theories as to why Odin sacrificed his eye, the most popular one is that he did so in order to gain unlimited ethereal knowledge and unmatched wisdom.

With this sacrifice he let go of the profane way of seeing, clouded by numerous imperfections, in order to acquire a more divine and holy one.

Already in the past, his everlasting quest for wisdom had led him to do something similar, he hung himself for nine days and nine nights, on a branch of the world tree Yggdrasil, in order to obtain knowledge and decipher the runes. 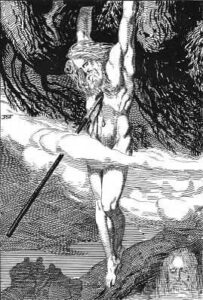 The runes were the ancient Norse alphabet, and they were thought to be very powerful and magic.

The poetic edda contains Odin’s story of his self-sacrifice

I trow I hung on that windy Tree

stabbed with a spear, offered to Odin,

myself to mine own self given,

high on that Tree of which none hath heard

from what roots it rises to heaven.

I didn’t find a place
in the corner,
I crawled down,
I picked up runes, I
screamed , I
fell back from there.

All of his self-sacrifices, however, were not in vain. Each time, he obtained secret wisdom and mystical wisdom that strengthened his ability.

Which eye did Odin sacrifice?

This question has been debated many times, and there is no reliable source that states which eye was. Most of the depictions show him missing the left eye, and in a few, is the right one. 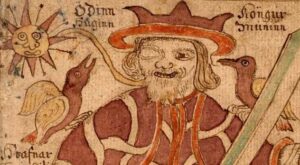 Odin with Huginn and Muninn

To be fair, It makes no difference which eye he sacrificed. What matters is that Odin actually sacrificed an eye. The true meaning of the act, was to renounce the mundane in order to obtain a higher and divine knowledge

What is Odin’s rune?

The runes are a form of writing used by the Norse people. They were used for a variety of purposes, including magic, divination, and writing.

In Norse Mythology, the blank rune is known as Odin’s rune. This powerful symbol is said to represent the God Odin himself.

The blank rune is a versatile tool that can be used for many different purposes. It can be used to cleanse an area of negative energy, banish evil spirits, or protect against harmful magic. It is also believed to promote healing and bring good luck. 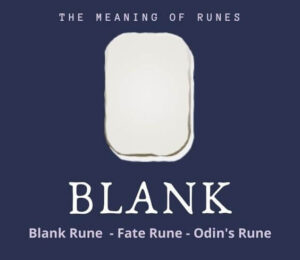 Despite its dangers, the blank rune is still a popular symbol among those who practice Norse magic.

It also represents the unknown and the unknowable and is a reminder that there are some things in this world that we will never understand. It’s a reminder to keep our minds open and to never stop learning.

What is Odin’s Triangle?

In Norse mythology, Odin’s Triangle is a symbol representing the three interlocking triangles of the Valknut. The Valknut is a symbol of death and the afterlife, for this reason, is often associated with Odin, the god of death. It’s also known as the “knot of the slain”, as it is said to be the place where the souls of fallen warriors go.

The Eye of Odin Symbol Meaning

Let’s take a closer look at one of Odin’s most legendary appearances and sacrifices to understand more about what the Viking myths may teach us about ourselves.

In fact, If we go deeper into the myth of Odin’s eye sacrifice, we can discover that there are several interpretations, we believe Odin was attempting to teach future generations.

What can we take from this legend? This is a fantastic metaphor for how divine knowledge is gained. We are accustomed to looking for meaning through our senses on the outside. We gaze at the world and try to make sense of it; granted, knowledge may be obtained in this manner, but it only reveals the surface of things.

To properly comprehend the world, we must first understand ourselves, which is accomplished by looking inwards. To get another style of vision, we must “sacrifice” one. In other words, we should keep one eye on the ordinary, tangible world and the other on ourselves at all times.

Odin had two eyes, but decide to let go of one. Odin had two external observation sources, but he only used one. We must keep in mind that he did not completely abandon his two sources.

He preferred to keep an eye on what was going on around him. He was aware that in some circumstances, internal insights can restrict us from being flexible in order to overcome challenges and achieve our objectives.

Visual observation may keep you current and aware of your surroundings. Meanwhile, your innate wisdom assists you in considering and appreciating the issue. External observation and interior insight work together to assist us to get rid of all our problems.

Odin’s extraordinary act teaches us one important lesson: when it comes to deeper learning and self-awareness, no sacrifice is too big if the result is real enlightenment.

The same thing occurs in modern life: in order to acquire wisdom and knowledge, we frequently have to sacrifice our time, health, money, and so on.

Needless to say, the learning process will be time-consuming, but the final result (hopefully!) will be well worth the effort. After all, we rarely get what we want without a fight, so we must be persistent, consistency is one of the keys to success.

Are you passionate about Norse Mythology or Vikings ? Finding the ideal piece of Norse Jewelry can be challenging and time-consuming, especially if you lack inspiration or don’t know where to look. At Surflegacy, we have a wide range of Viking Jewelry in various styles, shapes, colors, and materials, to accentuate your Viking spirit and look.

END_OF_DOCUMENT_TOKEN_TO_BE_REPLACED

Vikings fans are finally happy to see that the latest version of the video game Assassin's Creed Valhalla is set in a world filled with...