Norse runes find their origins in the Germanic-Viking tradition and were also used by the mysterious Celtic people as a divinatory and magical tool associated with the traditional form of Druidic divination expressed through the reading of the Ogham; the pieces of wood carved with symbols representing their cryptic alphabet.

What are Norse Runes?

Although today most of the Western world writes using the signs of the Latin language (the alphabet inherited from the Roman Empire), other alphabetic systems were used before these. One of these is the Norse runes, a system of signs that arose in the regions of Scandinavia during the Viking Age and was later exported to Great Britain and parts of Central Europe.

It is an ancient alphabet, dating back to the year 150 of the Christian era, which was used both to write and to perform some magical rituals related to divination. If you want to know a little more about this interesting subject the following articles might be of interest to you how to read runes and rune meanings

These practices were passed down orally and for this reason, when reading a text on the Runes, it is possible to be faced with differences in content if the texts are compared to each other. This is due to the fact that the sources handed down refer to the memory of individuals who have collected them. What matters, however, is their effectiveness, and whatever source you use, you will find that what they say always responds to reality. They are indeed an inexhaustible source of power, possibilities, and suggestions; a very valid divinatory method used even in our days.

In Europe, especially in the north and during the Middle Ages, Norse Runes were the protagonists of various magical rituals and for this purpose are still used today especially drawing the symbols for talismanic use. Norse runes symbols tell us about everyday life and are engraved on wooden tablets or on pebbles and shells. The soothsayers throw them on the ground and read the auspices.

The Norse rune alphabet was composed of 24 signs that represented the different vowels and consonants of the Germanic-Scandinavian languages. The angular and linear writing of the runes is due to the fact that they were mainly engraved on wooden tablets, stones, and other hard materials. This made it difficult to draw curved signs, to which straight lines and angles were preferred instead 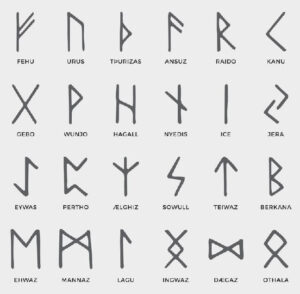 it divides the 24 runes into 3 groups (Aettir) each formed by a series of 8 runes and is named after the initials of the first 6 runes of the first group, called the Fehu group.

The Fehu group encompasses a microcosm and different purposes. It represents from the first rune Fehu, which means livestock, understood as prosperity of goods, to the eighth rune Winjo, which means joy and honors, the prerequisites for a stable and prosperous existence.

In the second group called Hagalaz, the common thread, however, is the overcoming of adversity and the unpredictability of life, and then, the questioning to get to an awareness of inner growth.

The third and last group called Tiwaz, begins with Tiwaz and ends with Othala. These 8 runes give an overview of both positive progress and negative aspects, however, ultimately providing the strong hope of spiritual growth for man.

The Norse rune alphabet can also be used to write your name or words that have special meaning to you on jewelry you wear such as rings, bracelets, and pendants, or on a specific object. 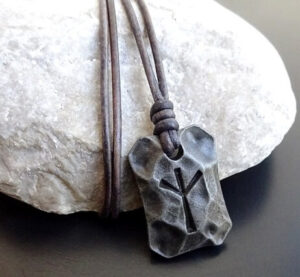 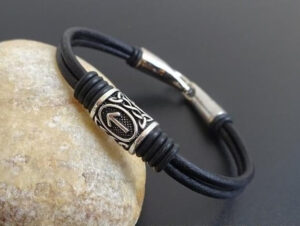 HAGALAZ  Wrath of Nature, Being Tested

JERA A Time of peace and happiness, fruitful season

URUZ Strength of Will

Are You Passionate About Viking Culture Or Norse Mythology?

Finding the ideal Viking Jewelry can be challenging, especially if you lack inspiration or don’t know where to look. Surflegacy is the final destination for the modern Viking fan looking for something different. We have a wide range of Viking items in various styles, shapes, colors, and materials, to accentuate your Viking look.

Our pieces are crafted in Italy with care and style in mind, and reasonably priced, so you won’t have to break the bank to get one. For more Norse Jewelry visit our store and let us assist you on your fashion journey.