Chakra bracelets can be considered accessories designed to balance the seven chakras, which are said to be energy centers used for centuries by Indian and Eastern cultures. These bracelets usually consist of seven stones or charms in different colors or designs, each component representing one of the chakras: root chakra, sacral chakra, solar plexus chakra, heart chakra, throat chakra, third-eye chakra and crown chakra.

While some claim that the benefits of wearing chakra bracelets come directly from the energy of the stones used, others claim that the bracelets simply promote awareness and allow for a greater emphasis on balancing these seven energies. Either way, bracelets are used in alternative medicine to promote healing and vitality. A chakra bracelet can also be worn solely for aesthetic purposes.

Another meaning of chakra bracelets is based on the power of gemstones or crystals. These bracelets use stones with special energetic properties to subtly change the life and health of the wearer. In theory, negative energy leaves the wearer and gets trapped in the bracelet. From the stones, positive energy flows and the chakras are balanced. There are many interpretations of the powers of the different crystals. The chakra bracelet can be made from many materials, but colors are very important. Each of the seven chakras is represented by a color: purple-white, indigo, blue, green-pink, yellow, orange and red. variations of these colors.

The seven chakras are often related to meditation practices and emotional healing. Each of these potential energy centers has its own vibrational frequency, and when we understand how they work, we may be able to use them to heal particular imbalances or simply to achieve better physical and emotional well-being. When a healthy person is mentally serene and happy, the energy flows balanced and smoothly. The Chakras are therefore able to transport energy from one level to another. These energy points play an important role in maintaining the health and complexity of the body’s immune system, as well as other systems. In the following chapter, we delve into the energizing and healing properties of chakra bracelets 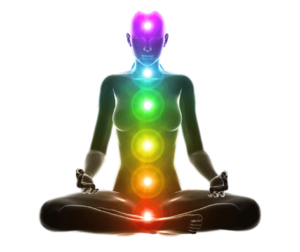 Chakra bracelets have been part of the Indian tradition worn by both female and male counterparts. For others, bracelets served simply as a way to promote awareness of the seven energies by keeping them balanced. Chakra bracelets, also known as chakra energy healing bracelets, are usually composed of seven different colored stones and their purpose and meaning is to help balance seven energy centers in the human body. Most energy healing bracelets are constructed with stones and colors for cleansing the associated chakras. Now let’s look at which wrist, right or left, a chakra bracelet should be worn on. The ancients clearly demarcated the different sides of the body and believed they performed various functions. The left side was nicknamed the feminine side, which was also called the receiving side. Basically, its purpose is to receive energy from the outside and bring it inside to cause internal changes within you. Therefore, it is believed that chakra bracelets with healing crystals should be placed on the left wrist. 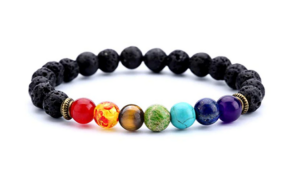 There are different colors and stones for the various chakras:

Red  for the root chakra

The root chakra is located in the perineum and controls different parts of the body such as the nose, sense of smell, lymphatic system, bone system, prostate and lower extremities.

Orange for the sacral chakra

The sacral chakra is located in the center of the abdomen and is related to the sexual organs, reproductive system and lumbar plexus.

Yellow for the solar plexus chakra

Green for the heart chakra

In your chest, the heart chakra controls the heart, circulatory system, lungs, heart plexus, and the entire chest area.

Blue for the throat chakra

It is found at the base of the throat and is associated with the bronchial or cervical plexus, which controls the throat, hands, and arms.

Indigo for the third eye chakra

This mystically named chakra is located in the center of the forehead and is associated with the temples, carotid plexus and of course the forehead.

Violet for the crown chakra

How to activate chakra body points

With meditation, listening and deep reflection it is possible to open the Chakras, restoring the flow of vital energy and stimulating the specific energy that each of them is able to spread. Let’s see how.

How to open the Root Chakra

Associated with the color red, the Root Chakra, or Muladhara, is located at the base of the spine and is responsible for the contact between man and Mother Earth. The closure or malfunction of the first Chakra results in fatigue, discomfort, indecision, insecurity, guilt, low self-confidence and difficulty in concentrating.

The Root Chakra can be activated by doing aerobic exercises, Yoga sessions and long walks, and performing a specific exercise. In a quiet and peaceful place, sit on the floor with your legs crossed. Join the thumb and forefinger of both hands and place them on your knees, palms facing up. Concentrate on the first Chakra, visualize the color associated with it and slowly emit the sound LAM with your voice. Soon you will feel a pleasant sensation of well-being and relaxation.

How to open the Sacral Chakra

Linked to the color orange, the Sacral Chakra, Splenicus or Svadhisthana, is located in the lower abdomen and controls the reproductive system and the lumbar plexus. Its malfunctioning can generate difficulties in relating to others and sexual repression.

To open this Chakra sit on your knees, with your back straight, bring your hands to your belly with palms facing up, and bring the tips of your thumbs together. Focus your attention on the second Chakra, visualize the chromatic tonality associated with it, and emit the VAM sound.

How to Open the Solar Plexus Chakra

Associated with the color yellow, the Solar Plexus Chakra, or Manipura, is located in the abdominal area, below the diaphragm, and regulates various parts of the body, including the stomach, liver, large intestine, skin and muscular system. From its malfunctioning can result in digestive difficulties, stomach ulcers, stomach acidity, chronic fatigue, sense of inferiority and dissatisfaction.

Opening this Chakra is possible with a simple exercise. Sit on your knees, with your shoulders straight. Place your hands in front of your stomach, bring your palms together and cross your thumbs. Keep this position, turn your attention to the third Chakra, visualize the color yellow and pronounce distinctly the sound RAM. At the end of the exercise, you will feel a pleasant sensation of inner cleansing.

How to Open the Heart Chakra

Linked to the color green, the Heart Chakra, or Anahata, is located in the center of the chest and is connected to the cardiovascular system and the lungs. The consequences of its malfunction are selfishness, irritability and inability to feel empathy.

How to open the Throat Chakra

Associated with the color blue, the Throat Chakra, or Vishuddha, is located at the junction of the clavicle bones and affects the neck, throat, arms and hands. Its malfunctioning can result in communication problems and closure towards others.

To unlock it with meditation, sit on your knees and cross your fingers towards the inside of your hands and join the ends of your thumbs. Focus your attention on the fifth Chakra, visualize a blue ball of light around your throat and, with your voice, slowly emit the sound HAM. It is also advisable to make rotations and movements of the neck.

How to Open the Third Eye Chakra

Associated with indigo, the Third Eye Chakra, or Ajna, is located in the center of the forehead, between the eyebrows, and governs orientation and inner wisdom. Frequent migraines, mental confusion and visual disturbances can result from its malfunction.

To open it, sit cross-legged and bring your hands to chest level, with thumbs and middle fingers outstretched and other fingers flat. Concentrate on the sixth Chakra, visualize a sphere of indigo light, full of vital energy, wrap around your forehead and emit the sound OM.

How to open the Crown Chakra

Linked to the color purple, the Crown Chakra, or Sahasrara, is located on the top of the head and controls the nervous system. Closure of the seventh Chakra can result in a tendency to dominate others, difficulty in concentration, need to always be right, mental rigidity and arrogance

To open the seventh Chakra, make sure, first of all, that you have performed the Root Chakra meditation, then sit cross-legged and place your hands at stomach level. Clasp your little fingers together, stretch them upward and interlace your other fingers. Focus your attention on the Crown Chakra, visualize a purple sphere and emit the NG sound.