The anchor is one of the oldest and most widely recognized symbols in human history. Its origins are lost to the mists of time, but its meaning is clear: stability, safe haven, and home.

The anchor has been used as a symbol by cultures around the world, including the ancient Egyptians, Greeks, and Romans.

The anchor symbol since ancient times was considered a sign of salvation, later Christianity also adopted it as a symbol, in terms of hope for the future life.

It may come as a surprise that the meanings attributed to the anchor symbol originate not from the sea but from the land! In fact, during the years when Christians were under Roman persecution, the anchor was the way they showed their religion without being noticed by the Romans

Why did the early Christians choose the anchor symbol in the first place?

Because the anchor is that thing that holds a ship steady during a storm and symbolizes strength and stability. In addition, the shape of the anchor also resembles that of the cross. With these two factors in mind, an anchor was the symbol by which a house was marked as safe for Christians seeking refuge. 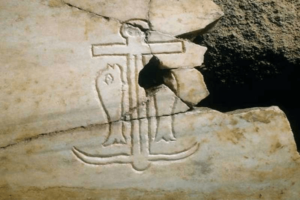 Anchor draw in the Catacomb of Priscilla Rome

What does an anchor symbolize?

The anchor is the nautical symbol par excellence and constitutes the means by which the ship obtains stability, after much sailing and after having passed through various storms. It, therefore, represents the symbol of stability, a tool that allows the ship to remain steady in the stormy ocean.

Choosing an anchor bracelet or an anchor necklace means celebrating life, the goal and all the stages, good and bad, that have led to a certain goal.

The anchor also offers a secure hold to something that by its nature is always in turmoil and in motion, representing, therefore, a firm point impersonated by friends and family, in a delicate phase of growth. It is important to note, however, that anchors are not only used to stop, they can also be used to start.

In fact, ships pull up the anchors that held them steady before they set off on their journey.

In this case, the anchor symbolizes a moment in life when we set sail on a new journey and is therefore a look forward to new adventures that will allow us to reach our goals.

Is an anchor a symbol of hope?

Yes, an anchor is a symbol of hope because it represents something that is stable and secure. In a world that is constantly changing and full of uncertainty, an anchor provides a sense of comfort and reassurance. It is a reminder that there are still things in this world that we can rely on. Anchors also symbolize new beginnings and second chances. They remind us that no matter how bad things might seem at the moment, there is always the possibility of a fresh start. For many, the anchor is a reminder that there is always something to hold onto, no matter how rough the sea may be.

The anchor is used a lot in jewelry, especially in pendants and bracelets. In fact, in the last years, they have gained more and more market.

The reason is simple the anchor is a positive symbol. The anchor bracelet or necklace is also synonymous with loyalty.

An anchor is something immovable, firmly attached to the ground: for this very reason it can be associated to both friendship and love.

It is in fact a gift that lovers exchange with frequency, symbolizing the particularly intense love that is experienced.

In love, the anchor symbol represents the two people who are in love with each other and whose lives flow together.

The anchor in fact at a symbolic level has united in itself both a symbol of masculinity and femininity.

This symbol can in fact be divided into two parts: a cross and a crescent moon at the base: the cross is a symbol of masculinity, whereas the crescent moon symbolizes the feminine womb. 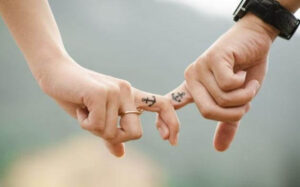 The bracelet or necklace with the anchor, in addition to the symbolic meaning, is a very nice accessory to see.  It represents in fact an excellent gift idea, inexpensive, to impress friends, relatives and boyfriends on special occasions.

On the market today you can find different models, able to satisfy the tastes of all buyers. First of all, the materials are different: it is possible to find rope bracelets, entirely handmade with high-quality materials.

The inspiration is obviously typically maritime.  There are also more valuable models, made of leather. The advantage, in this case, is obvious and lies in the greater strength and durability. 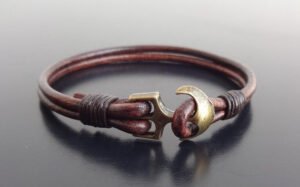 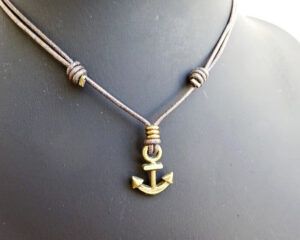 To summarize, the anchor symbol carries the following meanings:

Safety: The anchor symbolizes the safety offered by the land as the only instrument that guarantees the ship to remain steady in the stormy sea.

Faithfulness: The anchor is immovable, firmly attached to the ground, and for this reason, it can be associated both with friendship and love, couples living an intense love will often have it tattooed on them.

Stability: the anchor is also a symbol of stability, as it provides a secure hold to something that by its nature is always moving and stirring.

For these and many other reasons, which are to be found in what each one of us believes, it will be found in those who profess to be a fixed point in the lives of those around them.

There are a number of different interpretations of what an anchor symbol might mean in astrology.

Another common interpretation in astrology is that it symbolizes a stable and secure foundation, in some cases this could represent a stable relationship, a solid career, or a stable home life.

The anchor can also symbolize a deep connection to the earth and the natural world. This could represent a strong connection to nature, a love of the outdoors, or a down-to-earth personality.

The anchor is also a popular tattoo design, chosen for its meaning as well as its aesthetic appeal. Whether you’re looking for a symbol of strength and stability, or a reminder of your home and family, the anchor makes a beautiful and powerful statement.

The anchor symbol used in tattoos has the same meanings related to steadfastness, new beginning and love that we have seen so far.

Many of us, especially those a little older, like myself, will remember the famous Popeye the sailor man, one of the most beloved cartoons for children and beyond. Besides the spinach and the pipe, what is the detail that first comes to mind? Of course, the tattoo! 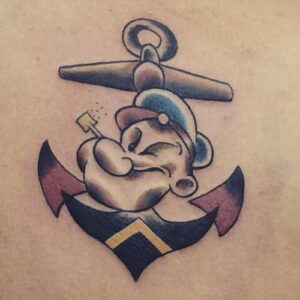 What does it symbolize, in general? Clearly the relationship with the sea, which in those who want to tattoo this image is strong and well rooted. Obviously, sailors belong to this category.

Only later did the tattoo become popular even among those who have little to do with the ocean. Linked in part to the two previous meanings is the third concept that the anchor tattoo expresses, that of stability.

The anchor symbol, in fact, in practice, provides a foothold to something (the ground), to hold firm and steady something that, in itself, is in continuous movement (the ship).

The metaphor, of course, is easy to make: the reason that would push you to make this tattoo, in this case, would be to have found a foothold in a difficult and chaotic life, and that design (the tattoo) on your body is there, as a reminder, during the trouble moments of life.

If you are looking for a tattoo that symbolizes strength, stability, and hope, then an anchor tattoo is going to be the perfect choice for you.

Where to Buy Anchor Jewelry

Finding the ideal gift can be challenging, especially if you lack inspiration or don’t know where to look.

Surflegacy has you covered. We have a wide range of handmade anchor necklaces and bracelets in various styles, shapes, colors, and materials, to accentuate your fashion look.

Our pieces are crafted in Italy with care and style in mind, reasonably priced, so you won’t have to break the bank to get one. Visit our SHOP and let us assist you on your fashion journey.