There are several reasons why cross necklaces are so popular as jewelry today, nonetheless, Cross jewelry is somewhat controversial and, while easily one of the most fashionable pieces of jewelry, it is not for everyone.

Of course, everyone has the right to their beliefs, and you can support cross jewelry or not, but only after you understand what it means.

Let’s take a look at cross necklaces and what they mean in this article.

The cross is a powerful symbol of love and sacrifice in the Christian religion, and the meaning of the cross necklace exemplifies this. It symbolizes how Jesus, God’s Son who came to earth as a human, died to save all people. He was crucified on a cross, buried, and three days later rose from the dead. 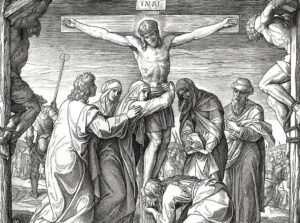 In contrast to a crucifix, which depicts Jesus’ body on the cross, the plain cross is always empty. Wearing a cross necklace is a symbol that emphasizes Jesus’ hopeful resurrection after his death, rather than the suffering he endured during his sacrifice.

The cross represents Jesus Christ’s Suffering and Resurrection for Christians. Historically, however, people would wear the cross because it was thought to offer protection against evil spirits – this belief persists to this day, and the cross is still worn to symbolize security and faith. However, it is important to note that the appearance of the cross varies depending on the denomination of the wearer. However, there should be reservations about mix and match options for the cross or even design preferences.

History of the Cross meaning

Wearing religious symbols on jewelry dates back to the Ancient Egyptians, who used their jewelry to celebrate and worship a god or belief system. When Rome became a Christian empire and the religion was no longer persecuted, the cross became popular as a Christian symbol.

Early Christians began to wear symbolic jewelry as a proclamation that identified them with their religion once it became safe to express their faith. The cross, once a horrifying execution device, has become a popular symbol of love and hope, with wearable pendants on pewter cross necklaces and silver cross necklaces.

Communicants of the Oriental Orthodox and Eastern Orthodox Churches are expected to wear their baptismal cross necklaces at all times, as stated in Canons 73 and 82 of the Sixth Ecumenical Council (Synod) of Constantinople:

All Church (Sunday) School children are required to wear a cross, regardless of how spiritually beneficial it is to them. Wearing a cross protects the child from evil forces, invites Christ’s Holy Cross grace, brings His Divine blessing upon the child, gives the child a sense of belonging to Christ, that he or she has a special identity, that of a Christian, it is a reminder that Christ is always with him/her, it reminds the child that Jesus Christ died on the Cross to save him/her, that Jesus Christ is our Only Savior and the True God.

By wearing a cross, the child feels God’s love and gains hope and strength to overcome any obstacles in his or her life.

” In the first centuries of the Christian era, persecuted adherents of the new religion used the cross as a secret symbol.”

Many Christian bishops, including those in the Orthodox Church, wear a pectoral cross as a symbol of their order.

The majority of Ethiopian Orthodox Tewahedo Church members will wear a cross attached to a chain or a matäb, a silk cord.  At the time of baptism, the matäb is tied around the recipient’s neck, and he or she is expected to wear it at all times. Women frequently affix a cross or other pendant to the matäb, but this is not required.

Wearing cross necklaces was historically prohibited in some countries, including the People’s Socialist Republic of Albania, an atheist state.

Some denominations, such as Jehovah’s Witnesses, believe that wearing a cross violates the commandments against idolatry.

What does it mean to wear a Cross Necklace?

A cross necklace is defined as any necklace that features a Christian cross or crucifix.

Some Christians believe that wearing a cross protects them from evil, while others, both Christian and non-Christian, wear cross necklaces as a fashion accessory.

Christians today frequently wear cross necklaces to celebrate and proclaim their faith. They are frequently given as gifts for religious occasions such as baptisms, first communions, Christmas, and Easter. Crosses can be given as a gift to someone who is new to faith, as a re-dedication to someone who is already seasoned in their beliefs, or as a reminder to anyone going through a difficult time to keep their faith in God.

Meaning of the cross symbol

Symbols are complicated because they are frequently heavily influenced by context. When we look at the history of the cross, we can see how it evolved from an execution device to a religious image, from a symbol of death and pain to one of hope and life. And now, the cross is not only worn as a religious symbol, but also as a fashion statement.

This modification may appear to diminish the deep, meaningful purpose of the cross as a Christian symbol. That is why it is critical that everyone who wears a cross as jewelry does so from a place of understanding and appreciation. If you understand and value the spiritual significance of the cross (and you’re reading this article, so you’re already on your way! ), it can be an important piece to add to your jewelry collection.

What does Cross Necklace mean?

The cross can have different meanings for people with different beliefs and values. Here are some ways a cross can be meaningful to you, no matter where you are.

What does wearing a cross necklace mean to a Christian? A cross necklace serves as a wearable reminder of God’s loving sacrifice and allows Christians to stay connected to their faith.

If you’re a Christian, you’re probably aware of the significance of your cross necklace. You can wear your cross as a physical expression of your faith, which can spark conversations with those around you. Or it could be a reassuring reminder to help you face life’s challenges. Your necklace can also motivate you to live your life gracefully.

What does a cross pendant mean to people who are not Christians?

The sentimental attachment to the cross is not limited to Christians. Many non-Christians are drawn to the symbol for a variety of reasons. With the variety of styles and looks available, almost anyone can find a cross necklace that appeals to them.

The history of the cross can inspire you to be strong and dedicated in your daily life. Even if you don’t practice the faith, the story of Jesus dying to save others may make you feel deeply empowered. After all, you don’t have to be religious to recognize the value of sacrifice, especially when it comes to the lives of others.

You could also wear a cross to remind yourself to have faith in love, hope, or people. It can be a motivator to become the best version of yourself, or it can be a declaration to live a life of love and caring for others.

Whatever your reason for wearing the cross, as long as you wear it with understanding and appreciation, it can be a wonderful personal piece to own.

The Cross necklace comes in a variety of beautiful designs that can be classified into various types. Each of these styles has a distinct historical and cultural significance. The following are some popular types of cross necklaces:

The Latin cross is the most well-known and easily recognized cross style. It’s also referred to as the Christian cross or the High cross. The design incorporates a cross with one arm that is longer than the other three. This simple cross is a symbol of faith with religious and spiritual significance. 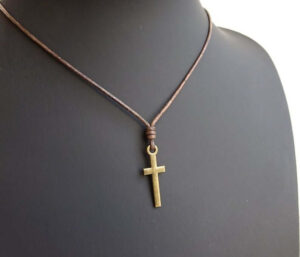 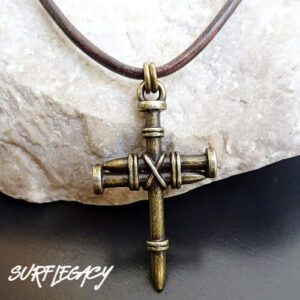 The Greek cross represents God himself. The cross’s four arms are all the same length and size.
In antiquity, the cross was used as a symbol of both religious and artistic (ornamental) significance. It was used as a pattern in ornaments, clothing, buildings, and jewelry, among other things. It is unknown when the first cross was created. 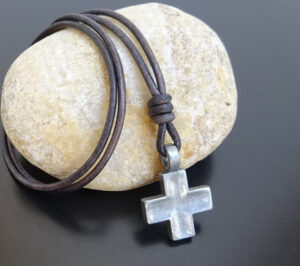 Nowadays, the terms cross and crucifix are frequently used interchangeably. There is, however, a distinction between the two. In contrast to a simple, plain cross, a crucifix cross has Jesus embodied on it. The crucifix cross represents Jesus’ crucifixion and emphasizes his sacrifice for humanity. It is a well-known holy icon and is frequently used to make cross jewelry. 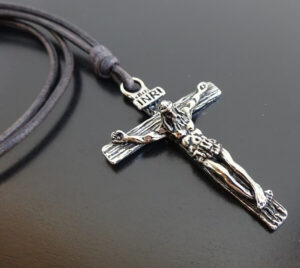 The upside-down cross, also known as the cross of Saint Peter, depicts the Latin cross inverted. It is linked to the martyrdom of Peter, the Apostle who was crucified upside-down. This type of cross is now commonly used in jewelry and is regarded as a symbol of humility.

The Celtic cross is a popular type of cross used in jewelry and is regarded as a symbol of Celtic heritage. The Celtic cross has horizontal and vertical bars, but there is also a ring at the intersection of the bars. Interestingly, the origins of the Celtic cross are unknown, with one older account claiming that it was associated with specific regions evangelized by Irish missionaries between the 9th and 12th centuries. 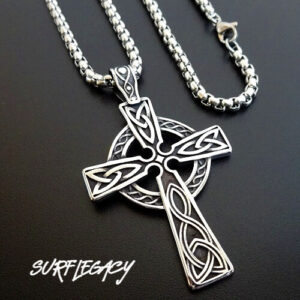 Some celebrities, Christian or otherwise, have been seen wearing sideways cross necklaces in recent years.

A sideways cross is a modern twist on the traditional version. It has a simple cross arranged horizontally on the necklace with a pendant, as the name suggests. The sideways cross has gained popularity in recent years, but its meaning is dependent on the individual wearing it. Some believe it represents Christ carrying the cross and then laying it down after his resurrection, while others believe it is an expression of self-awareness. Many people, however, agree that it simply looks cool and serves as an edgy alternative to the classic Latin cross.

The Ancient Egyptians used a looped cross called the Ankh to create this cross design. The cross represented fertility and life to them. This cross-shaped like a lowercase letter “t” has been widely used, and it is said to be an emblem that symbolizes the wooden post on which Christ was crucified, making it an important symbol of sacrifice, love, and faith.

However, the meaning of this cross has been reimagined in the modern world. Some consider it a trendy fashionable cross design, but it’s also a symbol of honor and patriotism in countries such as Norway, Iceland, Denmark, Sweden, and Finland, and other Nordic countries where the cross is seen in tombs, to signify the souls’ resurrection or, as was rumored in 1219, a sign that the gods were in favor of the Danish forces so, wearing the sideways cross represents honor and patriotism.

Cross necklaces are frequently misunderstood, but they are meaningful even to non-religious people, and as demonstrated above, there is nothing wrong with wearing a cross necklace regardless of your religious affiliations. Simply ensure that you are comfortable wearing the cross necklace. Cross pendant necklaces and crucifix accessories are more than just a fashion statement. They reflect who you are and what you believe in. It also communicates to those who see you wearing them what you’re hoping for.

If you are passionate about Cross Jewelry, Surflegacy is your final destination. Check out our Christian Jewelry selection for the very best and most unique handmade pieces. Our wide selection includes cross bracelets and necklaces for every taste and style to choose from. We are confident that our wide choice will satisfy everyone.