How to wear your faith: A guide to Christian Jewelry

Even today, many people wear them to affirm their faith and others as fashionable Accessories.

The use of jewelry is as old as mankind itself. This jewelry is made from different materials such as gold, aluminum, copper, silver, plastic, shells, etc. Some jewelry is particularly decorated with religious subjects, be it painted enamel pieces or jewelry that takes advantage of the fantastic shapes of baroque pearls.

There is a wide range of religious jewelry that a Christian can wear or give as gifts for more or less special occasions.

Meaning and importance of Christian Jewelry

Christian jewelry is not just an accessory, but has special meaning for Christians. It is not a simple desire to follow fashion or show a certain style.

Wearing religious jewelry for Christians is above all a way to make yourself authentic and to fully live your spirituality. Because of this, determining the difference between sacred and profane jewelry is often contingent on the meaning we ascribe to it.

Here is in detail the meaning of the most important Christian jewelry symbols that a Christian can wear to accentuate his faith.

Christianity has always been associated with the cross, representing the crucifix, the passion of Christ and salvation, as well as redemption and the trinity. As a symbol of God’s love, the cross recalls Christ’s suffering. It represents the faith of Christians and also the essence of Jesus Christ himself.

For Christians, the crucifix represents not Jesus’ death but his triumph over all death, allowing all believers to enter heaven. Although the terms “crucifix” and “cross” are sometimes used interchangeably, there is a significant distinction between the two.

A crucifix has an image of Christ on it, whereas a cross is empty. Another variation of the standard cross is reliquary crucifixes.

These crucifixes have a hinged opening that allows small relics from saints to be carried, which many wearers believe bestows certain gifts and/or protection on those who wear them. Crucifixes and crosses can be worn as pendants or earrings.

Although not technically jewelry, Christians wear rosaries and smaller chaplets when reciting the prayers that their bead arrangement is meant to represent.

These pieces range from simple to ornate, but each one has its own distinct beauty. Chaplets are frequently the size of bracelets, whereas rosaries can be worn around the neck or as small rings.

are extremely popular pieces of Christian jewelry, particularly among Catholics. Each medal is associated with one of the established saints and conveys a specific message.

The Miraculous Medal is one of the most popular religious medals. This piece was inspired by Saint Catherine Labouré’s visions, who was said to have received instructions for its creation from the Blessed Virgin Mary herself.

It is widely assumed that praying with the Miraculous Medal will result in the Virgin’s intervention for one’s cause. St. Christopher has also been a popular subject for Christian jewelry over the years, and his existence has been called into question by some religious officials.

Nowadays, coin pendants are mostly expensive relics or antiques. Coins bearing images of Christ and the cross were minted during the reign of Emperor Constantine. Holes were drilled through the tops of these coins to create pendants or necklaces.

Angel jewelry is extremely popular among many religious groups. Angels are widely believed to be both heavenly messengers and personal guardians, and as such, they have gained widespread popularity. Angels can be found in a variety of Christian jewelry, including necklaces, pins, and earrings. Angels are also beautiful additions to charm bracelets.

At Surflegacy we are proud of our collection of cross jewelry, that you will not find elsewhere, like our cross bracelet selection, offered in multiple variations and styles.

We prefer a more rustic approach made of simple materials, such as leather, to the classic Christian jewelry made of precious metals, this way, the new generation can approach the faith without feeling obliged to wear expensive and flashy jewelry.

Check out our Christian jewelry selection for the very best handmade pieces. 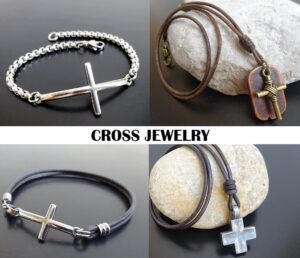 How To Choose And Wear Cross Jewelry

Religious jewelry has been around for centuries, and this tradition is carried on today through cross jewelry. Most people wear this ic...

END_OF_DOCUMENT_TOKEN_TO_BE_REPLACED

What does wearing a cross necklace really mean? Do you know the history behind it? This article will explain everything you need to kno...