In Norse mythology, Jormungandr  (also called Midgard Serpent or World Serpent ) is a giant sea serpent or a huge monster with formidable venom, and he is so long that he encircles Midgard and the world with his entire body. To complete the circle, he bit his own tail.

Son of the trickster Loki and the giantess Angrboða. Jormungand is the brother of the giant wolf Fenrir and the giantess Hel, queen of the realm of the dead. All those who die for a disease, for the age, or are considered a coward or dishonorable by the Gods and Goddesses will end up in her realm, Helheim. 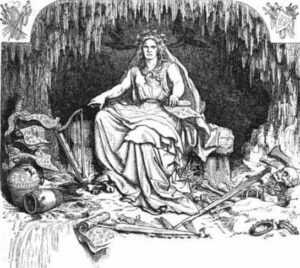 hel realm of the dead

Although in some drawings, Jormungandr is depicted more as a legged dragon similar to the Lindworm, his true representation, and ancient description is that of a true sea serpent, thus legless and ophid-like in appearance. Its original name, Midgard Serpent, confirms that it is entirely a legless serpent grew, not a dragon.

Jormungandr is the most powerful creature in all the realms. Given his mass, he possesses great beast strength and endurance. He despises all the Æsir (Norse gods of the principal Pantheon), mainly Thor and Odin, for almost to the extinction of the Jotunn (the rare race of giants with superhuman strength) described in opposition to the gods) because of a wild hunt.

Tyr (Norse god of war) was the only one who earned his respect for watching his temple and answering the horn. Jormungandr is lonely due to his size and the fact that only very few know his language. He is also very empathetic to those who have suffered his losses, such as Kratos and Atreus.

As we have already seen in the post about Loki, some prophecies had sentenced that the offspring of Loki would not be generated anything but misfortune and tragedy. For this reason, his middle child were hidden and made to grow in the land of giants (Jötunheimr) in the dark of Odin and other gods.

Odin feared the havoc these beings might cause on the universe, so he placed each of them somewhere where they would cause the least harm.

So he ordered that Jormungandr be exiled to the great ocean, where it was thought he could not harm anyone. The snake, however, had already become of considerable size, and no one succeeded in the task; Odin had, therefore, used the Thunder God Thor, the strongest of the Norse gods, to be able to raise and hurl the huge snake into the deep ocean.

From that moment onwards, he will be his number one enemy of Thor. Recluded in the ocean depths, he became so large with the time that it was said he could wrap his body around the entire world.

This is why it is called Jormungandr, which in Old Norse means “necklace of earth.”

The mouth with which Jormungandr grabbed his tail was full of sharp teeth that he used to inject his very powerful venom. His mouth was large enough to swallow a god or a whole giant.

Jormungand’s most important role in Norse mythology is as part of Ragnarok, but he also appears in two other stories, where he always clashes with Thor, his most bitter enemy. 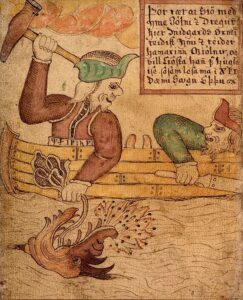 During a fishing trip. Hymir and Thor go fishing together to get dinner in an atmosphere of poor cooperation because Thor is the enemy of all giants, and Hymir does not believe in Thor’s strength. While Hymir is fishing without much difficulty, two whales hymir’s largest ox , Thor using as bait the head of an ox head named Himinrjótr, manages to capture his arch-enemy

Jormungandr, but while delivering the fatal blow with his hammer, Hymir, terrified by the furious struggle between the god and the monster, decides to cut the line with his knife, arousing, among other things, the anger Thor, because it made the sea serpent run away. Thor was very angry with the giant, but he knew he would have other opportunities to kill Jormungand.

At this point, there are two versions. According to one source, the sea serpent manages to return to the depths and save himself with prose edda. While according to other sources (which probably report a more ancient version), Thor still manages to throw his hammer toward the snake, which is then killed.

This last version would have been “corrected” later, imagining that the snake Jormungandr manages to save himself to justify his presence in Ragnarǫk. The prophecy wants the snake to rise from the waters when Ragnarok comes.

As Thor predicted, not much time had passed since his last encounter with the famous sea serpent.

One day Thor was challenged by the king of the giants, Útgarða-Loki, to a series of tests of strength. Between Thor and the giants, there was not much friendship, Útgarða-Loki was so determined to laugh at Thor’s expense.

One of the feats of strength consisted of lifting a cat, which was extremely easy. However, the cat was Jormungandr, masked by magic. Thor, convinced that he could easily pass the test, tried to lift the cat and was very surprised that he could not lift it. So proud of his strength and not wanting to lose the challenge, he committed himself with all sink beneath to be able to lift only one leg of the animal.

The giant later explained to Thor the stratagem used and told him that it was good that he could not lift the cat-snake because the enormous size of Jormungandr meant that if he had succeeded in the test, he could have altered the boundaries of the world.

By far, the most important role that Jormungandr has is the role he played during Ragnarok,

In fact, according to Norse mythology, the Ragnarök will be preceded by the Fimbulvetr, a terrible winter lasting three years, after which there will be a rupture of social and family ties, in a whirlwind of blood and violence beyond any law and rule.

Then Sól (the Sun) and Máni (the Moon) will disappear, and the two wolves (Sköll and Hati) that, over time, perennially chased the two stars will finally reach them, devouring them, depriving the world of natural light. Even the stars will be extinguished.

The cosmic tree will shake Yggdrasill, and all boundaries will be dissolved: earthquakes, floods, and ardre viii stone slab, natural catastrophes.

Creatures of chaos will attack the world: Fenrir, the wolf, will be released from his chain, while Miðgarðsormr will emerge from the depths of the waters. The infernal ship Naglfar, with at the helm the god Loki, will raise the anchors to transport the powers of destruction to the battle.

The mysterious Múspellsmegir will ride on Bifröst, the rainbow bridge, causing it to collapse. Heimdallr, the white guardian god, will blow his horn, the Gjallarhorn, to call to the final confrontation between Odin, the other gods, and the warriors of Valhalla, the Einherjar.

In the great final combat, which will take place on the plain of Vígríðr, each deity will clash with break free their nemesis in mutual destruction. The wolf Fenrir will kill Odin by devouring him, who, in turn, will be avenged by his son Viðarr. Týr and the hellhound Garmr will kill each other. Surtr will succeed in killing Freyr.

Finally, it will be the turn of Thor himself to face this exceptional representative of chaos and darkness, the serpent Jormungandr. Their fight was legendary, and the victory went into the hands of the strong god of thunder. But after killing Jormungandr, Thor was able to take only nine steps before dying from wounds infected by the venom of the giant snake. The two bitter enemies died within seconds of each other.

The last duel will be between Heimdallr and Loki, who will kill each other, after which the fire giant Surtr will set fire to the world with his flaming sword.

After Viðarr has killed Fenrir and freed the remaining body of Odin, the latter will be resurrected inside the monster.

Finally, from the ashes, the world will rise again. Odin’s sons, Viðarr and Váli, and Thor’s sons, Móði and Magni, will inherit the powers of their fathers. Baldr, the god of light, with his wife Nanna and Hǫðr, his brother, will return from Hel to the realm of death. In the grass of the new meadows, they will find chess pieces with which the disappeared gods played.

The human race will be regenerated by a new original couple, Líf and Lífþrasir, who survived by hiding in the forest of Hoddmímir or the ash tree Yggdrasill, according to the cults.

Are passionate about Vikings or Old Norse mythology?

Surflegacy, on the other hand, has you covered. We have a wide range of Viking Jewelry in various styles, shapes, colors, and materials, to accentuate your Viking spirit and look. Visit our shop here

Newer Mjolnir Thor’s Hammer
Back to list
Older The Vegvisir: A Symbol of Protection and Guidance
close