The Vegvisir: A Symbol of Protection and Guidance

The Vegvisir is a symbol of Icelandic origin that translated means “Wayfinder” is also considered a magic sigil as it was drawn on the ships so that they did not lose their course and could orient themselves even in bad weather conditions.

It is also often called with the name of runic compass. It is a symbol that is part of the magical Galdrastafir symbols.

The word “Galdrastafir” comes from Icelandic and means “magic stick” (from Galdra-magic and “Stafir”-stick) and groups all those staves of Norse origin and matrix.

According to Scandinavian folklore, a “Galdrastafir” or “Galderstav” is a magical symbol. Contrary to popular belief, these symbols do not relate to the Viking Age.

Although it has roots in both Scandinavian folk magic and Norse mythology, it also has a significant historical influence from Medieval magic and European Renaissance magic, especially in the 15th and 16th centuries.

The Vegvisir has become a very popular symbol (See also, our article Viking Symbols And Their Meanings The Complete Guide) thanks to the countless cinematic representations of the Vikings and the merchandise that has been created.

The description of this symbol appears for the first time, in the manuscript of Huld dated 1860. In this book are collected a series of ciphers for the writing of coded messages, in the last section instead we find the description of the powers of some symbols, which go from dreaming what you want, to that of protection against evil spirits, up to that of defeating an enemy. There are also references to biblical figures such as David or Solomon.

The Vegvisr found in the book of Huld consists of two symbols, whose caption reads in Icelandic: “Wear these symbols and you will not get lost in the storm or in the bad weather, although you do not know where you are”.

Note the use of the plural which means that for the spell to take place you have to wear both symbols which make us think of the Vegvisir as the combination of both symbols and not just one, which would show the lack of a name for the second symbol.

Very often the Vegvisir is associated with the ancient runic alphabet in use from the 2nd to the 8th century. 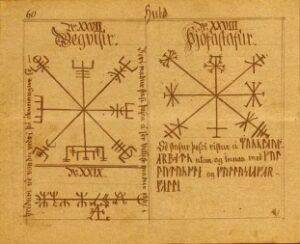 The ancient Norse legends narrate that the Icelandic Vikings, already around the end of the ninth century, very often drew it on the ships in order not to lose the route and to know how to orient themselves even in the worst weather conditions.

In many cases, it was traced with saliva, charcoal, or with blood also on the forehead or on the inside of the helmet.

Like many of the magical symbols of this matrix, also the Vegvisir needs, in order to be effective, the so-called “witness”, that is a biological component of the bearer: blood, saliva or body fluids, tissues, etc. which must be an integral part of the support on which the symbol is drawn, or be the bearer himself such “support”.

Where Does The Vegvisir Come From?

The Vegvisir seems to be part of the complex Icelandic symbols called “Pentagrams”. Such symbols are very ancient and in many pentagrams, there are graphic elements that recall runes, cabalistic symbols, and allusions to Norse gods, Solomon, and Christ.

Most of these magical symbols seem to have been designed to help solve the problems of everyday life.

This all relates back to what life was like in 17th-century Iceland. With long dark winters, poor soil for crops, and frozen seas, life was unforgiving. “Good fortune” seemed to be a key component in society, and Icelanders did everything they could to influence “luck” in their favor.

In times of famine, they would be tempted to steal from each other and disputes would escalate into violence. A certain reputation for strength and the ability to intimidate were important factors in survival, and many staves were created to allow the bearer to acquire that status and ward off negativity from themselves.”

Although the Vegvisir comes close to the Pentagrams, its symbols are foreign to them. It incorporates in itself 8 different glyphs that make it a suitable symbol for defense against many types of obstacles that could cause the loss of the right path, understood in the broadest sense of the term.

The glyphs have not yet been fully decrypted.

Meaning Of  The Vegvisir

“The symbol has a basic structure with 8 practically identical glyphs. From a common central point radiate 8 half-lines that open at the vertex in a sort of “trident” forks that symbolize at the same time transmission and reception, emanation and propagation, sending and reabsorption of energy.

It is a necessary basic structure, as in music is the pentagram, without which musical notes would have no value. The “fork” is actually a rune, the ALGIZ, and also carries with it the traditional meaning of protection.”

“Recall that Algiz represents celestial protection, vanishing suffering and fulfilled wishes. Its shape resembles that of a man with his arms raised towards the sky, a symbol of man in contact with heaven and earth.

Extracting Algiz means that we are discovering the sacred in our lives and within us and that we are recognizing and celebrating the gifts received. Algiz is the Rune of Cosmic Order, is the tension towards the absolute, the reception of strength and support” (Runemal).

It is evident, therefore, how important is the fact that the glyphs of the Vegvisir have as a basis Algiz.

The Vegvisir can be found in 3 different variants, but they do not change their original meaning. 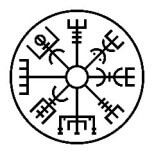 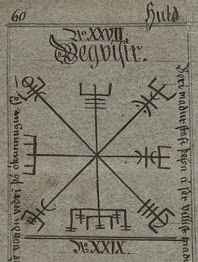 According to legends and tradition, the Vegvisir was traced or engraved on the ships in order not to lose the course, or even drawn inside the shields to help the victory in battle (exactly as happened with the Ǽgishjalmur) or even on the forehead to instill fear in the enemy during the clashes in battle.

However, there is no historical evidence that this is true, in fact it has not been found engraved on any ship or in other artifacts dating back to the Viking era, and the fact that the discovery of this symbol dates back to a manuscript of 1800 (Huld) or at most other minor writings dating back to 1600, makes it even more likely that the Vikings were not even aware of this symbol.

Is the Vegvisir a Viking Symbol?

This is a very common question and one that to date has not been able to give a definite answer.

Also in this case there is no concrete evidence that the Vegvisir was adopted by the Vikings because the first evidence of this symbol comes from another historical period, the pre-Christian period. But this does not exclude that it could have been used by the Norse populations.

Today it is one of the symbols of Icelandic culture, there are still people of the Asatru faith who use it as a symbol of spiritual guidance.

The Vegvisir is a symbol that identifies Icelandic patriotism, because it is the only one of the magical symbols that have been found only in Iceland, instead, the others were present in the various territories conquered by the Vikings.

To be used it must be engraved on materials such as bone, wood, or on the skin of a person. To activate it on a person (during the phase of the incision or tattoo) it will be necessary to add body fluids: blood or saliva. All this will be activated.

It is also mentioned by Stephen Edred Flowers in his “Galdrabòk”, although this has created even more confusion about this seal because in the original manuscript (currently located at the Royal Swedish Academy of Sciences in Stockholm there is no trace of the Vegvisir.

It is also important to remember that although its meaning is that of not losing the course and in recent years has also taken the name of the compass, the 8 arms that constitute it do not represent the cardinal points. Many glyphs in fact are made up of 8 arms, and it is, therefore, wrong to look and “read” the Vegvisir as if it were a common compass.

Final thoughts about the Vegvisir

Icelandic magic is a fascinating subject, one that eludes easy classifications and quick explanations. It’s a tradition with a long and obscure history, and so any attempt to force the order and clarity surrounding it might be wrong.

Unfortunately, the truth is that no one really knows how old Vegvísir is, or exactly where its origin comes from. The earliest evidence we have is from the 1800s; however, the symbol was already thought to be old at that time.

It is possible that it came from the Middle Ages. There may be some foreign influence involved, but this has yet to be fully established Vegvísir has only been found in Iceland, and connecting it to other symbols is based only on assumptions.

Therefore, it is fair to point out that there is no way to definitively call Vegvísir “Viking” due to the lack of evidence. However, in all fairness, Vegvísir is part of a tradition found in three books that are each inclusive of elements of Norse mythology…which can trace its roots back to the Viking Age.

Ægishjálmur (Helm of Awe) as a symbol was already known by this name in the 1600s, it is certainly not unrealistic to think that Ægishjálmur may have been conceived by Vikings, but again there is no real evidence that this symbol was ever used by Vikings.

It is still a sigil partially shrouded in mystery, and despite the many studies that have always been carried out, while everyone can speculate one way or another, no one really knows where the Vegvisir symbol came from and the secrets it hides.

Are passionate about Vikings or Norse mythology? Finding the ideal piece of Viking Jewelry can be challenging, especially if you lack inspiration or don’t know where to look. Surflegacy, on the other hand, has you covered. We have a wide range of Viking Jewelry in various styles, shapes, colors, and materials, to accentuate your Viking spirit and look.