Did Viking men and women really wear those elaborate Viking Braids as we saw them in the popular TV series Vikings? To put it briefly yes, although they probably weren’t exactly as shown by the actors. In this article, we’re going to look very quickly at the Viking braid evidence. After that, we will show you a step-by-step guide on how to get one of the most popular braid hairstyles for women that there are nowadays and finally we will take a look at some modern Viking-inspired braid styles.

Did the Vikings wear braids?

Obviously we don’t have any tangible evidence as there were no photographers at the time and all the contemporary representations we have of the Vikings are not detailed enough to show specific hairstyles, however, there is enough evidence to make us think with a certain amount of optimism that Viking braids were a popular hairstyle among them.

While hairstyles were not uniform throughout the Viking world, or in the centuries when Vikings ruled, long hair was quite popular Some argue that both men and women kept their hair long to show that they were not slaves. In fact, as we saw in one of the previous articles, slaves wore their hair very short, while only the wealthiest castes could wear it long

Having long-flowing locks was not always convenient. Viking Braids were a sensible way to keep hair, under control, both when in battle and in everyday life. At this point a question can arise spontaneously, why the Vikings wore long hair, often collected in braids? The answer is quite simple, in addition to the reason explained above, the hair was seen as a source of energy as well as nails and all those protruding parts of the body.

From the writings of Arab merchants about the Vikings we have confirmation that it was not unusual for at least some Vikings to adorn their hair with braids. Archaeological remains of what are presumed to be hair beads also indicate that this practical style was also a fashion statement.

The types of braids used depended on what the person was doing. For battle or hard work, they would opt for tight braids with a few hairs loose as a more practical style. If they were relaxing or celebrating, they might have worn their hair untied and flowing, probably accentuated with braids.

If you’re a fan of Viking braids, you probably already know and have learned how to do the ponytail braid, a single braid that starts at the top of the head. But what about more complicated hairstyles, with several braids near the head, creating a dramatic and textured look. Today we’re going to explain exactly how you can achieve these viking braids

Step 1: Prepare your hair and do not wash it

When you read about Viking braids tips, you often hear that you should skip the shower. Vikings actually bathed very often by the standard of the time, washed at least once a week usually on on Saturdays, which are still referred to as bathing days in Norse countries, and when they did, their hair was washed and cleaned as well. Remember that Viking braids are not perfectly neat or smooth, and it’s easier to create this look with your hair after not washing it for a few days. The oils in your hair will give it some natural hold and texture. Not surprisingly, this look is meant to look a bit messy and textured!

If you have very fine, straight hair (or if you’ve recently showered), you’ll want to add a little texture to make it easier. There are a few ways to do this. You can buy a texturizing spray, and this will add some grit to your locks. A dry shampoo can also do exactly the same thing. Spray it all over your hair and then run your fingers through it..

If you have very fine, straight hair (or if you’ve recently showered), you’ll want to add a little texture to make it easier. There are a few ways to do this. You can buy a texturizing spray, and this will add some grit to your locks. A dry shampoo can also do exactly the same thing. Spray it all over your hair and then run your fingers through it.

Step 3 section the top of you hair and the sides

The next step is to divide the part of your hair that you want to turn into a tight braid. You can do this anywhere on your head, top, side. For this look we’re going to create multiple braids, so sectioning your hair is key. You can use any type of hair clips that you have on hand. First, you will need to gather your hair on the top of your head. Place your fingers on either side of your forehead and trace your fingers back, gathering all the hair on the top of your head, going back. Secure with a hairpin this section that is at the highest part of your head. Once the top section is secured with a hair clip, you will need to section the hair on both sides of your head. You will have to create two braids on each side of your head, for a total of 4 braids. First, gather all the hair on one side of your head, starting from the hairline. After that create a part extending backwards from the hairline by dividing the side section of hair evenly into a top and a bottom section. Once this is done secure the top section of hair with a clip , so that you can better work with the bottom section of hair first. Do the same with the other side of the head.

Step 4 Your hair is now ready for braiding

For hair that is close to your scalp, you need to start with a small amount of hair that is in the front of your head where you are starting, adding more hair as you move down. Take a small amount of hair in the front and divide it into three equal sections. Start the weave by crossing the outer section on the right side over the top in the middle, then repeat with the left side. Repeat this again and again, but every two or three crosses, add a little more hair to the section each time you move it to the middle. You may want to do this every two or three times depending on the thickness of your hair and how many crosses it takes to move it down the head. While crossing over the top is the standard way to do your braid, you can also do all of your crosses underneath, which will make the braid stick out of your head a little more.

If we decided to put this style first, it’s not a coincidence. In fact, this simple style is a classic for a reason! Not only does it turn out to be quite easy to do, but it’s also elegant too. To make it, smooth your hair backwards and gather it into a high ponytail. Secure with a hair clip and from there, simply braid your hair down the back.

This style is very versatile as you can do it with both long and short hair, it is a great style. Usually one braid goes down the center of the head, while the other two go towards the sides to create extra coverage. 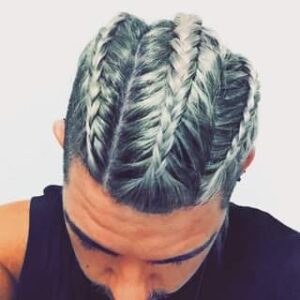 Men bun braids are for those who don’t want their braids hanging loose all the time. If you prefer that your hair doesn’t cover your face or hang over your shoulders and back, you can tie it up in a men’s chignon. Like a typical chignon, this style is great for when you need to be fashionable but don’t have the time. Some men turn it into a practical and elegant cut by braiding a thicker braid around the edges of the head, leaving the center to be styled with more intricate designs 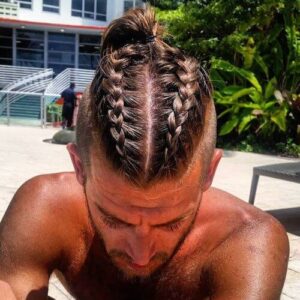 This is the ultimate style of the female Viking look, it comes in several different types of braids that work together to create an intricate hairstyle. These Viking braids offer a lot of detail, from the large braid at the crown to the smaller braids that wrap around the head. This is a perfect example of when a great old style meets the new to create a hairstyle that has become a classic in the Viking look. 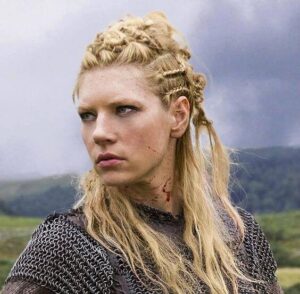 The fishtail braid is a popular type of braid, and while it’s usually associated with contemporary styles, it lends itself very well to Viking hairstyles. The large braid creates a bit of a dramatic atmosphere. Despite the intricate look, it’s very easy to pull off, as it’s just a few simple braids working together. 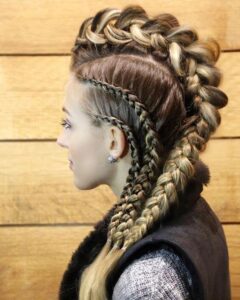 This hairstyle is Inspired by the popular Vikings series, the detailed look evokes the hairstyles worn by the character Torvi. With rows of beaded braids and a large center braid that opens up like a waterfall, this style has a lot going for it. The detail is incredible, and although it will take a while to achieve, the result is well worth it. 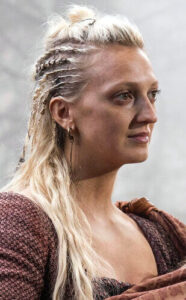 Also this style like the previous one takes its inspiration from the TV series Vikings. This time, however, the hairstyle comes from the character Freydis, who is often sporting extremely long and wavy hair.

The light blonde-gray color is an integral part of this style, because it is the hair color most often associated with Viking women. This type of braided hairstyle is a great choice if you want a Viking-inspired hairstyle that you can wear every day 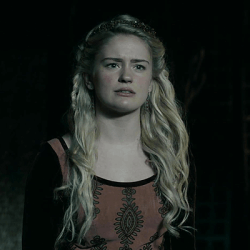 To complete this Viking High Crown Braid hairstyle, it also takes a considerable amount of time and patience It is a great hairstyle to wear to the prom or some party.  You will definitely have a royal princess look with these Viking braids. 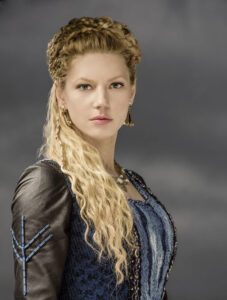 For how long do the Viking braids last?

If you’re very careful and wrap your hair in a silk scarf at night, they might last a week, perhaps a week and a half if you have African-American hair. But they are only supposed to last a day.

If you are interested in Norse Mythology and Vikings do not hesitate to visit our Viking Jewelry selection.

If you've watched the TV series Vikings you can't have missed the intricate Viking hair styles of the female protagonists and the long,...