When it comes to Norse tattoos, Viking symbology is among the latest trends of the moment. Also thanks to the popular TV series Vikings, which tells the stories of the peoples of northern Europe

Rich in mystery, complex and often linked to their deities, Norse tattoos represent the concepts of protection and strength.

The Origin of Viking Symbols And Norse Tattoos

Viking tattoos, in reality, these particular tattoos can also be called Norse tattoos because they enclose all the symbology of the northern European populations during the Middle Ages.

Norse tattoos were widespread among warriors and generally recalled strength, religion, especially related to the cult of the warrior god Odin, but also the sea, the earth and fertility.

Through these Norse tattoos, which painted shoulders, arms and face, Vikings told about their life and culture, that´s why many symbols can be found in Scandinavian legends and myths, and they were often used to frighten their opponents and enemies. Over time, this symbolism has completely disappeared, especially with the spread of Christianity.

What Are The Most Common Norse Tattoos And Their Meanings?

There are several popular Norse tattoos. To each different symbol, it is possible to connect a particular meaning.

Here are the most important ones:

Runes were the writing of the populations that came from the north and each symbol has a very specific meaning. They were drawn everywhere, on shields and helmets but also on stones and trees. They are drawings with straight shapes, easy to make, it is enough to choose the one that represents us better among strength, protection, defense, fertility, joy, movement, travel… 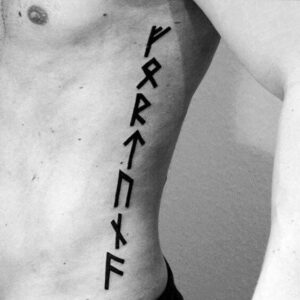 it is the symbol of this warrior deity and it is formed by three horns, which in the Viking culture were used for drinking, intertwined with each other. Present in every north-European legend, the Triple Horn of Odin can be drawn in a more stylized way or more elaborated and it is a symbol of protection. 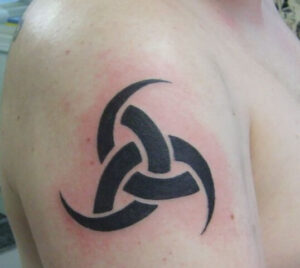 Among the most famous symbols of this culture that survived even after the Viking fall, it is composed by three triangles joined together and has a double meaning. It was, in fact, used both as a tribute to the fallen in battle, symbol of commemoration towards a lost person, but also of one’s personal survival. 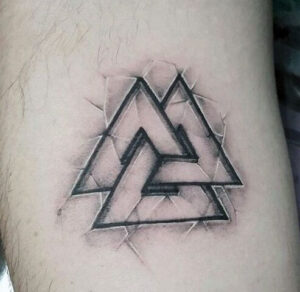 One of the most ancient symbols, literally means “thorn of sleep”, and it also appears in Icelandic magic. Its representation is very varied depending on the ages and origins but the meaning is the same, to make your enemies fall into a deep sleep and then win them.

The Tree of Life, one of the most important symbols and meanings of the whole Northern European culture. Present in many myths, it encloses the interconnection between all things in the universe and is represented by a sacred tree that rests its roots in water. The fate of men is inextricably linked to this tree, source of life. 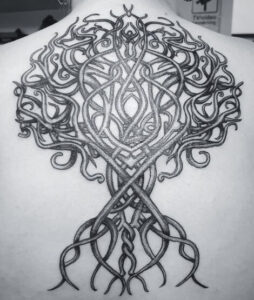 This bird appears in a multitude of flags and shields, as it was associated with one of the main gods of Norse culture, Odin. In Norse mythology, Odin is accompanied by two ravens: Hugin, symbolizing thought, and Munin, representing memory. These two animals have the task of informing him about everything that happens in his realm.

A raven is a dark, elegant bird that can be translated well into a tattoo. As with most animal designs, the raven can be designed in many ways to suit your personality and convey your meaning. For this reason, in recent years more and more people are choosing a raven as a tattoo. See also our article about Raven Symbolism 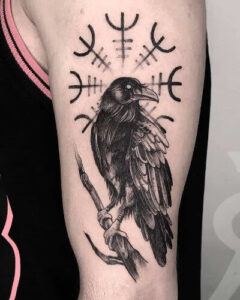 Of all the symbols in Norse mythology, the Mjolnir (See our selection here) also known as Thor’s hammer, is certainly one of the most historically significant and probably the best known today. For this reason, it is not only in demand as an amulet or bracelet, but also in the world of tattoos it is becoming very popular because it represents strength, power and honor. 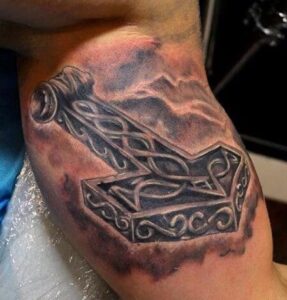 This symbol was worn around the neck as an amulet to protect against trolls and elves, was made exclusively of metal, because it was thought that this material gave additional protection against evil forces. 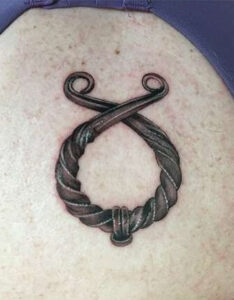 Did Vikings Have Tattoos?

This is a very debated question and you may receive an enthusiastic “yes” by asking it to Viking enthusiasts because Vikings and tattoos seem to go well together, but Is there any historical evidence? Well, ask the same question to a more cautious reenactor or historian, and you may receive an answer like “maybe” or even “no.” However, the body of a Scythian chief from 500 B.C. was found in the permafrost, in Siberia, with the skin intact from the frost which caused the tattoos to be preserved and this could be the proof we were looking for. 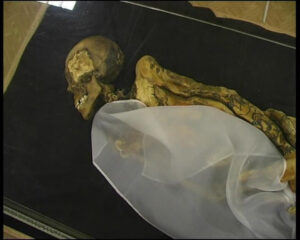