Of all the symbols in Norse mythology, the Mjolnir, also known as Thor’s hammer, is certainly one of the most historically significant and probably the best known today.

Thor has always been associated with his magical hammer. But who exactly was Thor in Norse Mythology and how he got the hammer?

Thor was the son of Odin, the king of the gods, and Jord (Jörð in Norse), the goddess of the earth. Thor represented the god of thunder and lightning, and therefore of rain and storm. He was the most powerful among those who lived in the mythical city of Asgard, the residence of the gods.  To him was dedicated the day of Thursday. He was represented as a powerful man, muscular, with a fierce and frowning look and long blond hair and beard, or red. The Vikings worshipped him and called themselves Thor’s people.

Thor traveled on a wagon pulled by two magical black goats, named Tanngnjóstr and Tanngrisnir. Thor ate them during the long journeys without ever killing them, because their flesh had the power to grow again and again, directly from their bones thanks to the hammer Mjolnir 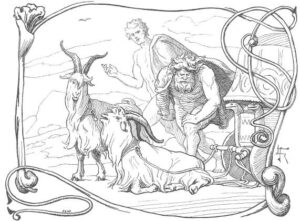 He lived in the beautiful castle of Bilskirnir and he was the husband of Sif, considered by many the goddess of fertility. It was said that she had beautiful golden hair, in which many wanted to see the symbol of harvests and grain, and that they were made by the dwarfs after Loki had cut them for spite. 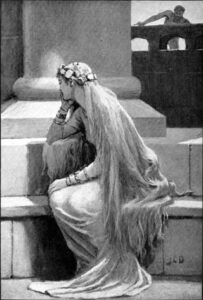 She and Thor had two sons: Thrud (or in Norse Þrúðr) and Mòdi. Mòdi was “the angry” or “the savage”, god of extreme strength and ferocity. Thrud, like her mother, was instead a Valkyrie, a goddess with the task of indicating to Odin the fate of warriors in battle. Her name meant “Strength” and it was said that one day she was engaged to the dwarf Alvi, arousing the anger of his father. To prevent the marriage, Thor had tricked Alvìs forcing him to expose himself to the rays of the sun, fatal for the dwarfs, who according to mythology are precisely forced to hide in the mines to avoid being petrified by daylight. Forced by Thor to linger on earth until the first light of dawn, Alvìs had been petrified by the morning sun, and the marriage with Thrud could not take place.

Before her marriage to Thor, Sif had been married to Orvandil and had had a first son named Ullr, depicted as an archer or a skier. He was described as a shining divinity, beautiful, perhaps a symbol of snow or the sun. It was said that with the wood of yew, a tree sacred to him, he made bows and arrows to fight demons. He lived in Ýdalir (“yew valleys”) and was the protector of fighters, but also the symbol of heaven and light. From him is thought to have derived the name of the hero “Ulysses”, belonging to classical mythology.

Thor had instead, from the giantess Járnsaxa, the son Magni, symbol of power, who had fought, along with his father, the giant Hrungnir. 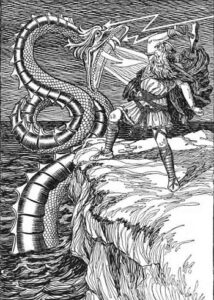 Mjolnir as symbol of power

Of him it was said that he created the lightning through the hammer Mjolnir (sometimes also written “Mjölnir” or “Mjoolnir”) It is the weapon used by the god Thor forged, according to the myth, by the dwarf Sindri, following a bet that his brother accepted with the god Loki, on who, between their family and that of Ivaldi, had managed to create the perfect weapon for the gods. 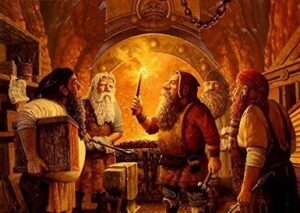 He used it in battle as a boomerang, to kill enemies and summon lightning, it could deliver such destructive blows that it could crush a mountain. Mjolnir was so heavy that only those of immense strength like Thor, a few other gods, and Jötunn could lift it. Even for Thor, Mjolnir’s weight was so great that he had to use two other magical items: a belt that could double his strength and iron gloves that he used to wear to hold and grasp his hammer on the fly.

One characteristic of the Mjolnir was its short handle. The story behind the short length of it, is that Eitri and Brokkr were distracted, while they were making the hammer, by Loki, the god of evil, who turned into an insect and buzzed around the brothers’ heads to distract them, in order to lose the bet. However, the error made did not disadvantage the god that instead could handle better the weapon, being able to throw it with one hand.

the powers of Mjolnir can be resumed as follow:

Mjolnir as a symbol of fertility

Although seen by many as a tool of destruction, Mjolnir was also seen as a symbol of fertility. Thor’s hammer was often presented in stories as a sacred object, used by Thor to bless weddings, harvests, and other celebratory events in Norse culture. The image of Mjolnir is one of the most prevalent symbols in Norse culture, appearing in engravings, tapestries, and jewelry.

Mjolnir amulets were widely found in areas with strong Christian influence including southern Norway, southeastern Sweden and Denmark. Because of the similarity of the cross with equal arms, crosses with the Christ were used, but they were reminiscent of Thor’s hammer. The form taken by these pendants varied from region to region. The Icelandic variant was cross-shaped, while the Swedish and Norwegian variants tended to be arrow-shaped or T-shaped. About 50 examples of such hammers have been found throughout Scandinavia, dating from the 9th and 11th centuries, and some examples of this type have also been found in England. As Peter Pentz of the Danish National Museum explained, it was used to transmit power and protect its owner.The meaning of the amulet is clear: “It was protective power that mattered, we often see Thor’s hammer and Christian crosses appearing together, providing double protection.” 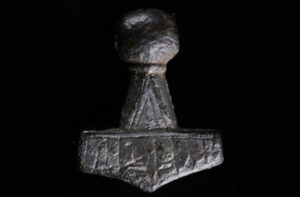 In Iceland was widely spread the practice of representing the hammer on a stone or a large mass inside the residential property, in order to protect it from attackers. This method was also used to mark the border between the various landed properties. In fact, in the Norse lands, the Mjolnir is linked to numerous rituals of protection since ancient times, and still today the production of the pendant, both as a symbol of religious faith and as a protective amulet, is spread all over the world. 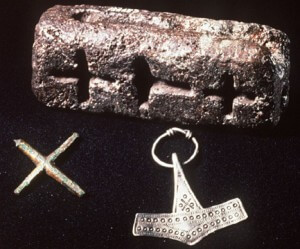 Thor is best known in popular culture today for being a superhero in Marvel Comics. This version of Thor first appeared on August 1, 1962 in Journey into Mystery #83, written by Stan Lee and illustrated by Jack Kirby, and has become one of the most famous characters in comic book history. 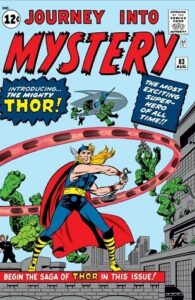 In the Marvel version, in addition to fighting Jötunn and other Norse mythological creatures, Thor also fights aliens, super-villains, and other Asgardians. Thor’s powers are much the same as described in Norse folktales, including immense strength, control over time, and near indestructibility. Thor’s personality is also much the same in this modern depiction as it is in Norse mythology. He is still portrayed as a gentle, strong, and honorable warrior and, consistent with the ancient tradition, a tough and brash individual. His goal remains the same to protect Asgard and Midgard.

Marvel, however, has made some major changes to Thor’s appearance, family, and hammer. Unlike his ancient depictions and descriptions, Marvel’s Thor has no beard and has long blond hair instead of red hair. He lacks the iron gloves Járngreipr. Thor’s family has also changed significantly in the comics. In particular, Loki is now Thor’s adopted brother instead of Odin’s blood brother. In Norse mythology, Loki had less deep and personal relationships with the other gods, instead of playing tricks on them indiscriminately without specific malice. As Thor’s adopted brother, Loki, he and Thor have a much closer relationship, a complicated history, and an acute rivalry that leads to a more complex feud. Also, Marvel’s Thor is not married to the goddess Sif and has no children. Another major difference is that he does not have indiscriminate relationships, but is in love with a human named Jane Foster. 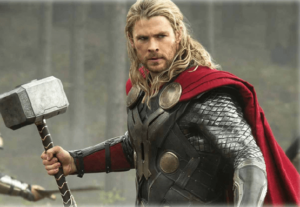 The hammer Mjolnir is given a big makeover in the comics. In Norse mythology, the hammer was an artifact that only a few powerful gods and Jötunn could lift. In Marvel’s modern version, while the hammer is still very heavy, its wielding ability is determined not by strength but by merit. Furthermore, those who were “worthy” of the hammer and wielded it gained all of Thor’s powers, something that was never described in Norse mythology. The addition of a moral element of “worthy” to being able to wield the hammer was most likely done to give Thor’s character more depth and conflict. In the Marvel comics, Thor loses his ability to wield his hammer when he becomes too arrogant and self-centered. He must turn from an arrogant brute into a humble protector in order to regain the use of his hammer. This new element of dignity attached to Mjolnir also made it a test of character for others, giving “worthy” humans the opportunity to prove their character and thus be able to wield Mjolnir and gain Thor’s powers. Another difference in the Marvel version of Thor is that Mjolnir gives Thor the ability to fly instead of relying on his goat-driven chariot for flight.

As we have just seen in this article, in Norse mythology, Mjolnir is considered a symbol of protection, consecration and blessing, but not only that, it was also considered a symbol of fertility and for this reason it was often used in wedding ceremonies. The reasons why you might want to get a Mjolnir tattoo, could be many, maybe because you are a fan of the Marvel comic book series, or, simply, you are a lover of Norse mythology. Having a Mjolnir tattoo on your body is a symbol of power and also a symbol of honor. Thor, in fact, was not only considered a strong and powerful god, but he was also the protector of Asgard, so a good reason to get this tattoo, is because you consider yourself the protector of family and home. 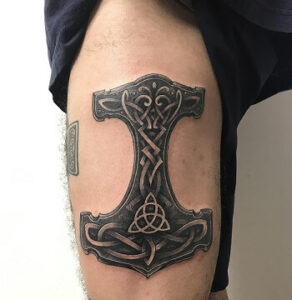 Nowadays, Mjolnir is a popular symbol in fashion, jewelry and pendants.. Like many of the Norse symbols, it is worn by both men and women as a symbol of power, strength, intrepidity and fertility, If you are looking for a true Viking symbol to wear to show your affinity with the Norse culture, do not hesitate to visit our Viking Jewelry selection

Newer Viking Axe: A Weapon of Destruction
Back to list
Older Jormungandr The Giant Serpent From Norse Mythology
close