Viking Axe: A Weapon of Destruction

When we think of Viking Age weapons, the Viking axe first comes to mind. Viking warriors used a wide range of weapons, but without a doubt, the axe is the most distinctive weapon of these Nordic people.

In addition to being iconic, the Viking axe was a surprisingly versatile asset. The Viking axe was light, fast and well balanced, allowing for quick and sudden attacks and a wide variety of nasty and clever movements 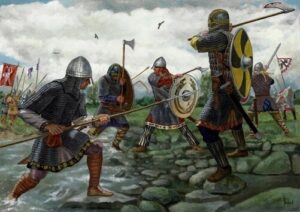 The Viking axe was often the weapon of choice for the poorest men, every farm had wood axes that could become weapons for combat. Obviously, the war axes were different from this type of instrument.

Every Viking male, with the exception of slaves, owned an axe, as it was one of the most functional and versatile tools around. The Viking axe was not only used in battle, but also in everyday life, for other equally important tasks.

Most of the Nordic people, contrary to what one may think, did not participate in raids, but devoted themselves to agriculture and domestic work.

Hunting and felling trees were primary activities and wood was used both as fuel for heating and to build ships as for the famous Drakkar, considered by many a marvel of naval engineering, which allowed the Vikings to navigate in shallow waters and to hit unaware targets quickly and silently.

Drakkar a marvel of naval engineering

There were different types of Viking axes, depending on their handling and design. the materials used in the construction were always the same: wood for the handle (mostly ash) and iron for the blade.

Sometimes the blade had a thin steel stripe along the edge. In the early Viking Age, the cutting edge measured 7 to 15 centimeters 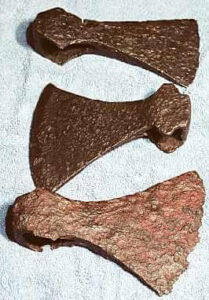 while later axes became wider. The Danish axe had a crescent-shaped cutting surface that measured 22 to 45 centimeters. 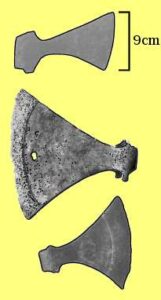 At a time when almost everything was made of wood, the variety of axe models is not surprising. Wood was used to build virtually anything such as boats, houses, wagons, and a host of other objects. As a result, its use extended to the battlefield as well.

Since horses were very expensive to maintain and difficult to transport, Viking warriors were virtually all infantry. This, along with the frequency of collisions, largely explains the abundance of axes in archaeological finds.

The axe was the weapon of choice for the common Viking warrior who could not afford a sword. Building one was much cheaper than forging a sword, certain materials were very scarce or very expensive. This was the case with metals such as iron and steel, from which the ends of swords and axes were typically made.

During the Viking Age, swords were very expensive to make, so only the rich and powerful fought with them. Swords were so valuable that they were passed down from generation to generation or buried with tribal leaders as grave goods.

Later, this type of weapon was greatly modified. Special axes began to appear, intended exclusively for battles, with smaller handles and thinner blades, they were light enough to be wielded with one hand, but still capable of inflicting a deadly wound.

Had it not been for the humble axe, the Vikings’ fighting style would have been very different and, most likely, their battles would have ended with less favorable results.

With a single blow, a Viking axe could dismember armored limbs and break shields and helmets in two.

Viking men often began using their first axe as boys. With heads made of iron or steel, axes required the use of far less metal than swords, and consequently needed less labor to make.

The Norse upper classes also recognized the usefulness of axes, arming themselves with two-handed versions that were just as effective as swords and often decorated their axe heads with ornamental designs.

Many of the Viking axes that have been found at archaeological sites had only one blade and appear to have been used primarily for cutting wood.

Over time, hand axes were improved to make them more suitable for combat and self-defense. They became lighter with wider and larger blades and a hook (called barb) was added to the lower end of the blade.

This hook had a variety of uses as discussed above. Compared to a long axe, the hand axe had a number of undoubted advantages:

It could be concealed in a mantle or behind a shield, surprising an enemy who might think he was fighting an unarmed opponent.

This Viking axe could be wielded with only one hand and allowed another weapon to be used or a shield to protect oneself.

It is also important to note that Viking axes were not used exclusively to strike at enemy forces, but served a variety of other functions, for example, the unique curvature of the blade and edge allowed Viking warriors to use their axes to grab their enemy’s weapons or shields or even appendages, to throw them off balance and drag them to the ground

Viking axes were also used to scale the walls of structures such as enemy fortresses, just as a mountain climber would do with his ice axe.

Although the Vikings in battle used axes of various shapes and sizes, two models were notable for being highly maneuverable and particularly lethal

Coming from Scandinavia, the Danish Axe began to spread in Europe around the IX-X century and already in the XI century it became one of the most loved weapons by the warrior elites (Huscarl and Varangian Guard)

In England, it was so successful that it was also known as “English Long Axe”. Obviously, the Danish Axe was a heavy infantry weapon, and needed a certain size and physical strength because of its size was necessarily held with two hands.

Many of you will think that the Danish Axe was a weapon, “rough”, suitable for those who wanted to throw blows left and right. Error. It was a weapon that to be handled needed excellent coordination that was obtained with constant training.

The handle of the Danish axe could reach 170 cm, especially in specimens of representation or parade of the Guard Variaga, but in principle, the average length was around 90-150 cm. The blade of the two-handed axes was wide but thin, not to compromise the weight, and ended at the top with a tip, so that it could be used for lunges.

The weight of a large Danish axe with a handle about 150 cm long did not exceed 2 kg, while the shortest examples did not reach 1 kg. Fighting is a very tiring activity and for this reason, it was necessary to equip oneself with weapons that were as light as possible. 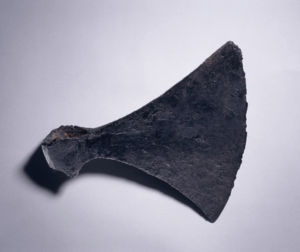 It was a particularly devastating resource if the enemy did not have cavalry or a large contingent of archers. Moreover, the sight of Vikings wielding this type of axe caused terror.

Believed to have originated in Scandinavia around 600 B.C., the bearded axe (also known as the skeggox) featured a distinct blade design that proved advantageous in battle, and for this reason, it was a rather popular type of axe.

It was so-called because the underside of the head was flat instead of pointed and thus presented a longer blade all supported by a thicker and stronger body making it devastatingly effective against shields or armor. 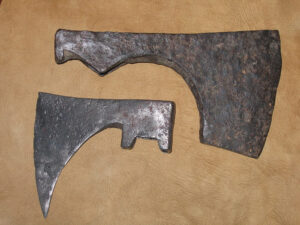 In models intended for battle, the wooden handle had a two-handed grip. The unique design of the beard also had a defensive purpose. By hooking an enemy’s weapon behind the beard, a Viking warrior could quickly disarm and strike him, and in a similar fashion, could snatch a shield from a fighter’s hand.

Another advantage of this design was to protect the hand of those who used when held behind the blade, held in this way gave more control resulting in great advantage in close combat. 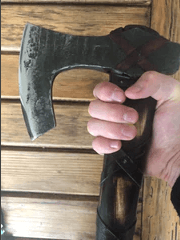 The trauma that an axe could provide was a great advantage against an armored opponent, since the weight was distributed differently than a sword, the impact was much more powerful with an axe, so even if the opponent’s armor was not perforated, it would still result in a greater amount of damage.

During the Early Middle Ages, the francisca (or francesca) so named for its Frankish origins was a throwing axe used by the Franks. It was considered a characteristic national weapon by the Merovingians from 500 to 750, and was reportedly used by Charlemagne. Germanic peoples, including Anglo-Saxons, used it at the time; several examples have been found in England.

The vikings also used it as a throwing weapon and for close combat. The Francisca throwing axes did not fly as far as Javalines, but they had a greater impact due to their weight. They also bounced unpredictably once they landed, confusing the enemy. 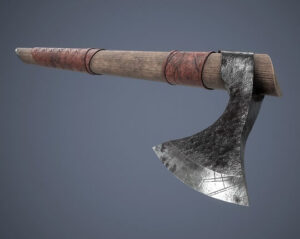 In this article focused on the Viking axe we could not forget a special mention to one of the most magnificent finds of the Viking age, a small, beautiful axe, which may have also been used as a throwing weapon, was found during the excavation of a grave in Mammen, Denmark.

The axe was dated to 970-971 AD and was found to belong to someone of high status, probably a chieftain.

This beautiful axe was made of iron with a silver inlay and it was decorated in the so-called Mammen style, which takes its name from this particular find. The style was born in 900 and survived until about 1000.

The motifs on the axe are both of Christian and Pagan nature. Though the axe haft is gone and the axe head is partially corroded, it is easy to see its beauty and elegance. 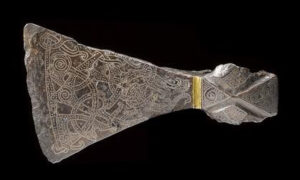 On one side of the axe we find depicted a tree, which can be interpreted as the pagan tree “Yggdrasil”, or the Christian tree “Tree of Life”.

His job is to wake up the Viking warriors every morning and when Ragnarok comes he will sing. The Phoenix, on the other hand, is a symbol of Christian mythology.

The motifs on the axe can therefore be interpreted indifferently as either pagan or Christian.

I hope this article has helped you get an idea of those glorious times. The Vikings were fascinating and energetic people.

Their tools and weapons were not only simple, but also deadly effective, and practical. With their expeditions, raids, invasions and inventions they have forever changed the course of Western history and we can surely say that the Viking axe has definitely played an important role in this.

Are passionate about Vikings or Old Norse Mythology? Finding the ideal piece of Norse Jewelry can be challenging and time-consuming, especially if you lack inspiration or don’t know where to look.

At Surflegacy, we have a wide range of Viking Jewelry in various styles, shapes, colors, and materials, to accentuate your Viking spirit and look. Visit our shop here