Sif in Norse Mythology is the Goddess of grain and fertility, married to Thor the God of Thunder, considered one of the most beautiful goddesses of Asgard, her name means “related by marriage”.

Table of Contents show
1 Who is Sif?
2 Sif and Loki’s joke
3 Sif: Differences between Mythology and Marvel
4 Shop Viking Jewelry

Famous for her long hair, shiny as and more than the sun and golden as the ears of corn, was forged by the dwarves on behalf of Thor after Loki, the god of deception and fire, had cut his out of spite.

The characteristic of golden hair supports the hypothesis that Sif could represent the goddess of prosperity and golden harvests, so much so that, she was sometimes depicted holding in her hand some ears of corn, and was indeed the wife of Thor, the god of rain and storm, which is the bearer of fertility and abundant harvests.

She is worshipped as the Goddess of fertility, agriculture and especially of harvests and so, all the myths of which her legend is interwoven, have relation with the fertility of the earth and with agricultural work. 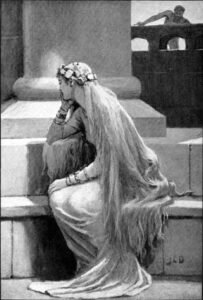 Daughter of Mandifari and Hreth, of the lineage of Aesir, she also possessed divinatory abilities and was even considered a Valkyrie. Her audacity, however, was not fueled by blind fury, nor did it ever reach the barbarity of the bloody tumult.

As a valkyrie she had the task of indicating to Odin the soldiers who would have fallen in battle and to bring them to Valhalla (the paradise of the Aesir) once fallen, where they would become Einherjar, the warriors of the god Odin, not all warriors, but, those with a thoughtful audacity, who did not use brute force to win, but only their valor, courage and fighting ability.

For this reason, she was associated with the figure of the swan, one of the animals symbol of the Valkyries along with ravens and horses. It was said that the goddess had the power to transform herself in this animal, but were sacred also the deer and the precious stones, two particularities that unite her to Freya, goddess of love and beauty.

Of Sif, it is said that before Thor she was married to Orvandil. The root “sif” is often found in some words of the ancient Scandinavian or Norse language to indicate “marriage”, but this name is also derived from archaic German and means “acquired kinship”.

From Orvandil, the ice giant, Sif had Ullr, considered the god of hunting or battles and, according to some peoples, also of snow and winter, but also of the sun and the sky. Represented as a shining god – like most of the benevolent gods of Asgard – he lived in the forests of Ýdalir, where he devoted himself to fighting demons with his bow of yew, a tree sacred to him.

He was also said to have invented skiing – an invention also attributed to the goddess Skadi – and often enjoyed using this invention of his, also made from yew wood, to descend snowy mountains. From her name and the name of the god Tyr – lord of war – it is likely that the name “Tyrol” is derived.

From Thor, Sif had instead the goddess Thrud and the god Mòdi. The first was a warrior goddess, also a Valkyrie, the personification of strength.

Legend has it that this goddess had the power to decide the good and bad weather, while Mòdi was called “the angry” or “the wild” and represented the hurricane and the storm, just like Thor.

The marriage with the Lord of Thunder, sanctioned the union between Heaven and Earth and the fertilization of the Earth through the blessed rain. 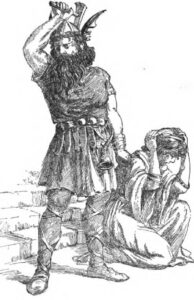 Also called with the appellation of SIBILLA, Sif, was a divinity who had a unique relationship with Nature and a particular influence on Destiny.

Men turned to her for advice and to look for solutions in times of war, offering her forms of votive bread.

The bundle of ears of corn was her symbol, but also gold, precious stones, the ox and the deer, and above all was the swan, which the Goddess loved to transform.

Happened one day that the evil and spiteful Loki, Thor’s half-brother, surprised Sif placidly asleep and took the opportunity to cut her beautiful hair and even brag about it.

When the goddess discovered that her hair had disappeared and her beautiful head had become like a “barren land punished by the raging winter”, she became discouraged.

Thor, who was so proud of the beautiful bride’s hair, was furious: cutting that hair, symbol of ripe wheat fields, was an insult to nature itself. According to some versions, Loki, the god of deception, would have cut Sif’s hair to make Thor doubt the fidelity of his wife, since the fact had happened in his absence and that among the peoples of Northern Europe it was customary to cut the hair of women who were stained with adultery.

This also explains why Thor had immediately demanded that Loki remedy the offense without waiting for the regrowth of Sif’s hair, forcing him to go to the depths of the earth to provide the bride a new hair more beautiful and shiny than before.

For this legend, the Scandinavian poets called the gold, precisely, “Sif’s hair”. LOKI, who cut her flowing hair the color of ripe wheat, can also symbolize an event of Nature: the loss of the harvest.

Loki and Sif by A. Chase

And it was of this that Loki accused her during a banquet attended by many of the divinities, claiming to have been her lover.

The banquet soon turned into a big brawl. Sure of the innocence of his wife, Symbol and Protector of the Family, Thor became very angry and severely beat the evil half-brother threatening him with death if he had not not only returned to Sif his beautiful hair, but if he had not made it even more brilliant.

Prompted by the threats and by the fury of the god of Storms, Loki reached the center of the earth where the great wizard Dvalin, of the Dwarf People, lived and convinced him to get him out of that trouble.

Devlin and the other dwarfs immediately set to work to create a “magic hair” and they succeeded in creating for Sif a hair of inimitable, extraordinary splendor, more dazzling than the glow of the sun itself.

And they succeeded in doing so thanks to the sun, of which they captured some strands that they made thin and soft, very similar to the hair of the goddess, but even more shiny and bright, even than the sun itself.

As soon as they were placed on the head of the goddess, they began to grow as if they were her own hair and soon returned to cover her entire head.

In fact, under the guise of the old man with the “gray beard”, was hiding just Loki, jealous and a bit ‘braggart that, once again, triggered the reaction of Thor.

All these elements make to presume that Sif represents, if not fertility, however the “mother earth”: being the bride of Orvandil and mother of Ullr, as well as deprived of her hair by Loki, could be the allegory of the arid and barren aspect that the earth assumes during the winter.

Instead, the marriage with Thor, who would have been able to provide her with new hair by means of the same Loki, god of fire, could represent the ability of the earth to give rise again to the crops once wet by the spring rains and heated by the fire of summer.

However, there are many doubts about her identity. It is certain that this goddess represents one of the most beautiful and interesting female figures of Germanic and Norse mythology, and justifies the fact that she was invoked by these populations as the goddess of destiny, also by virtue of her divinatory skills (another name of Sif was precisely “Sibil” or “Sibyl”), another feature in common with Freya, but also with the goddess Frigg, Odin’s wife.

Sif: Differences between Mythology and Marvel

Both in Mythology and in the comics, the goddess is romantically linked to Thor with whom she has two children. In the Marvel world, however, the two were engaged only to separate (given Thor’s falling in love with Jane) and get back together later.

She, too, however, establishes a relationship with a human named Eric Masterson at the time when her partner Thor is taken prisoner by Mephisto.

The first difference that can be noticed in the two characters is the hair. The Goddess had very long hair that was the same color as gold, while in the comics she has long black hair. In the comics, Lady Sif was the sister of Heimdall, a connection that is not present in Norse mythology or in the Marvel movies.

She was revered as the Goddess of Home, Field and Grain and was believed to have influence over fate as well.  In comic book history, Lady Sif has several abilities besides being immune to disease and natural death she is also gifted with superhuman strength and speed.

At Surflegacy, we have a wide range of Viking Jewelry in various styles, shapes, colors, and materials, to accentuate your Viking spirit and look. Visit our shop here