Heimdall (pronounced “HAME-doll” ) in Old Norse Heimdallr, is the watchman of the Norse gods, he guards the entrance of Asgard and stands still on the edge of the Bifrost, the rainbow bridge that connects Asgard to Midgard (the kingdom of humans) to prevent the passage of mortals who wanted to cross it before the time, in order to know the inaccessible place where the gods lived. Heimdall’s hall is located at the highest point on Bifröst, Himinbjorg (“cliff of heaven”), from where he stands guard at all times and drinks heavenly mead. 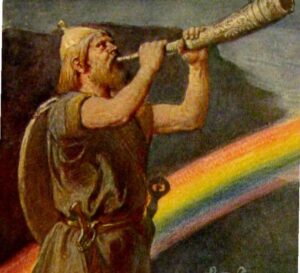 The origin of the name Heimdall is rather uncertain: it is thought to derive from “Heim”, which in German means “House, hearth”, but still today the debate is open. He was also called “The White God”, his most famous nickname, because he emanated the same white light of his house in Himinbjörg. But his appearance, although shining, had nevertheless something unusual: besides the fact of being without an ear, Heimdall was said to wear a headdress with ram’s horns and a staff made of the same horns folded on themselves. This justifies his nickname of “Folded Stick”, although in some depictions it is not a real stick, but it is the Gjallarhorn itself to have a strange shape, wrapped on itself, such as to look like a stick. Another name of Heimdall was Gullintani “Gold Tooth”, although it is not certain whether this appellation referred to his shining appearance or to the fact that he had golden teeth. It is however more probable the second hypothesis, since to the god were attributed also two golden animals, as well as the kinship with Sif, the goddess with hair forged of the same metal. Another name it is known by is Hallinskidi meaning “the one with sided horns” Heimdall in the Edda Oblongata

It was said of Heimdall that he was a god shining with light and that he was also a valiant soldier and an expert warrior. Heimdallr was also attributed with some portentous gifts, such as the ability to stay awake much longer than other deities, he needs less sleep than a bird.His sight is so keen that he can see for hundreds of miles by day or night, and his hearing is so acute that he can hear the grass growing on the ground and the wool growing on the sheep. Here he watches and listens, keeping ready the Gjallarhorn (“Ringing Horn”), which sounds when intruders approach. The sound of Heimdallr’s horn was said to be so loud that it could be heard in every corner of Asgard, and it was also said that this same horn would signal the beginning of Ragnarök (the end of the world), during which there would be the fateful clash between good and evil.

To receive these skills, he had been subjected from birth to numerous initiation rites, thanks to which he had earned the position of guardian of the kingdom of the Aesir. The first of these tests was the HeimdOr, a kind of “baptism” with which he was sprinkled with earth, drops of the icy North Sea and consecrated pig’s blood, to give him strength and courage. Later he had to give up one ear in order to obtain an exceptional hearing from the other, in analogy with the king of the gods, Odin, who had given up one eye in order to obtain all the knowledge of the universe.

Two creatures that accompanied Heimdall were the golden rooster Gullinkamb – in archaic German it meant “Golden comb” – which had the task of waking up every morning the soldiers of Odin (in Norse: Einherjar) to incite them to battle, and the horse Gultopp, whose name in archaic German meant “Pot of Gold”, as an allusion to his golden hair; however, there is doubt that it may instead be the mispronunciation of the German word “Galopp”, i.e. “gallop”. 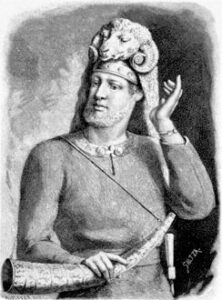 It is also recalled that the bridge Bifröst was the representation of the rainbow, a phenomenon related to rain (and therefore water) and that Heimdallr had a kinship with Thor, the god of the storm. The fact of having gold teeth could also allude to the yellow coloration of the waves of the sea at dawn and at sunset, and the nine mothers who conceived Heimdallr to the nine cycles of the sea waves.

The theme of “water” is in fact often associated with this deity: it is said, for example, of a first duel between Heimdall and Loki, god of chaos and deception, in the guise of two seals in the waters of a river, for the possession of the necklace of the goddess Freya.

Heimdall and Loki are mortal enemies. Loki considers Heimdall excessively hypocritical while Heimdall has nothing but contempt for the trickster Loki.

Of Heimdall it was also said that he would finally kill Loki during the Ragnarök (the final duel at the end of the world), but that on that occasion he himself would be, in turn, killed by his own opponent. The death of Loki at the hands of Heimdallr is another proof that the latter could be the god of water, since Loki also represented the god of fire and that in the Ragnarǫk each deity would have fallen at the hands of his alter-ego. It was told, however, that Heimdallr had already been mortally wounded a first time by means of a bullet made from a human head, and that he was then resurrected. This myth explains why among the peoples of Northern Europe the human skull was also called the “Sword of Heimdallr”, which corresponded to the mythological sword Höfund.

A very famous story of one of these encounters with Loki is about how Heimdall found and returned Freya’s treasure, the Brisingamen (an amber necklace). Loki had stolen the Brisingamen and hid among the seals to avoid detection. But Heimdall, who had been sitting quietly disguised as a seal for hours, observed. He then immediately climbed down from his rock and punched Loki in the face and retrieved the necklace for Freya. 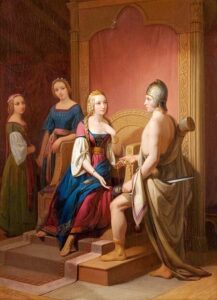 Heimdall returning the Brisingamen to Freya

The Nine Mothers of Heimdall

Himinbjörg ‘t is called, | where Heimdallr, they say,
Aye has his housing;
There the gods’ sentinel | drinks in his snug hall
Gladly good mead.

And furthermore, he himself says in Heimdalar-galdr:

I am of nine | mothers the offspring,
Of sisters nine | am I the son. Birth of Heimdall by Carl Ehrenberg

This is maybe the reason he was born with so many gifts. The nine sisters were known to be both beautiful and horrible. Their names represented the different powers of the ocean.. Heimdall’s father is Odin, the king of the Aesir tribe. According to one legend, the love between the nine maiden sisters was like no other. Their union was steadfast. As a result, when one of them decided to lie with Odin, in opposition to the wishes of their father, Aegir (the god of the sea), the other eight sisters stayed by her side to cover her disobedience.

Through Odin, Heimdall had half brothers Thor, Vidarr, and Vali. Heimdall was also related to Hodr, Bragi, Tyr and Hermod

Heimdall the Father of Mankind

In Norse mythology, Heimdall is also known as the father of mankind because he helped establish the hierarchical structure of Norse society. In the Norse poem Rigsthula, Heimdall slept for three nights with three different human couples from different social classes. In the poem, these couples are called “great-grandparents,” “grandparents,” and “parents.” The social classes were serfs, peasants, and nobles.

The Aettir, are the three groups of eight runes in which is divided the ancient runic alphabet of 24 letters and are Aett of Freya, Aett of Heimdall and Aett of tyr

The Aett of Heimdall refers to the “Great Trials of Life”, necessary to forge character, and get in touch with the deeper meaning of existence: (Hagalaz)’s relationship with death, (Hagalaz) with the pain of loss, (Nauthiz) with emptiness, (Isa) with the ability to be reborn from one’s own ashes, (Jera) to descend into the depths of the unconscious (Eihwaz) to penetrate through the central mysteries of love, (Perth) to contact the spiritual dimension (Algiz) and to finally be able to face in the fullness of choice (Sowelu) the last phase of the journey, the Aett of Tyr, which is then the last phase of life.

Nowadays, Heimdall’s character appears in a number of books, movies, video games, and comic books, but the figure of Heimdall is known above all thanks to both Marvel comics and the Marvel Cinematic Universe. He appeared for the first time in comics in the book Journey into Mystery # 85 dated 1962 . He is also present in all the films of the Marvel Cinematic Universe dedicated to Norse Mythology, Thor (2011), Thor: The Dark World (2013), Avengers: Age of Ultron (2015), Thor: Ragnarok (2017), and Avengers: Infinity War (2018). Played by actor Idrissa Elbain, as in the mythological version, he retains all his powers.

In video games we find him in Heimdall produced in 1991 and in its sequel Heimdal 2 released a few years later.

It is also found in the online battle game MOBA Smite, Tales of Symphonia, Xenogears, and Age of Mythology. In music it is mentioned in the song Rainbow Demon by Uriah Heep.

If you are interested in Norse Mythology and Vikings, do not hesitate to visit our viking jewelry store