In Norse Mythology, Vidar pronounced “HIV-dar” also spelled Víðarr, Vidarr, and Vithar, his name can be translated as The Wide-Ruling One or the Great Ruler.

Vidar is called the god of Vengeance or the Silent God. He is the son of Odin and the jötunn Grídr. Represented tall grim-faced and with dark hair, he likes to dress in dark red he carries a sword on his belt with a wide blade and wears a large shoe made of leather.

Vidar’s home is located in Landvidi (meaning ‘White or Wide Land’) in an impenetrable forest where silence and solitude reign. His home is decorated with green branches and flowers, where he lives with his mother Grid, one of the few Jötunn allowed to live in Asgard, Grid is one of Odin’s many lovers, and she is also a mentor to Thor, whom she considers a beloved stepson.

She has given him the magical iron gloves and the belt of strength that he wears, and on a few occasions, she has lent him her magical iron rod, Gridarvol.

Landvidi actually refers to the entire area, which contains green forests and many fields with long grasses.

He survives the end of the world and, together with a small number of other gods (including his half-brother Vali) who survived the disaster, participates in the renewal of the universe. 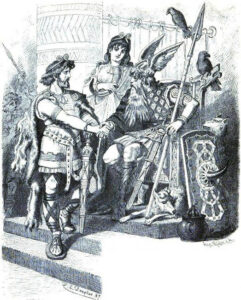 Vidar with Odin and Frigg

Table of Contents show
1 Is Vidar Thor’s brother?
2 What is Vidar god of?
3 Why is Vidar called the Silent God?
4 Is Vidar stronger than Thor?
5 Vidar and the Ragnarök
6 Surviving gods in Ragnarok
7 Vidar in Modern Culture
8 Month of the God Vidar (August 24 – September 22)
9 Conclusion
10 Buy Viking Jewelry

Other sons of Odin, had with other goddesses and giantesses, were: Thor (the god of lightning and storm), Bragi (the god of poetry), Heimdallr (the warrior god, guardian of the gods), Tyr (the god of just war), Vidar, Vàli and Hermod. Thus Vidar can be considered the half-brother of Thor.

What is Vidar god of?

Few deities in Norse Mythology personify such a simple and direct action as Vidar. This deity seems to have a single purpose to avenge his father during Ragnarok.

While little information about Vidar survives, he remains an elusive but important god in Norse mythology.

Vidar is called the god of vengeance for avenging the death of his father Odin. He is also the deity of the inexhaustible forces of nature.

Why is Vidar called the Silent God?

In chapter 11 of the Skáldskaparmál part of Snorri Sturluson’s prose reveals the kenning that may refer to Vidar ( Víðarkenningar ) he is described as follows:

“Silent god, owner of the solid shoe, enemy and slayer of Fenrir, avenger of the gods, divine inhabitant of the property of the fathers, son of Odin, brother of the Asirians.”

No one knows for sure why Vidar is called the Silent God. It could have something to do with the fact that he lives in an impenetrable and silent forest, or his role as an avenger, or even refer to how little is known about him.

It’s also possible that Vikings told other stories about him that featured him being silent, mysterious, or pensive, and perhaps Vidar earned his nickname from these very tales, which have not survived to the present day, but these are just speculations

Is Vidar stronger than Thor?

He is considered, after Thor (of whom he is half brother) one of the strongest gods.

So, in fact, Vidar in Gylfaginning, chapter 29 is described:

“Vídarr is the name of one, the silent god. He has

a thick shoe. He is nearly as strong as Thor; in him the gods have great trust in all struggles.

Vidar never intervenes in the known myths to save the gods from danger. Thor is the one who usually intervenes to resolve conflicts by force while Vidar is active only in the myth of Ragnarök

Vidar and the Ragnarök

In Scandinavian eschatology, the Ragnarök is the event that marks the end of time: the Gods will clash with the giants, in a battle in which both will die and heaven and earth will burn after the final war between good and evil.

There is nothing the Gods can do to prevent this. The Ragnarok is also the means by which the universe, now purified, will be able to begin a new cosmic cycle. It is therefore a cyclical end of the world, which will be followed by a new creation, in turn, followed by another Ragnarok, and so on, for all eternity.

In other words, creation and destruction are like points at opposite ends of a circle, where you cannot reach one without meeting the other.

Odin will fight bravely against Fenrir, but the wolf is bigger and more dangerous than anything in the world is bigger than the sun and the moon. Odin pushes himself into his throat with his spear, but all it takes is a snap of Fenrir’s jaws and the spear is gone.

Fenrir takes another bite, chews and swallows, and Odin, the father of all, the greatest and wisest of all the gods, is no longer there either and no one will ever see him again. 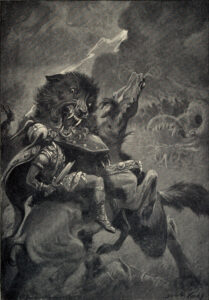 Vidar the son of Odin, the silent god the reliable god, will see his father die. Then Vidar will advance, while Fenrir rejoices in Odin’s death and will thrust his foot into the wolf’s lower jaw. Vidar’s feet are different from each other. One wears an ordinary shoe.

The other wears a shoe that has been fashioned since the dawn of time. It is made from the bits of leather that people cut from the toe and heel when they make their shoes and then throw away. If you want to help the Aesir in the final battle, throw away the leftover pieces of leather, which will become part of Vidar’s shoe.

This shoe will hold the huge wolf’s lower jaw in place and he will not be able to move. Then Vidar will reach out and grab the wolf’s upper jaw and rip its mouth in two. Thus Fenrir will die and Vidar will avenge his father. 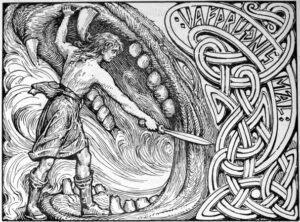 In the Eddic poem Grimnismol (stanza 17) the god Odin in disguise and under the name of Grímnir begins a long monologue about cosmogony and his deeds, evoking the prophecy that Vidar will avenge his death at Ragnarök:

But there did the son | from his steed leap down,
When his father he fain would avenge.

Other surviving gods include Balder and his brother Hod Hoenir, Njord and the daughter of Sol. 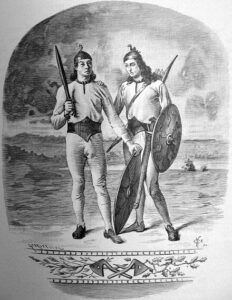 Váli is also a God of Vengeance, just like his brother Vidar. Váli was born with the specific purpose of avenging the death of his brother Baldur, and had to grow from an infant to an adult in the span of one day to complete this task.

The survivors of the Ragnarok also include two mortals Lif and Lifthrasir who had hidden in the woods of Hoddmimir and will repopulate Midgard.

Unfortunately, Vidar, unlike Thor, despite, as we have previously seen, is said to be the second strongest god in Asgard after Thor, is very little represented in modern culture.

The only notable exception is Michael Jan Friedman’s Vidar trilogy from the mid-1980s – The Hammer and the Horn, The Seekers and the Sword, and The Fortress and the Fire.

People born under the auspices of Vidar have prudence, caution, calm exterior and practicality.

They are experts in herbs and healing potions, love order, solitude and silence. On the lower plane, these people are short-tempered and vindictive.

Although Vidar played a very important role in Ragnarok and is also one of the few Gods that survived it.

However, since there is so little information about him and almost all references in the ancient Norse literature are about his role in Ragnarok, it is difficult to have a general idea of who Vidar really was and how he was considered by the Norse people.

Are passionate about Vikings or Old Norse Mythology? Finding the ideal piece of Norse Jewelry can be challenging, especially if you lack inspiration or don’t know where to look. At Surflegacy, we have a wide range of Viking Jewelry in various styles, shapes, colors, and materials, to accentuate your Viking spirit and look. Visit our shop here