What Does Until Valhalla Mean? Let’s Find Out!

In Norse mythology, Valhalla (old Norse valhöll) can be translated as the hall of the slain, it’s a hall where heroes who die in combat are brought by Odin. Valhalla is depicted as a splendid hall, roofed with shields, where the warriors feast on the flesh of a boar and drink from horns of mead.

Valhalla is a mythical afterlife destination in Norse mythology. It is often described as a great hall where heroic warriors fight every day and feast every night in preparation for Ragnarök, when they will be called upon fight at odin’s side, is widely regarded as the final resting place of great combat heroes and legendary figures alike.

Valhalla is said to be located in Asgard, the realm of the gods Half of those who die are transferred to Valhalla, while the other half are sent to fólkvangr, a realm ruled by the goddess Freyja. 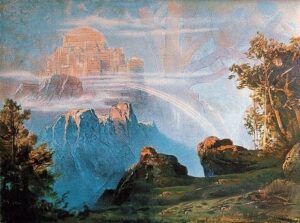 The concept of Valhalla first appears in Norse literature in the late 10th century. It is mentioned in the poem Grímnismál, which is found in the Poetic Edda, a collection of Old Norse poems. In the poem, Odin describes Valhalla as a place where there is always enough food and drink, and where brave warriors can fight and feast to their hearts’ content.

The Prose Edda, another collection of Norse myths, contains a description of Valhalla written by the 13th-century Icelandic scholar Snorri Sturluson. In his account, Valhalla is located in Asgard and is presided over by Odin. Warriors who die in battle are brought to Valhalla by the Valkyries, maidens who choose who gets to feast in Valhalla.

The idea of this afterlife place has been popular in many works of fiction, including the fantasy novel The Lord of the Rings by J.R.R. Tolkien. In the novel, the character Gandalf says that Valhalla is “the greatest of all dwellings of the gods.”

Whether you believe in its existence or not, the myth of this afterlife destination continues to fascinate people all over the world.

The phrase “Until Valhalla or “til Valhalla” (either are correct) is derived from Norse mythology, basically it means that the person will keep fighting until they die in battle. They will never give up and they will never back down, it conveys the simple but powerful message that there is no greater distinction in life than dying valiantly and honorably.

This phrase is often used by people who are facing difficult challenges. It can also be used to show admiration for someone who is facing a difficult challenge. When you say “Until Valhalla” to someone, you are telling them that you admire their strength and determination.

Although the phrase has ties to Norse mythology, its use in modern times does not imply that the person using it adheres to a specific army unit or religious belief system.

What Is The Meaning Of “Until Valhalla” In The Military?

Some professional military forces use the phrase “Until Valhalla” as an unofficial rallying cry before potentially fatal situations or as a general parting comment.

In the military, the phrase “till Valhalla” is often used to describe the ultimate sacrifice that a soldier can make for their country.

It is widely used by soldiers while saying their final words at a funeral to express their loyalty and dedication to their duty, as well as the hope that they will one day meet again in Valhalla.

The words usually elicit emotions, and it’s the same as saying to someone “see you in heaven”. The phrase is often used as a motivational tool to encourage soldiers to fight harder and never give up, even in the face of insurmountable odds. It is also a reminder that, even though they may not come back from battle alive, their spirit will live on forever.

On some occasions, the phrase is interpreted as supporting soldiers and veterans until they reach Valhalla. The Til Valhalla Project sells clothing and other items, with a portion of the proceeds going to veterans.

While this is a noble goal, there is no guarantee that many of those who benefit from the project will be chosen by the Valkyries for Valhalla when they die.

The Norwegian army’s Telemark Battalion is an elite infantry unit that served with distinction in Afghanistan as part of NATO presence in the war against the Taleban.
Major Rune Wenneberg’s regiment earned prominence in 2010 for a passionate rally held prior to clashing with enemy troops, during which the soldiers sang “til Valhalla” in unison and to rousing acclaim.
This incident not only made international headlines, but it also earned the respect of military forces and commanders all over the world.

What Was The Meaning Of “Until Valhalla” To The Vikings?

There is no direct proof or evidence to establish with certainty that the Vikings ever urged each other on before a battle with the words “until Valhalla.” However, the simple truth is that it would make no difference.
Vikings believed in Valhalla, which molded their attitudes on life as well as fueled their renowned bravery in the face of peril or death.
What is important is they believed that dying heroically in battle would earn them a place in Valhalla to serve in Odin’s mighty army, for this reason, the Vikings fought without fear of death, it was a way for them to show their courage and their dedication to the cause.
They were willing to fight and die for their beliefs, and that is something to be admired.

What Are The Requirements To Enter Valhalla?

Valhalla is a special place that only the bravest and most heroic warriors can enter. In order to be eligible to enter Valhalla, a warrior must meet certain requirements. The most important was that the warrior must have died heroically, just dying in battle was not enough; in fact, only half of them were chosen to join Odin’s army, those considered worthy by the Valkyries and the goddess Freyja. 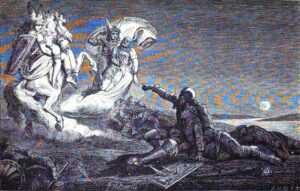 Valkyries collect the fallen by Zimmermann

First, the Valkyries choose worthy heroes to join the prestigious afterlife section. The draft is then divided into two halves. The goddess Freyja transports one half to Folkvangr, an afterlife realm described as a comfortable place with a permanent battlefield for entertainment, similar to Valhalla. The other half is destined for Valhalla.

The old Norse song Grmnismál (The Song of the Hooded One) gives the reader an early glimpse of the layout of this fabled location. In Norse tradition, Valhalla was the reward for a well-lived life.
Being chosen for Valhalla was your reward for valor, bravery, courage, and an unwavering dedication to your fellow man in battle.

How Was Valhalla Life In Norse Mythology?

Valhalla was the greatest of all the halls of Asgard, the home of the gods. It was here that Odin, the All-Father, ruler of the gods, welcomed those warriors who had fallen in battle. These brave souls would feast and drink in Odin’s great hall, waiting for the final battle of Ragnarok, when they would fight alongside the gods and defeat the giants and monsters who threatened Asgard. 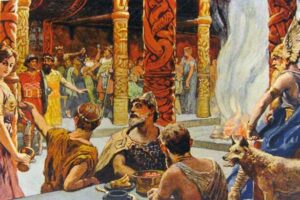 Valhalla  by Emil Doepler 1905
Valhalla was a place of great honor, and those who dwelled there lived a life of luxury and excess. The tables were always piled high with the finest food and drink, and the warriors were waited on hand and foot by beautiful maidens. It was a life of revelry and excess, and the warriors in Valhalla knew no fear. 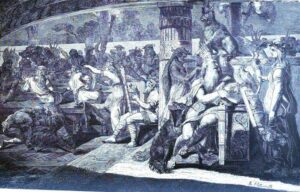 Valhalla by Zimmermann
But Valhalla was not just a place of luxury and idleness. The warriors who dwelled there were also expected to train hard, honing their skills for the final battle.
They would spend hours sparring and practicing their fighting techniques, making sure they were ready for the day when Ragnarok would come.
The life of a warrior in Valhalla was one of excitement and adventure. They lived each day to the fullest, knowing that their time in Asgard was limited.
But they also knew that their ultimate goal was to fight alongside the gods and defend Asgard from the forces of evil.

Are passionate about Vikings or Norse mythology? Finding the ideal piece of  Norse Jewelry can be challenging, especially if you lack inspiration or don’t know where to look.

Tags:
Till Valhalla
Newer Were There Black Vikings? Get The Truth
Back to list
Older Is Thor Fat In Norse Mythology? The Truth Revealed
close