Did the Vikings Discover America?

One of the few dates that people remember from their school days is that of the discovery of America: in 1492. In theory, this is correct, but as we all know Christopher Columbus was not the first European to set foot on American soil.

In fact, it has been historically and scientifically demonstrated that the first European to set foot on American soil was the Viking people, who from Scandinavia gradually settled first in Iceland, then in Greenland, and finally in Newfoundland, Canada.

Table of Contents show
1 Did the Vikings Discover America?
2 The Vikings arrived in America exactly one thousand years ago
3 How the exact year was discovered
4 Shop Viking Jewelry

Did the Vikings Discover America?

Yes, it was not Christopher Columbus who discovered America, but the Vikings.

The year is 1021 and the date emerges from the research of the University of Groningen published in the journal Nature, based on the wood of ancient boats found in Canada 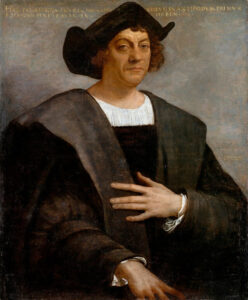 Portrait of a Man, Said to be Christopher Columbus

The Vikings arrived in America exactly one thousand years ago

There are new pieces of evidence that show that the “men of the North” arrived in America more than 400 years before the Italian navigator. And here they established a small colony.

To testify it are the rests of the ancient constructions in wood, analyzed in a search guided by the Dutch University of Groningen and published on the journal Nature result destined to rewrite history or at least to question it.

It has already been known for some years – almost certainly – that the first Europeans to reach the American coasts were the Vikings, protagonists of expeditions to destinations that were then the margins of the known world: from the Caspian Sea to the remote coasts of Greenland.

Now, however, for the first time, researchers give a precise date: it happened in 1021, exactly one thousand years ago.

The evidence of their primacy over Columbus was also given by the sagas of the Norse literature, which also referred to the exploration of the regions west of Greenland.

The first confirmations of their presence on the American continent arrived in the ’60s, with the discovery of the remains of a colony, Anse aux Meadows, on the island of Newfoundland in Canada, which however left margins of uncertainty on the precise dating.

Around the year 1000, that is 492 years before the Genoese, the Vikings landed on the coasts of North America, but of this record are found few traces in our texts of history, of any level.

Of the arrival of the Vikings to America, there are written records confirmed by archaeological evidence from excavations carried out since 1961 at Anse-aux-Meadows, on the northwest coast of Newfoundland.

Two thirteenth-century Scandinavian manuscripts, known as the “Saga of the Greenlanders” and the “Saga of Erik the Red,” tell of five different expeditions from Greenland to Vinland (“Land of Vines”).

The journeys, which took place over a decade, were organized by two sons, a daughter and a daughter-in-law of Erik the Red, the captain who in 984 had founded the first colony in Greenland, the first four were made with a single ship, the last participated in two or three boats.

The Vikings coming from Greenland created a base camp in Anse-aux-Meadows where they could winter and devote themselves to explorations to the south in search of timber and iron ore.

Archaeologists who have been excavating the settlement since 1961 have unearthed eight stone buildings, including three halls capable of housing 80 people each, a forge, a carpenter’s shop, and a ship repair shop. 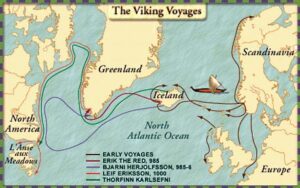 The first to land on the American coast was Leif Eriksson, son of Erik the Red. The encounter with the natives was bloody.

The Vikings killed eight natives (skraelings) who slept under their boats of skin, this provoked the reaction of other natives who attacked in force the foreigners killing Thorvald, another son of Erik the Red.

Subsequently, there were peaceful contacts and exchanges (furs against red cloth), but soon resumed the clashes. The Vikings understood that it was not possible to live under siege and decided to return to Greenland.

But it was a departure with arms and baggage, not an escape: archaeologists have found only 99 broken iron nails, a whole nail, a spindle, a bronze pin, a glass bead, an abrasive stone, a few pieces of worked wood and an iron to knit. Miserable forgotten things that assign the discovery of America to the Vikings. 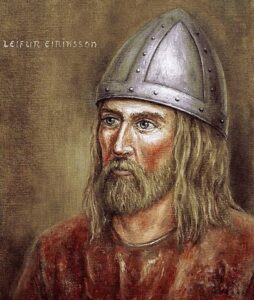 How the exact year was discovered

Dutch researchers have now managed to give a precise time collocation, analyzing a series of wooden remains worked in an unequivocal way by people who used iron, a material unknown to Native Americans. Curious how they managed to arrive at the exact year.

To trace the exact year, then researchers examined the growth rings of the logs. The pieces of wood that the Vikings had cut had tree rings still visible.

One of the rings corresponded to the solar storm and had 29 growth rings that formed later, meaning the wood was cut 29 years after a solar storm that occurred in 992 A.D. “Finding the signal from the solar storm followed by 29 growth rings allowed us to conclude that the cutting activity took place in the year 1021 A.D.,” reads the article, which bears the signature of Margot Kuitems, as the first author.

The hypothesis that dismantled the discovery of Columbus in fact had been around for a long time, but so far without any scientific evidence.

That the Vikings have been in America, and when, is therefore now certain. It remains now to understand how many expeditions have been that have reached the North American coasts.

The hypotheses indicate that the stay of the North Europeans on American soil was short, perhaps a few years. Moreover, the site of Anse aux Meadows is the only remnant of the Viking colony that has come down to us.