Harald Hardrada and the Battle of Stamford Bridge in 1066

In 1066, at Stamford Bridge in Northern England, the Norwegian army of Harald Hardrada” The Merciless fought against the Saxons of Harold II Godwinson. During the clash, as the chronicles of the time astonishingly attest, something occurred that had the supernatural about it but did, in truth, happen. A Viking warrior, whose name is lost in the mists of time:

He single-handedly barred the way for the Saxons

At the head of a mighty fleet, King Harald of Norway set sail to claim the throne of England on the field (at the urging of the traitor Tostig, brother of the Saxon Harald, ousted from office and eager for revenge).

The campaign began in the best of ways for Harald, succeeding in defeating the ranks of Count Edwin and Morcar at the Battle of Fulford. Shortly thereafter, sparing the wealthy city of York from pillage, he decided to have his men camp on the banks of the Derwent River.

Thus, on September 25, his warriors found themselves intent on enjoying a well-earned rest on the gentle banks of a river in peace and relaxation.

Harold II of England on the Bayeux Tapestry

There were those who trained for combat, those who repaired damaged armament, those who bathed, those who challenged each other to Hnefatafl (a complex Viking game much like chess), those who arranged their long hair and beards in braids and tails, those who enjoyed the local female company, and those who simply lay on the grass to restore their strength and fantasize about the future of English adventure.

In practice, no one was remotely prepared for the storm that was brewing. The Norwegians were yes aware that the army commanded by King Harold himself was on the march from southern England to confront them, but they had calculated that it would take much longer.

In addition to this, a second error occurred, because the fuss raised by the advancing Saxons was mistaken for that of a reinforcing force from the base at Riccall. Therefore, only a little less than two kilometers away did the Vikings realize the disconcerting truth.

The Saxons had already arrived

They were in the worst tactical disposition imaginable, being scattered and divided between two sides. As a result, the units on the west side had the full weight of the enemy army bearing down on them.

Then Hardrada gave the order to counter the Saxons, while at the same time trying to gradually fall back eastward to gather every warrior into a single body.

The Scandinavians greeted the charge with the wall of shields (skjaldborg), tightened in the manner of a barrier, and so a fierce fight was ignited with axes, a weapon typical of the Vikings but also by the chosen troops of Aroldo’s royal guard (housecarls).

At first, they succeeded in curbing the momentum of the attackers but, then, the lack of armor (the majority did not have time to put on their protective chain mail) took its toll, and they ended up retreating precipitously across the bridge.

In these crucial minutes, it would have been very advantageous for a rear-guard force to block the attackers as long as possible, to allow the bulk of the army to reorganize as best they could on the other side of the river.

Below, is the battle in a 12th-century painting by Matthew Paris within the volume “The Life of King Edward the Confessor.” 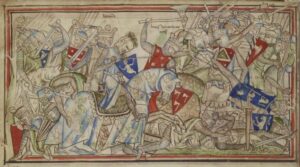 He may not have been a mere fighter, since some chroniclers of the time credit him as a berserker.

These were sacred warriors vowed to Odin who, in return, granted them the chilling berserkergang

That made them impervious to fear, injury, and made them scream like wild beasts. It really seemed that the Father of the Gods had infused them with supernatural courage in their veins, spurring them to accomplish the impossible.

And this, according to Norse religion, would open wide for him the gates of the monumental gate of Valgrind, thus entering, under the grim shadow of a wolf and an eagle, the mythical and coveted Valhalla

The rearguard, of which this warrior was a part, suddenly broke ranks and fled along the bridge. He followed his comrades to a certain point and, suddenly, stopped and then turned around to single-handedly halt the passage of the entire Saxon army (it should be noted that the bridge allowed only two men to pass at a time, making the feat possible).

The battle suffered a pause and time seemed to stand still. Everyone, as if hypnotized, stood stunned staring at the Norwegian giant. He, swinging a heavy two-handed axe, brought down devastating blows on the daredevils who dared to come under. This ignited a series of bloody duels.

It is handed down that in the narrow fighting space as many as 40 opponents remained on the ground, torn apart by horrific wounds.

Only through a stratagem could he finally be eliminated. A Saxon, taking a boat, stealthily let the current pull him under the bridge.

Undaunted, he released through the rail a lunge of a spear that severely wounded the Norwegian in one leg. The wound “slipped away” his strength and compromised his granitic steadfastness: the dam had shown a crack and now the power of the water would explode.

Thus, as he began to falter, he was swept away and torn to pieces by the enemy mass.

Other sources tell that Aroldo’s men, deeply impressed by the courage of such a champion, who had already won numerous duels and single-handedly blocked access to the bridge, did not want to kill him right away.

Either way, a legendary “Warrior Without a Name” who would not disfigure in the Norse sagas alongside such great chieftains as Harald Bellachioma or Erik Bloody Axe.

The Battle of Stamford Bridge ended with the death of Harald Hardråde, shot in the neck by an arrow.

Two weeks later Harold II was defeated by William the Conqueror at the Battle of Hastings. 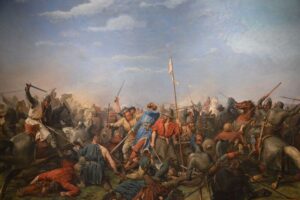 Harald is shot to death by an arrow, 1870 painting by Peter Nicolai Arbo

The End of Viking Age

This defeat is often regarded as the end of the Viking Age, because it is considered the last significant and credible invasion of the British Isles by the Vikings also political and technological changes coincided to make raids into England or attempts to conquer its lands no longer profitable.

Our jewelry is designed to be worn every day, no matter where you go or what season is. Are you ready to step up your wardrobe game?

Newer Who Were the Vikings? [Get the Facts]
Back to list
Older Did the Vikings Discover America?
close