Viking ships represented one of the highest expressions of northern European naval technology between the 9th and 13th centuries. Built to be fast, light, and durable, they possessed characteristics that made them vessels suitable for the open sea and navigation in the shallow waters of coasts and rivers.

The Norse peoples mainly used ships: warships, and vessels to transport goods. The former was long, light, and fast, while the latter was built focusing on strength and cargo capacity.

The vessels used for wartime expeditions were not true warships in the modern sense of the word but dragon ships for transporting troops. Not having heavy weapons or rostrums capable of damaging enemy merchant ships, they often became true floating platforms that allowed the Norse infantry to attack the enemy hand-to-hand.

The Viking ship used in warfare were characterized by a long hull, thin and light, with a draft often less than a meter that allowed not only to overcome a shallow and treacherous, but also to land on any beach simply by dragging the boat on the shore. The ratio of length to width was generally 7 to 1.

One of the characteristics of many Viking sailing ships (except those used for the transport of goods or long sea voyages) was the symmetrical structure: the bow and stern were almost identical and allowed the boat to maneuver in an agile and fast, making quick changes of course without having to make circular maneuvers.

This feature was very useful in skuldelev ships when navigating between icebergs and sea ice, a situation in which fast maneuvers and sudden direction changes are required.

War ship had two methods of propulsion: sail and oars. On the open sea, sails made it possible to travel much faster than oars and to cover long distances without tiring the crew unnecessarily.

The sails could be hoisted or lowered very quickly: according to some tests carried out on modern reproductions of Norse boats, in just 90 seconds, it was possible to install the mast and unfurl the sail.

The ships were not equipped with benches for rowers: to save space, the crew sat on crates that contained their personal belongings, crates large enough to allow a rower to sit at the right height to maneuver his oar.

The structure of the hull of a warship allowed to reach incredible speeds for a boat of the time: the average speed of navigation was about 9-18 km / h, but in favorable conditions, a Viking ship could reach the maximum speed of almost 30 km / h.

Viking ships can be classified according to the characteristics of the hull or construction details, but the most common classification is based on the number of positions for rowers.

The karvi (or karve) vessel is the smallest of the Viking ships: to be suitable for military use, it had to have at least 13 oarsmen’s seats, although any vessel with 6 or more seats (up to 16) was generally classified as a karvi.

These ships had a length-to-width ratio of 4:5:1 and were “multi-purpose” vessels used for trade and troop transport in war. The evolution of karvi enemy ships, the Knarr, allowed for long ocean voyages during the era of Viking expansion.

Knarr-type such ships were employed for long sea voyages and the transport of goods. The wide, deep, and shorter hull than the battleships (with a length/width ratio very similar to that of the karvi) made these vessels capacious and maneuverable by a small crew.

Knarr’s were generally 16 meters long, 5 meters wide, and could carry up to 24 tons of cargo. Using the Knarr, the Norse peoples explored the Mediterranean, traded goods along the Baltic, and transported supplies to colonies as far away as the Atlantic, such as Iceland and Greenland.

The snekkja was a thin military ship equipped with at least 20 places for rowers and capable of carrying 41 men. It was generally 17 meters long, 2-3 meters wide, and only half a meter draught.

These skuldelev ships was the most common military vessel. The Norwegians built snekkja with a deeper draught than the Danes to cross the fjords easily and overcome the Atlantic climate without too many problems.

These cargo ships did not need ports to dock: they were transported to the shore or beached. Their low weight also allowed them to be carried “by hand” over small stretches of land. 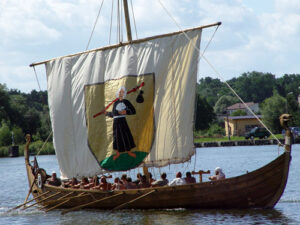 Warships larger than snekkja and equipped with at least 30 seats for rowers. A skeid could carry 70-80 men and could exceed 30 meters in length. The Roskilde 6, a Viking skeid discovered in 1996 and dating back to 1052, was an impressive 37 meters long.

A new type of boat was designed, extraordinarily fast for those times and made of solid oak, which represented a real advancement in nautical engineering, the “Drakkar” (also called “Dragon Ship”), which soon became a fearsome weapon of war.

The Drakkar became the Vikings’ strong point, a vessel with its bow-shaped like a dragon or snake, so fast and strong that it could sail up rivers and face the ocean.

Thanks to these Drakkar, the pagans from the northern lands could plunder England, a land that the sea had always protected. Thus began the early Viking Age, which led the “people of the dragon” to push throughout the West, conquering Paris, the Russian steppe, the Roman Empire, and Moorish Africa.

No people were saved from the ferocity of their assaults, so soon, the whole of Europe had to succumb to the attacks of these mysterious people of the north.

Our information about Viking Drakkar comes primarily from historical sources and sagas. The only difference between a skeid and a Drakkar was the type of decoration on the hull: Drakkar had carved bows shaped like threatening beasts such as snakes or dragons.

According to one of the interpretations provided by archaeology, these decorations served to keep at bay the sea monsters that, according to Norse mythology, populated the sea; the decorations of the Oseberg ship Drakkar instead seem to have been performed as part of the funeral ritual of the two women buried in the boat. 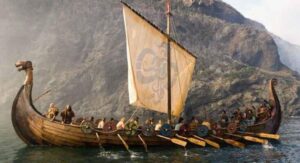 Made in oak wood discovered in the Nydam peat bog dating back to 310-320 AD. Of the boats found, the largest, more than twenty-three meters long and four wide, was able to carry up to forty warriors and was pushed by fifteen pairs of oars to confirm that these populations operated in a coastal and limited range of action.

The Viking successors, centuries later, widened their range of action and improved the construction technique, thanks to the woven sails made impermeable by grease and tar. The ship of Nydam, the only one still entirely preserved, is considered among the most ancient Nordic rowing boats. Viking ship museum in northern Europe have this ship. 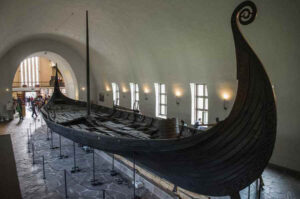 The drakkar of Oseberg

Not exactly a Drakkar but a karvi, it is 21 meters long and 5 meters wide, with a 10 meters high mast. It is estimated that the sail had a surface of 90 square meters, allowing the boat to reach a speed of 10 knots.

It is one of the three best preserved Viking ship museums in the world, along with those of Gokstad and Østfold: if you visit it, it will seem as if just built.

The ship should date back to 834 AD and was found together with two skeletons of women and is currently kept, along with another dozen of the time, in the museum of Viking ship burials in Oslo. This ship is one of the most important finds ever from the Viking Age and is also a great artist and a technical masterpiece.

It is built almost entirely of oak wood, and In the boat, there are 15 pairs of holes for oars, a wide rudder, and an iron anchor in oseberg ship burial. The bow and the stern are decorated with complex engravings in the characteristic zoomorphic Oseberg style.

It is believed that the ship, though intended for navigation at sea, was used exclusively to travel along the coast with ship burial. The skeletons found buried with the ship must have belonged to two women, one old, the other young, of high rank, probably related to royal Vikings.

To strengthen the hypothesis of the noble lineage of the women, in addition to the two skeletons, were also found 14 horses, an ox, and three dogs. There were probably also precious metals inside the tomb, but it was likely stolen in past centuries.

This does not detract from the fact that 4 finely decorated sleighs and a four-wheeled cart richly inlaid were found. Among the objects of common life were woolen clothes, imported silk fabrics, and small tapestries.

Ninth-century vessel was discovered in Gokstad, Norway. It is currently the largest Norwegian Viking ship ever unearthed: it is 23.80 meters long, 5 meters wide, and was probably capable of housing 32 oarsmen and a 110-square-meter sail, capable of propelling the ship at a speed of about 12 knots.

The remains of the ship of Gokstad were together with the skeleton of a man, certainly the owner of this precious tomb, which circumstantial evidence indicates in Olaf Gudrødsson, a Viking king minor who died a violent death around 50 years, following a dagger wound in the right thigh.

In addition to the ship and its owner were found three other small boats, a tent, a sled, and horse harnesses needed to ride. No weapons or valuables were found, which indicated the passage, before the archaeologists, of unknown grave robbers. 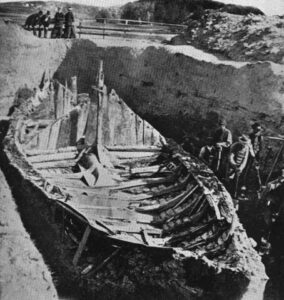 The largest Viking ship ever discovered: an impressive 36 meters long, it was discovered in Roskilde, Denmark. In 1070, the ship was deliberately sunk, along with four other boats, to block the sea access to the city of Roskilde.

Eera was a boat designed and equipped for the war fleet that could carry up to one hundred warriors perfectly armed and ready for any raid along the coasts of Europe. It is thought that it was part of a royal fleet.

Finding the ideal piece of Viking Jewelry can be challenging, especially if you lack inspiration or don’t know where to look. Surflegacy, on the other hand, has you covered. We have a wide range of Viking Jewelry in various styles, shapes, colors, and materials to accentuate your Viking spirit and look.

Newer Viking Diet – What Did The Vikings Really Eat?
Back to list
close