These ancient inhabitants of that area of Northern Europe which corresponds to the current Scandinavia and Denmark, also famous for their strong body and their warrior connotation, as for food, they had to make do with what their territory offered, not much to tell the truth.

The climate was in fact too harsh to allow the growth of many species of vegetables and the snow, which for all the long winter months from October to February completely whitened the landscape, only worsened the situation. The possible crops were barley, oats and rye.

The activities the Vikings engaged in were farming, animal husbandry and fishing. Meat from livestock played an important role in the Viking diet and included beef, goat, pork, sheep, chicken and duck.

What they could not get from agriculture and from the animals they raised, they got from fishing and hunting. The Viking diet was hyperproteic, probably, this was the reason for the undisputed physical strength of the Norse warriors. Being able to physically dominate the opponent gave them a distinct advantage in battle, allowing them to handle with ease and dexterity the weapons used.

In what consisted, the typical Viking Diet?

This is a very frequently asked question by Viking fans and answering has not been an easy task for historians due to the almost total absence of written records. Nordic people, in fact, handed down their memories and traditions almost solely orally.

Vikings used oats and barley to make a flour, which was then made into a flatbread that was baked on a griddle. Some of the grain was also fermented and processed to make Viking beer. Although small in size, the average farm was more than enough to provide enough food for the people who lived there, allowing them to be self-sufficient. In addition to this, the Norse grew a fair variety of vegetables, the contribution of which was of considerable importance in the preparation of true Viking food.

The Viking diet, was therefore based on a great caloric intake, derived from proteins, but meat and fish were not the only sources of food. Many animals, in fact, were not bred only for the consumption of meat, but also for the additional resources they brought.

The Norse milked their cows to satisfy the need of milk which was also used to produce cheese, skyr, curd and butter. They also collected duck and chicken eggs, which were a constant element of their diet. As already mentioned, they were skilled fishermen and hunters. They fished for whatever fish was available to them both in the ocean and in the rivers. Fishing was in fact such an important part of the Viking diet that it is estimated to represent 25% of their diet. 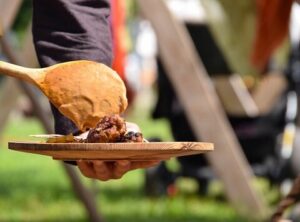 The cooking of the Vikings, therefore, had to adapt to the limited possibilities offered by nature. The greatest resource for their meals was represented by hunting and consequently, meat was one of the basic dishes of their gastronomy. 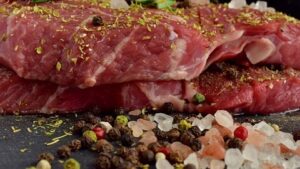 On their tables every day appeared different kinds of animals, roasted or smoked, but one of the most delicious dishes, to be reserved for special occasions, was snake in casserole, usually flavored with garlic and thyme. Even cheeses were very appreciated.

The first meal of the day, “dagmál” or “meal of the day”, was very large and was usually eaten one or two hours after the start of the daily tasks. For the dagmál, adults used to eat a portion of leftover stew from the previous night’s meal. In addition to this, they also usually ate some bread and fruit where available.

The second and final Viking meal of the day was known as the “náttmál”, or “night meal”. This was served at the end of the working day, usually around 7 and 8 pm, and served as dinner. Women, assigned to the kitchen, were in charge of the preparation of the recipes. The evening meal usually consisted of a fish or meat stew cooked with vegetables.

The stew was accompanied by bread and, occasionally, fruits or nuts sweetened with honey, the only sweetener at their disposal

The “cutlery” of Vikings consisted in wooden bowls and knives, forks and spoons. 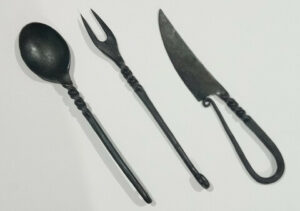 Drinks, especially beer and mead, were served inside ox horns; the custom was to drink all the contents in one big gulp, so that the horn could be placed on the table again only when it was completely empty. In practice, an invitation to go on a binge, which was not at all rare during the Vikings’ lunches. the Vikings also produced excellent beer. Recently some historians have found traces of burnt barley in the Viking camps of Greenland and it seems certain that they were able to produce excellent beer during their oceanic crossings. This beverage also had an important role in rituals and religion and, for example, it was drunk on the seventh day after the death of a dear extinct as a commemoration.  According to Viking beliefs, the bravest warriors received cups full of beer at their arrival in paradise (Valhalla) thanks to the generosity of ‘Heidrunn’, a giant goat that instead of producing milk produced beer.  Moreover, Vikings believed that during the fermentation process this beverage released a vital energy propitiatory to war.

The Vikings were famous and feared around the world for their exquisite skills of plunder, pillage and depredation, qualities that have remained in history. In this article we discussed what their diet was, what they drank and how they produced their food.

It emerges a different portrait from that usually reported, that of a violent people and inclined to war. On the other hand, the Vikings also had to cook, sow the fields and dedicate themselves to breeding, just like all the other populations.