Surtur Norse Mythology – The Giant With The Flaming Sword

Norse Mythology is rich in tales of gods, giants, and all sorts of other eerily magical beings. One of the most mysterious Norse myths is that of Surtr, a fire giant who stands ready to destroy the world at the end of its time.

This article takes an in-depth look at everything you might want to know about Surtur as a Norse god. Read on to learn more.

Surtur, (Old Norse Surtr, “black” or “the Swarthy One) also spelled Surt, is a giant of fire. Although he was a jötunn, Surtr did not live in Jötunheimr.

Instead, he spent his life guarding the border of Muspelheim, one of the nine worlds in Norse mythology. 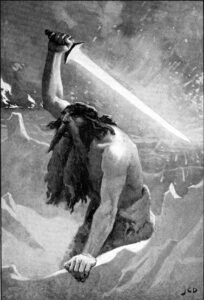 The Giant with the Flaming Sword (1909) by John Charles Dollman

Surtur is said to be with Loki one of the most feared creature in all the nine worlds.

He is the sworn enemy of the gods and will eventually bring about Ragnarok, the end of the world. His fate is to slay Freyr and then be killed by him.

Völuspá is a composite of two different versions of the same poetry discovered in two independent manuscripts: Codex Regius and Hauksbók. While many parts in both poems are identical, each copy has unique lines and verses and arranges the existing verses differently.

Surtur is attested in the poem Völuspá (Hauksbok version) from the Poetic Edda, where a völva tells the god Odin that, during the events of Ragnarök, Surtr will rise from the south and that his sword will be so bright that it will light the world on fire.

Völuspá is a composite of two different versions of the same poetry discovered in two independent manuscripts: Codex Regius and Hauksbók. While many lyrics in both poems are identical, each copy has unique lines and verses and arranges the existing verses differently.

Surt comes from the south
with the bane of branches;
shines from his sword
the Val-god’s sun.

The following stanza 43 describes Odin being murdered by the wolf Fenrir, and Surtr going to combat against “Beli’s bane,” a reference to the deity Freyr, who slaughtered the giant Beli.

Then comes Hlin´s
second grief,
when Odin goes
to fight with the wolf,
and the bright slayer
of Beli with Surt.
Then will Frigg´s
‘sweet scent’ fall.

In the poem Vafrnismál, the knowledgeable jötunn Vafrnir asks Odin (as “Gagnrár”) “what the field is named where in combat Surt and the good gods shall meet?” Odin answers by saying that the “designated field” is Vgrr, and it extends “a hundred miles” in every direction. Later in the poem, while still disguised and questioning Vafrnir, Odin wonders which of the three would “reign over the gods’ possessions after Surt’s fire is slaked.” When Surt’s fire is quenched, the deity Thor’s sons Mói and Magni will hold Thor’s hammer Mjollnir, according to Vafrnir.

if there from the floor

Thou wouldst thy wisdom make known:

What name has the field

where in fight shall meet

Surt and the gracious gods?”

where in fight shall meet

Surt and the gracious gods;

each way does it measure.

And so are its boundaries set.”

In the poem Fáfnismál, the hero Sigurd inquires of the fatally wounded dragon Fáfnir the name of the island where Surtr and the sir “shall mingle sword-liquid together.” Fáfnir asserts that the island is called Skópnir, that all of the gods will go there with spears, and that the bridge Bifröst would collapse beneath them, forcing their horses to “flail in the huge river.”

In this poem is foretold to kill the god Freyr, to fight against the god Thor, and to be slain by the god Freyr.

Surtr is the name of the one who resides at the edge of that land, whose guardian he is. He wields a flaming sword and at the end of time he will come, fight, overcome all the gods and burn the whole world with fire.

So Gangleri spoke, “What will defend this place when the flame of Surtr burns the sky and the earth?”

In this din, the sky will crack and the Múspelssynir will then advance. Surtr will ride first, with a blazing fire before and behind him; his sword is formidable, from it emanates a glow brighter than the sun. When they ride on Bifrǫst, they will demolish him, as was said before. The ranks of Múspell will advance to the camp called Vígríðr, where the wolf Fenrir and Miðgarðsormr will also arrive. Loki will also arrive along with Hrymr and with him all the hrímþursar, but it will be to Loki that all of Hel’s followers will unite. Instead, the Múspelssynir will form a separate legion and it will be very bright. Vígríðr’s camp is a hundred rastir wide in every direction.

Freyr will challenge Surtr and an arduous duel will take place before Freyr falls. He will die since he will be without his good sword, which he had given to Skírnir.

With his other hand, he [Víðarr] will take the wolf’s upper jaw and split his throat: this will be the end of the wolf. Loki will fight Heimdallr and each will become the slayer of the other. Then Surtr will set fire to the earth and the whole world will burn.

Vígríðr is called the field

Where they will do battle

Surtr and the suave gods.

measure on each side

The field destined for them.”

Hár said: “The land will emerge from the sea and will then be green and beautiful. The fields will grow without having been sown. Víðarr and Váli will live since neither the sea nor Surtr’s flame will have harmed them, and they will dwell in Iðavǫllr, there where Ásgarðr stood before. Then will come the sons of Þórr, Móði and Magni, and they will have Mjǫllnir with them.

Surtr comes from the south

With the poison of the branches.

sun of the fallen gods.

What is Surtur’s role during Ragnarok?

Surtr is one of the Norse mythological monsters, like Jormungandr, Fenrir and Nidhogg, greatly depicted in Ragnarok. He plays an important part at the end of the world as the Norse people knew it.

Bearing his bright sword, he will go into the fight against the gods, having a clash with the mighty god Freyr, and then the fires he carries will go out and consume the Earth.

He is the arch-enemy of Odin, Thor, and the gods of Asgard, he will lead the fire jötnar in the final battle of Ragnarok.

His role in Ragnarok is always to bring about the end of the world.

How Has Surtur Been Depicted In Popular Culture?

He is also one of the main antagonists in the Knights of the Zodiac series. He is a powerful warrior who wields a giant sword that can create fire. He is also able to create fire with his bare hands. He is a ruthless and savage fighter who will stop at nothing to achieve his goals. 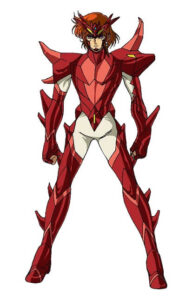 In Saint Seiya: Soul of Gold, he is one of the seven Asgard God Warriors that serve Andreas. He is Aquarius Camus’ childhood pal who employs a flaming method.

Surtr is a symbol of destruction and chaos. He represents the power of fire to destroy and consume everything in its path. In Norse mythology, fire is often seen as a force of destruction, but it is also a necessary element for life.

Without fire, there would be no warmth or light. Fire is also necessary for cooking food and for forging metals.

In many ways, Surtr represents the duality of fire. On one hand, it is a force of destruction, but on the other hand, it is a vital element of life.

Are passionate about Vikings or Old Mythology? Finding the ideal piece of Jewelry can be challenging, and time-consuming, especially if you lack inspiration or don’t know where to look. At Surflegacy, we have a wide range of Viking Jewelry in various styles, shapes, colors, and materials, to accentuate your Viking spirit and look. Visit our shop here