The Serpent Dragon lives in the heart of Niflheim, within the famous Hvergelmir, one of the three primary springs at the roots of Yggdrasil.

Niflheim is the cold, gloomy, foggy land of the dead governed by the goddess Hel. According to some legends, it was the ninth world, into which bad persons traveled after reaching the area of death (Hel).

Niflheim included a well, Hvergelmir, from which numerous rivers poured. It was located beneath one of the roots of the world tree, Yggdrasill.

Niflheim was the foggy region north of the abyss (Ginnungagap) where the world was created in the Norse creation tale.

In Norse mythology, Yggdrasil is the world tree. The name Yggdrasil means ” Odin’s horse.” Yggdrasil is an immense ash tree that is central and considered very holy.

It is the tree that connects the nine worlds in Norse cosmology. Its branches and roots stretch far and wide, providing shelter and sustenance to all the beings that live within its reach.

The first mention of Yggdrasil is in the poem Völuspá, which is found in the Poetic Edda. In the poem, the tree is described as having three main roots.

The first root of the tree goes to the well of Urd, in the world of the Aesir.

The second root goes to the world of the Frost Giants.

The third root goes to the world of Hel, the realm of the dead.

The top of Yggdrasil is home to the eagle who keeps watching over the 9 worlds. There is a squirrel, named Ratatoskr, that runs up and down the tree, carrying messages between the eagle and the serpent dragon, Nidhogg (old Norse Níðhöggr ).

In between these two extremes, there are many different creatures who make their homes in the branches and roots of the tree. Some are benevolent and some are not, but all are necessary for the tree to continue to grow and thrive.

Yggdrasil is a symbol of the cycle of life and death, as it is ever-living and ever-changing. Its branches reach high into the sky, while its roots delve deep into the earth. It is a representation of the interconnectedness of all things and a reminder that everything is related and dependent on each other.

The tree is also a symbol of hope, as it is a constant reminder that no matter how dark and cold the world may be, there is always a place of warmth and light to return to. 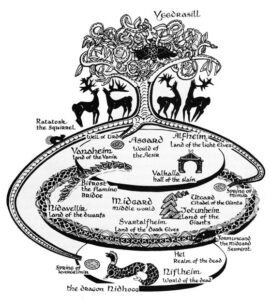 Is the most well-known poem in the Poetic Edda.

It narrates the account of the creation of the world, as well as its inevitable destruction and subsequent rebirth.

The story, of 66 stanzas, is told by a seer or völva

I saw there wading | through rivers wild

Treacherous men | and murderers too,

And workers of ill | with the wives of men;

There Nithhogg sucked | the blood of the slain,

And the wolf tore men; | would you know yet more?

From below the dragon | dark comes forth,

The bodies of men on | his wings he bears,

The serpent bright: | but now must I sink.

Ratatosk is the squirrel | who there shall run

On the ash-tree Yggdrasil;

From above the words | of the eagle he bears,

And tells them to Nithhogg beneath.

Far more than men do know;

The hart bites its top, | its trunk is rotting,

In modern culture, Nidhogg is often portrayed as a fearsome and destructive creature.

It has been featured in video games, including Age of Mythology, Ragnarok Online, World of Warcraft, and the 2014 fencing game Nidhogg, God of War, and Assassin’s Creed Valhalla.

It appeared also in fantasy novels, and the Marvel film Captain America: The First Avenger.

Nidhogg has become a popular subject for artists and storytellers in recent years too.

In the series of comic book Thorgal, is depicted as a formidable legendary monster that Thorgal ventured to battle in his youth with the assistance of the goddess Frigg. It is a versatile creature that can be interpreted in many ways. Whether it is seen as a force of nature or a creature of chaos, Nidhogg remains an intriguing and fascinating character of modern culture.

Nidhogg is a dragon from Norse mythology that symbolizes the never-ending cycle of death and rebirth.

In the myth, Nidhogg is said to live at the bottom of the world tree, Yggdrasil. He is constantly devouring the tree’s roots, which represents the cycle of life and death.

Nidhogg is also said to be the bringer of Ragnarok, the end of the world.

This is because he is constantly devouring the tree, which represents the life-force of the world.

The tree is also said to be the axis mundi, or the center of the world. Therefore, Nidhogg represents the destruction of the world.

Nidhogg is typically associated with Hel, the realm of the dead, and is said to feast on the corpses of the damned. Nidhogg is sometimes portrayed as a dragon, and sometimes as a serpent.

In some interpretations, Nidhogg is seen as a symbol of death and decay, representing the dark and destructive aspects of nature.

In others, Nidhogg is seen as a force of chaos and destruction, representing the primal and untamed aspects of the natural world.

Nidhogg is also sometimes seen as a symbol of the human shadow, representing the dark and hidden aspects of the human psyche.

Finding the ideal piece of Norse Jewelry can be challenging and time-consuming, especially if you lack inspiration or don’t know where to look.

Surflegacy, on the other hand, has you covered. We have a wide range of Viking Jewelry in various styles, shapes, colors, and materials, to accentuate your Viking Pride and look.