In Norse Mythology the primordial void before the beginning of the creation of the cosmos was called Ginnungagap. The word is derived from old Norse ˈɡinːoŋɡɑˌɡɑp  and means “yawning gap.”

It is used to describe the vast, empty space between the world of the gods and the world of humans. Filled with mists existing between Niflheim and Muspelheim.

It is also the place where all creation will collapse once again during Ragnarok, only to be reborn when the cycle is completed.

What is the mythology associated with Ginnungagap?

Ginnungagap. is the primordial void (also called yawning void ) that existed prior to the creation of the universe. It is often described as a vast, empty space where nothing existed.

According to Prose Edda, Ginnungagap was formed when the fire and ice of the primordial world collided, creating a giant void. Over time, this void began to fill with various elements, eventually leading to the creation of the universe.

Ginnungagap is mentioned in Völuspá stanza 3

Of old was the age when Ymir lived;

Sea nor cool waves nor sand there were;

Earth had not been, nor heaven above,

But a yawning gap, and grass nowhere.

Snorri Sturluson elaborates more on this. According to him, the spring Hvergelmir deep below Niflheimr’s frozen wastes gave birth to the eleven rivers collectively known as the Élivágar in the beginning, before the worlds of men and gods existed.

These rivers’ venom changed to ice, and the little drizzle that resulted from it transformed to frost that seeped into the Ginnungagap.

It started to melt thereafter mixing with the hot air coming from M’spell. And life appeared from those toxic drips.

What is the cosmology of Ginnungagap?

The cosmology of Ginnungagap is the belief that the universe was created from a single point, from which all matter and energy emerged. This point is known as the “Great Void.”

It is believed that this void is what gave birth to the first stars and galaxies and that it is the source of all life in the universe. See also our article about Asgard

What does the word Ginnungagap mean?

Ginnungagap is made from the words ginnunga and gap.

In Norse, however, the suffix ginn- is used in front of nouns and adjectives to emphasize their intensity. We find it in words such as ginnregin or ginnheilǫg “supreme gods” and, indeed, in a term such as ginnungar, which seems to denote the universe or complex of deities (Cleasby ~ Vigfússon 1874).

See in this regard such compounds as ginnungahiminn, the “sky of the abyss” that stretched above the Ginnungagap, or ginnungavé, the sacred places of the universe. Anglo-Saxon has a similar usage, as evidenced by ginfæst “very gifted” and ginnwised “very wise.”

Incidentally, in Norse the verb ginna “to deceive, to intoxicate,” whence ginning “deceive” (the first part of the Prose Edda is precisely entitled Gilfaginning “deception of Gylfi”). In poetic usage, ginnungr means “fool” (but also “sparrowhawk,” an animal that was believed to bewitch prey with its gaze).

However, it is more likely that the meaning we are looking for is the former (although Marcello Meli translates Ginnungagap as surprisingly “space for hawks,” understanding it as a kenning for “emptiness, air” (Meli 2008)

The word gap in Old Norse means the same thing as it does in English: a void, an empty space. The ginnung element’s meaning, on the other hand, is far less certain.

How is Ginnungagap pronounced?

There is no one definitive answer to this question, as the pronunciation of the word Ginnungagap varies depending on the region and dialect in which it is spoken.

What is the origin of Ginnungagap?

The origin of Ginnungagap is a bit of a mystery. It is a word that appears in Old Norse literature, but its meaning is unclear.

Some scholars believe that it refers to a primordial void that existed before the creation of the universe. Others believe that it was a term used to describe the gap between the realms of the gods and humans.

What are some other names for Ginnungagap?

Other names for Ginnungagap include “yawning abyss,” “void,” “primeval emptiness,” and “womb of creation.”

How Ginnungagap was created?

As in the scientific theory of continental drift, which hypothesizes that present-day continents are derived from changes in the shape and position of a single emerged land, Norse mythology also believed in something similar: two poles of the universe similar to two great ancestral lands would have arisen from Ginnungagap: to the north Niflheimr (sometimes identified with the realm of Hel, the underworld) and to the south Múspellsheimr.

These two lands were distinguished by being one frozen (Niflheimr) and the other of fire (Múspellsheimr).

To the north of Ginnungagap, stretches the “Niflheim” the “land of mists” the region of eternal ice, dominated by frost and dense fog. In the center of Niflheim is a gigantic well, the “Hvergelmir,” which means “thundering boiler,” in this well are huge masses of water that reach very high temperatures, boiling and rumbling fearfully without ceasing.

From this wellspring all the rivers of the world. In the “Elivagar” “stormy billows,” huge icy waves break, carrying an evil froth, which condensing, covers the whole ginnungagap with a thick blanket of ice. To the south of the world lies “Muspellheim” “land of flames” from where comes the heat caused by towering flames that devour it incessantly.

In this region, the primordial and terrifying force of wildfire, not yet tamed by civilization, reigns supreme.

It is here, then, in this inhospitable place of frost and fire where in the mists of time the events that will lead to the birth of the universe and the Norse gods will unfold.

The first inhabitants of Ginnungagap

Two were the first living beings to be born in Ginnungagap: the giant Ymir and the cow Audhumbla, on whose milk Ymir fed. Both originated from the fusion between the ice of Niflheim and the fire of Múspellsheimr. 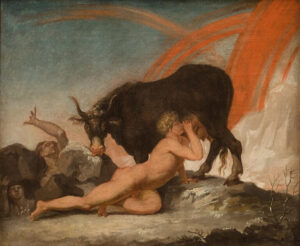 Ginnungagap Ymir and the cow Audhumbla by Nicolai Abildgaard 1790

From the sweat of Ymir, the primordial giant was born other giants that in Norse mythology are symbolic of chaos, while from the other parts of his body were born other creatures of evil disposition.

The cow Audhumla, looking for something to eat, pulled out of the earth, after three days, the body of Búri (“the begetter”), a giant born from the northern ice. From him was born, without a mother, Borr (“the begotten,” from the German “geboren” = “born”) who was the first being to take a wife: in fact, he married Bestla, an ice giantess daughter of Bölþorn and sister of Mimir (or Mímir), the giant from whom Odin derived his knowledge.

According to another version, Mimir would be Bestla’s uncle rather than her brother, as he was Bölþorn’s brother.

From Borr and Bestla originated the three gods from which all the world was created: Odin, Vili, and Ve. Odin was known for giving mankind knowledge and strength, Víli feelings and intelligence and Vé speech and senses.

Two other names for Vili and Ve were also Hoenir and Lóðurr (or Ludor), just as Odin was also called Wotan. 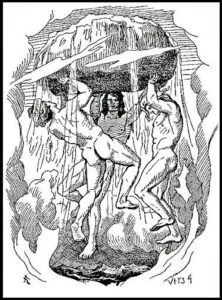 Odin with his brothers

The three brothers (called in ancient mythology texts “the sons of Borr”) killed Ymir and his descendants, except Berglemir, from whom the ice giants descended. 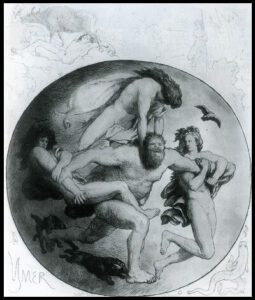 Ymir killed by the sons of Borr

From Ymir’s body, the three gods created the world, and in particular, Midgard, the middle earth or land of men: from his muscles came the soil, from his bones and teeth the mountains and rocks, from his blood rivers and seas, from his hair plants and trees.

His skull then served in the construction of the vault of heaven, which was illuminated by Odin with the sparks of Múspellsheimr that became sun, moon and stars.

Ymir’s brain became the clouds. The wind was created by the movements of the eagle wings of one of Berglemir’s sons placed at the edge of the world.

From the larvae of Ymir’s body were born the dwarves and magical creatures related to the forces of darkness that are enemies of mortals. Four of them, Norðri, Suðri, Austri and Vestri, were placed by Odin to hold up the vault of heaven, and they became the four cardinal points.

6 Most important facts about Ginnungagap

Are you passionate about Viking Culture or Norse Mythology?

Then Surflegacy is the place for you. For more Norse Jewelry visit our store