The meaning of the Old Norse word Laufey is unknown, however, it is thought to be related to Lauf (which means foliage or leaves) or it is also said to be derived from the name of a fictitious tree-goddess known as ‘lauf-awiaz’ (the leafy).

Some researchers have advocated a natural mythological explanation, with lightning striking the leaves or needles of a tree to cause fire.

Who is Laufey in Norse Mythology?

In Norse mythology, Laufey or Nál is an ásynja (name given to female gods, male gods are called Æsir), mother of Loki. and wife of Farbauti, meaning  “the one inflicting harm” or “the one who strikes”

Nál and Laufey are depicted as the same person in the poem Sörla áttr: “She was both thin and feeble, and for that reason she was named Nál [Needle].” However, “the late age of the text renders this piece of information questionable,” according to researcher John Lindow. 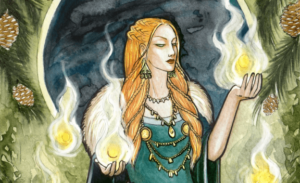 Little is known about Laufey, her name appears only a few times in the Poetic Edda and Prose Edda, the two primary sources of Norse mythology and religious writings.

From the Glyfaginning, in Prose Edda, laufrey is mentioned in stanza 33

Also numbered among the Æsir is he whom some call the mischief-monger of the Æsir, and the first father of falsehoods, and blemish of all gods and men: he is named Loki or Loptr, son of Fárbauti the giant; his mother was Laufey or Nál; his brothers are Býleistr and Helblindi. Loki is beautiful and comely to look upon, evil in spirit., very fickle in habit. He surpassed other men in that wisdom which is called ‘sleight,’ and had artifices for all occasions; he would ever bring the Æsir into great hardships, and then get them out with crafty counsel. His wife was called Sigyn, their son Nari or Narfi.

“How should one periphrase Loki? Thus: call him Son of Fárbauti and Laufey, or of Nil, Brother of Býleistr and of Helblindi, Father of the Monster of Ván (that is, Fenris-Wolf), and of the Vast Monster (that is, the Midgard Serpent), and of Hel, and Nari, and Áli; Kinsman and Uncle, Evil Companion and Bench-Mate of Odin and the Æsir, Visitor and Chest-Trapping of Geirrödr, Thief of the Giants, of the Goat, of Brísinga-men, and of Idunn’s Apples, Kinsman of Sleipnir, Husband of Sigyn, Foe of the Gods, Harmer of Sif’s Hair, Forger of Evil, the Sly God,

Nál and Laufey are depicted as the same person in the poem Sörla áttr: “She was both thin and feeble, and for that reason she was named Nál [Needle].” However, “the late age of the text renders this piece of information questionable,” according to researcher John Lindow.

How was Loki born in Norse Mythology?

In Norse mythology, Loki is a cunning trickster who often causes problems for the gods. He is the son of two giants, Farbauti and Laufey, and was born in a cave. Some stories tell that Laufey gave birth to Loki when a lightning bolt sent by Farbauti struck her.

Loki is known for his ability to change his shape, and he often takes the form of animals or humans. He is also known for his love of mischief and trickery.

He was a mischievous child, and his pranks often got him into trouble. As he grew older, Loki became more cunning and deceitful. He learned how to shape-shift, and used this ability to trick others.

He also became a master of magic. Loki was not always evil, but his actions often caused pain and suffering. 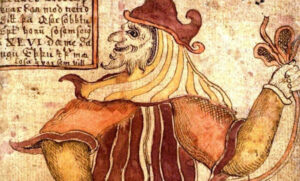 He was responsible for the death of Baldur, (Odin’s son) the god of light and happiness. He also tricked Thor into losing his hammer.

Loki’s mischief and trickery eventually led to his downfall, and he was imprisoned in a cave by the gods.

Laufey is a comic book character, created by Stan Lee and Jack Kirby published by Marvel Comics. He first appeared in Journey into Mystery (vol. 1 no. 112 (January 1965).

In the Marvel Universe, the two characters are inverted, Laufey is an Ice Giant and the ruler of Jotunheim. He is Loki’s father and an enemy of Thor and the Asgardians. While Farbauti is Loki’s mother.

In the early days of the universe, Odin, king of Asgard, and Laufey, king of Jotunheim, faced each other in a long war that culminated in the invasion of the lands of the Ice Giants by Asgardian troops.

During the ensuing conflict between the two factions, the two rulers came face to face and Odin, then wielder of Mjolnir, managed to defeat Laufey by smashing his skull. When the battle is over, in the rubble of the enemy castle, Odin finds a tiny infant Frost Giant: Loki, Laufey’s son kept hidden because of the shame caused to his father because of his small size.

To honor the memory of the one who was a worthy opponent for him, Odin decides to raise Laufey’s son as his own despite the fact that on his deathbed, his father Bor, guiltily cursing him, predicted that adopting the son of an enemy king would bring him ruin

Laufey has the common powers of all Ice Giants, such as superhuman strength, agility, speed, reflexes and endurance due mainly to their immense size, which hovers around 20-30 ft (6-9 m) making them, at least on the physical plane, much stronger than the average Asgardian.

His longevity is almost unlimited and, upon reaching maturity, his aging has virtually crystallized, he also cannot die except by being killed, is completely immune to damage caused by low temperatures (such as hypothermia or frostbite) and is able to generate and manipulate ice.

In addition to all this, Laufey is an expert fighter who, while favoring the use of barbaric weapons such as the club and axe in battle, is also able to wield the sword with mastery.

In conclusion, Laufey was an important figure in Norse mythology as the mother of Loki. She was sometimes portrayed as a giantess or as having a green thumb, and her name meant “leafy island”. Although she is not as well-known as some of the other goddesses, her role in the stories is still important

Tags:
Farbauti, Lightning bolt, loki, mother of loki, norse mythology
Newer Odin Rune
Back to list
Older The Web of Wyrd Symbol: A Guide to Its Meaning and Origins