Norse mythology is one of the most fascinating and well-known mythologies in the world. It’s full of intricate stories and symbols that offer an insight into life as it was believed to be centuries ago.

Today’s article is on the Web of Wyrd, a fascinating pagan sign derived from Norse mythology.

What Is The Web Of Wyrd?

The Web of Wyrd is a Nordic symbol that goes by many different names. It’s also called Skuld’s Net or the Norse Matrix of fate. It is thought to have been woven by the three Norns, who are in charge of the fate of all beings in the universe, including humans and gods.

The word Wyrd originates from the verb “weorþan” meaning “ to happen”, “come to pass”, while the web is supposed to be a depiction of all future, present, and past possibilities.

We will explore what it represents and how it impacts Norse mythology as a whole. We hope you enjoy our insights!

How does the web of wyrd symbol play a role in Norse mythology?

The symbol consists of nine staves and contains all the runes, symbolizing fate and all the “possibilities” that the past, present, and future have brought and could bring. 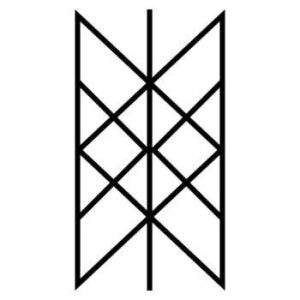 If we analyze it, we can see that is made up of three groups of three lines. The first is a set of three vertical lines, whereas the other two sets intersect diagonally within the first.

These lines then join to produce a web-like pattern that represents the interconnectedness of all things, including people and their relationships.

The web is intended to serve as a reminder to the Vikings and in general Norse people, that previous choices influence the present, and current actions influence the future.

Along with the number three, the number nine is significant in the Norse religion, here are a few examples:

Origins of The Web of Wyrd Symbol

Unfortunately, there is no written record or evidence of when or where the sign initially originated, as is the case for most Nordic cultures and religions.

Some historians feel that the Web of Wyrd is a recent sign created by mixing the runes on Elder Futhark, rather than an ancient motif from the Viking Age. As a result, it is more correct to refer to the web as a pagan symbol rather than a Viking symbol.

The Web of Wyrd first appears in Norse mythology as a symbol of fate. The Norns, who were the goddesses of fate, would weave the destinies of mortals into a tapestry known as the Web of Wyrd. They are similar to Moirai in Greek Mythology, who ruled over human life. 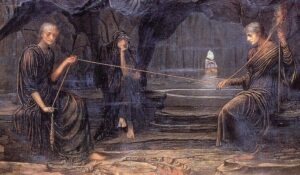 Who are the three Norns?

Urd, Verdandi and Skuld are the three Norns in Norse mythology who sit at the base of Yggdrasil, the world tree. 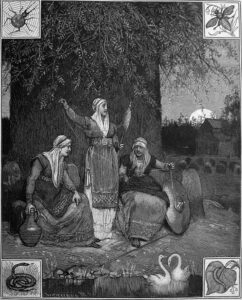 All three Norns are equally powerful and wise, and they work together to weave the tapestry of fate.

The three Norns are often depicted as sisters, and they are said to be the daughters of Loki and Angrboda. They are also said to be the wives of the three brothers Odin, Vili and Ve.

The three Norns live in a hall at the base of Yggdrasil, and they can be consulted by anyone who wishes to know their fate.

What does the web of wyrd symbol mean?

There is no one definitive interpretation of the web of wyrd symbol, as it can be seen in a variety of different ways.

Some people see it as representing fate, and everything that happens is part of a larger plan. it is a reminder that we are all connected and that our actions have consequences.

While others see it as representing life, death, and rebirth. Its importance shows how deeply its roots go into our culture and history.

Regardless of its interpretation, the web of wyrd symbol plays an important role of Nordic mythology and its impact on our culture cannot be overstated.

What does the web of wyrd symbol mean for the reader?

This Norse symbol represents our interconnectedness as humans, and how we’re all responsible for each other’s fortunes. It can be a reminder that everything in life – good and bad – has an accompanying Wyrd force.

The web of wyrd is an important symbol because it has many implications for the reader.

Understanding the web of wyrd can help him to understand his own journey through life, the interconnectedness of the world, and how all events have an impact on each other.

This concept can help you live a better life and achieve your goals.

The web of wyrd and its importance in Norse mythology

In Norse mythology, wyrd is a binding force that binds all things together. As we have already seen, It’s also known as fate, destiny, or karma and it can be a very positive or negative force in one’s life.

Understanding its meaning and importance is key to understanding Norse Mythology, as well as the many myths and stories that are based on it.

The web of wyrd symbolizes the connection between people and everything else. It’s a recurring motif in Norse Mythology and is often used to depict the interconnectedness of all life.

In particular, it’s often used to symbolize the connection between people and their gods. As such, the web of wyrd is an important part of Norse mythology and its importance should not be underestimated.

Are there myths or stories that relate to the Norns and web of wyrd?

There are many myths and stories related to the Norns and the web of wyrd, some of them are the following:

Thence come the dews | in the dale that fall

It stands ever green | above Urdr’s Well.

“Tell me then, Fafnir, | for wise thou art famed,

And much thou knowest now:

Who are the Norns | who are helpful in need,

And the babe from the mother bring?”

“Of many births | the Norns must be,

Nor one in race they were;

Some to gods, others | to elves are kin,

In the Norns’ seat

thence I was mounted on a horse:

there the giantess’s sun

through the dripping clouds of heaven.

Helgakvi a Hundingsbana I is one of the most famous stories featuring the Norns.

The poem starts at Brálund with the birth of Helgi Hundingbane, the son of Sigmund and Borghild. Norns appeared at the house to help him determine his future as a hero.

The valkyries did the spinning in this poem, but the principle remains the same: the valkyries were crafting the fate and destiny of men on a battlefield. The valkyries, also known as “choosers of the slain,” are seen by Dörrur as they spin on their looms, determining the result of those battling in ancient Ireland.

Why is the web of wyrd such an important part of Norse culture?

The web of wyrd is an important part of Norse mythology because it symbolizes how everything is interconnected in the cosmos with one another – both good and bad. It represents all the connections and relationships that exist between people, things, and realms in the world.

Moreover, the web of wyrd is also a symbol that plays an important role in Norse mythology. For example, it is often used in rune magic to determine a person’s fate or to understand more about what might be happening in the future.

Though the Web of Wyrd is a less well-known Nordic symbol, it still holds a significant message in Norse cosmology and has a significant role in the lives of the characters in mythology.

All things in the universe are intricately connected to each other.

By understanding the meaning of the web of wyrd symbol and its importance for the Norse people, you can better understand the mythology and its characters.

Are passionate about Norse Mythology?

Finding the ideal piece of Norse Jewelry can be challenging and time-consuming, especially if you lack inspiration or don’t know where to look.

Surflegacy, has you covered. We have a wide range of Handmade Jewelry in various styles, shapes, colors, and materials, to accentuate your Norse spirit and look. Do not hesitate to visit our selection, click on the image below

Tags:
3 norns, Norse Fate, norse mythology
Newer Laufey The Mother Of Loki In Norse Mythology
Back to list
Older Dark Elves – Let’s Have A Look At These Creatures of Norse Mythology