Idunn, also spelled Idun, Iduna and Iðunn, was one of the female deities worshipped in Norse Mythology, and in particular, she was the goddess of youth, the one who had the gift of preventing death and aging of all the gods

Daughter of the dwarf Duelgard, valiant blacksmith, and the Valkyrie Hildegun, sister of an unnamed brother she is the cupbearer of the gods and the goddess of Eternal Youth.

The bride of Bragi, god of Music, Poetry and Eloquence, she has the appearance of a teenager and of adolescence, she possesses the spirit, that is, optimism, imagination, ‘enthusiasm, joie de vivre and the perception of life as a great adventure to be lived.

What is more, it is she who has the power to cultivate, pluck and distribute the magical golden apples of eternal youth, without which the gods could not survive. 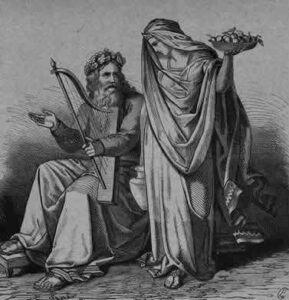 Her name means Battle; a belligerent meaning reminiscent of her maternal function, in sharp contrast to her function as the gentle guardian of the “apples of youth” that ensure the gods’ youth and longevity.

It is easy to see how much this Hebe of Norse mythology was for that prerogative loved and respected by her peers: unlike the Olympian gods, in fact, the Norse gods were not immortal, nor were they spared from the merciless attacks of time, and were totally dependent on the little goddess for their survival and youth.

It is possible that the legend has undergone influences from the Greek and Christian worlds, and particularly from the Greek legend of the Garden of the Hesperides and the Judeo-Christian myth of Adam and Eve.

The name “Idunn” itself bears a curious assonance to the word “Eden,” the biblical garden described in the book of “Genesis ” in which God is said to have placed the tree of the knowledge of good and evil, the fruit of which, according to tradition, is precisely similar to apples.

However, in the ancient Norse language, the fruits of Idunn were simply called “epli,” meaning “round fruits, ” without specifying what kind of fruit they were. It is not certain whether they were also later identified with apples due to the mispronunciation of “epli ” into “äpfel ” (pronunciation: “èpfel,” meaning “apples” in German).

But Idunn’s myth has, in addition to this, many other similarities with the classical world: for example, because of her function of continually procuring fairy apples for the Asi, an analogy between this goddess and Hebe, the cupbearer of the Olympian gods who was part of Greek mythology, has been seen by many.

Beloved and wooed, she inevitably ended up drawing upon herself, envy, malice and a few cheap shots in an attempt to snatch from her the miraculous apples she so generously gave to all. Two, in particular cheated her thoroughly: that master of deception who was Loki, Odin’s brother, and the lord of disguises who was instead, the giant Thiazi.

The most famous myth related to Idunn concerns her abduction by the giant Thiassi (Norse: Þjazi), which closely resembles the Greek myth of Persephone’s abduction by Hades.

It is told that one day, while on a journey, Odin, Loki and Hoenir and were laboriously traversing a desolate heath and had difficulty obtaining food.

From a distance, they saw a herd of oxen, took one, stuck it on a spit to cook it and prepared to eat it. Much to their surprise, they noticed that the meat always remained raw, until a voice from high in the branches of an oak tree nearby reached them. Perched in the branches was an eagle of gigantic physical proportions, who thus apostrophized them:

“If you will give me my share of meat, I will allow the fire to cook it.”

The two divine brothers did not know that mysterious creature, however, they quickly realized that it had the power to act on fire and agreed to share their food with it.

The eagle descended from the tree, approached the spit and with a gesture commanded the fire to act and immediately the meat became browned and sizzling and without delay, he served himself first and for himself took the best pieces of the roast: the thighs and shoulders. 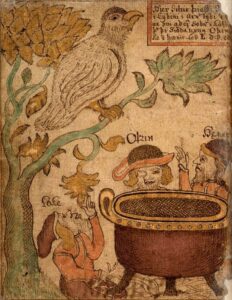 Thiassi, transformed into an eagle, tries to steal Loki, Odin and Hoenir’s meal. From a 17th-century Icelandic manuscript

At that act of unkindness, Loki became very angry; he grabbed a large stick and with it struck the eagle with great violence.

The raptor immediately rose into the air, taking with her the stick, which had been stuck in one of her wings, but, to the other wing, Loki was left attached by his hands, which began to slam ruinously here and there, against trees and rocks. 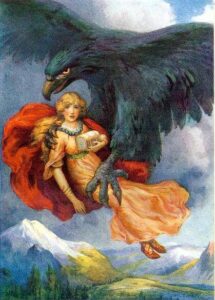 Loki begged her to release him from that torment, and she replied that she would do so on one condition: to induce Idunn, the beautiful goddess of Youth, to come out of Asgard, the abode of the gods, with her “apples of youth.”

Loki, who had now realized that under the appearance of that eagle was Thiassi, Giant of Fire, sworn enemy of the gods, agreed and that one let him go free.

It is unclear whether Thiassi was in love with Idunn or rather wanted to deprive the gods, toward whom he had a deep hatred, of the gift of eternal youth; the fact is that he accepted Loki’s proposal.

It was not difficult for the lord of deceit and fraud to persuade the beautiful Idunn to go to a grove where, he assured her, special apples grew, as precious as his own. Teased and intrigued, the naive Idunn fell into the trap. For at the appointment the giant, in the form of an eagle, arrived punctually, abducted her and in flight led her to his abode in the mountains

That abduction was the cause of great consternation for the gods and especially of concern: without the “apples of youth,” which the beautiful cupbearer distributed to them every day, they began to grow old and ugly.

One fine day they decided to unite in council and discuss the matter. They were well aware of Loki’s deception of their cupbearer, and so they threatened him with torture and death if he did not bring the Goddess back to them, and Loki had nothing left to do but obey and set out at once to find her. 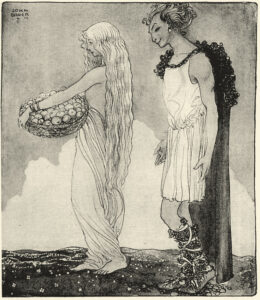 Idunn and Loki illustration by John_Bauer

A special disguise was needed to mislead, Thiassi, the king of disguises, but to Loki’s rescue came Fryja, the goddess of Love, in a magical hawk disguise, and so, looking like that, he flew off into the mountains, in the direction of Jötunheimr, the residence of the Giants.

Thiassi was not there, fortunately for her, and Idunn was alone; Loki turned her into a nut, grabbed her with his claws and quickly flew away.

The Giant soon became aware of Idunn’s disappearance and set out in pursuit of the hawk, assuming his now customary eagle appearance.

He chased the falcon all the way to the Asgard residence to take back the beautiful goddess, was burned alive by the flames lit by the other gods to defend the castle.

Loki being the god of fire, the flames could not scratch him or the goddess Idunn, who clutched in her claws turned into a walnut, but instead caused the giant’s death, arousing the wrath of Skadi, the latter’s daughter.

story, however, does not end there. Skaði, Djissi’s daughter, armed to the teeth and with a great desire to avenge her father, set out for Ásgard.

The gods, however, happy to have regained their youth and zest for life, were far from inclined to throw themselves into a warlike endeavor and did not take much effort to convince her to desist from warlike intentions and to choose instead, a handsome husband from among them.

To appease the giantess’ anger and prevent her from taking revenge, she was proposed to marry one of the gods of Asgard, but on the condition that she choose him without looking at his face, but only at his feet.

Because of this, the giantess, who had always been in love with Baldr (the god of light), chose wrongly and had to marry reluctantly to Njörd, father of Freya and Freyr, who, in addition to being the god of the sea (and therefore the natural antagonist of Skadi who lived in the mountains), was also not one of the most important gods of Asgard (he was in fact a Vanir and not an Asi), and their marriage turned out to be very unhappy.

Idunn was depicted as a beautiful woman, looking like a 20-year-old or even a teenager, her blond hair sometimes loose and sometimes tied in two long braids, carrying a basket of apples in her hand.

Bragi, her groom, on the other hand, was depicted as a man with a very long beard, always intent on playing the harp, the symbol of poetry. According to the 13th-century prose Edda, being the god of the poetic art (called precisely “bragr” in the Norse language) he was the son of Odin, the god of knowledge and all the arts, although official tradition has it that he was not his relative but merely his adviser.

It is unclear why he was sometimes depicted as an old man with a white beard, since, as Idunn’s husband, he had access to the magical apples dispensing eternal youth.

Similarly, it is unclear why Idunn was sometimes referred to as the “daughter of Ivaldi,” the father of all dwarves, given her completely different appearance from that of her siblings and the ability to live above ground instead of in the mines, where the dwarves were forced to in order not to end up petrified by the sun.

Other versions of the myth also report that Idunn was the daughter of a dwarf-this time Duelgard-and the Valkyrie Hildegun. In addition, her maternal origins are also at odds with the descriptions of Idunn, since the Valkyries had a fierce and belligerent character while the latter was always said to be meek and gentle.

According to some legends, Idunn’s apples had the ability to bestow fertility as well. For this reason, she was also considered the Norse goddess of fertility, on par with the goddesses Freya and Sif.

In fact, Idunn possessed some characteristics in common with these two goddesses: Sif the fact that she had long hair the color of gold, and Freya the fact that she was often depicted with flowers in her hair or as a woodland creature (in fact, it was in a wood that her abduction had taken place).

There is no shortage of paintings and illustrations featuring her together with two cats, symbolic of Freya but also of the goddess Frigg, Odin’s wife.

Tags:
Idunn Goddess, Idunn Norse Mythology, Thiassi giant
Newer Goddess Syn
Back to list
Older Who Were the Vikings? [Get the Facts]
close