Take a step back in time and discover the Viking Longhouse

Today Viking Longhouse is one of the most iconic and well-known longhouse styles in the world and Its simple yet striking design has inspired many builders and designers over the years, from modern-day longhouse enthusiasts to Hollywood filmmakers.

In this blog post, we’ll be exploring everything you need to know about this iconic style of architecture. From its shape and uses to the unique features that make it so special, this incredible Viking construction!

What is a Longhouse?

It’s a type of dwelling that was popular among the Norse Viking people. It functioned as both a residence and a farmstead and was used from the 8th century onwards. Turf huts were another name for these longhouses.

They were first built in Scandinavia and then later spread to other parts of Europe, including the British Isles and Iceland. Viking longhouses were usually built to house a large number of people, often extended families.

There are many features that make this kind of dwelling unique, including its ship-shaped outline!

The Vikings who lived in longhouses were mostly farmers.

How was made a Longhouse?

Viking longhouses were normally 5 to 7 meters (16 to 23 feet) broad and 15 to 75 meters long (50 to 250 feet), and built using whatever materials were available locally. The most common materials were timber and stone.

In places such as Iceland where wood was scarce they were made of turf and for this reason, they are also called turf houses or turf huts.

Men in the community were responsible for their construction, with the women helping to gather the materials. It was a cooperative effort, and everyone had a role to play.

It would take a long time to build a longhouse, often several months, but the effort was well worth it because they were built to last, and many of them are still standing today.

Viking longhouses were usually built facing the sun so that they would be warm in the winter.

They were also built with an angle so that the roof would shed snow.

This allowed the occupants to make the most of the limited sunlight during the long, dark winters.

They were built with a timber frame and had walls of wattle and daub. The roofs were thatched with straw or reeds.

What was inside a Viking longhouse?

There was a fire in the middle of the house, used for cooking, and a hole in the roof for smoke to escape.

Around the fire, there were benches where the family slept. There were also shelves for storing food and pots and pans.

Viking Longhouses in rare cases had chimneys and usually, no windows were used. Holes in the roof and exterior doors offered some kind of ventilation and lighting by allowing light to enter and smoke to exit.

However, because of the limited ventilation, there was always a lot of smoke inside the house and this could have potentially harmed young children.

Candles were very expensive and therefore rarely used instead Lamps filled with fish oil were adopted to provide additional light.

The longhouse was divided into multiple rooms on the inside.

The roof beams were supported by two rows of posts that stretched the length of the longhouse. Each interior space was separated into three long aisles by these columns.

As a result of the columns supporting the roof, the walls supported minimal weight. The walls of the longhouse typically bowed out in the center, making it broader in the middle than the ends, mimicking the shape of a ship.

The center passage of each chamber featured a packed dirt floor between the row of roof support columns.

The ashes from the home fires were dumped over this area to function as an absorbent. This center aisle served as a connection between different areas of the house.

Furthermore, fires were created in this location, either in a longhouse fire pit or in individual fire rings in the rooms. The fire supplied light and heat while also being used to cook.

There was also a separate area for agricultural animals.

The byre and supporting rooms

The longhouses were divided into two main areas: the living area and the byre.

The living area was at one end of the longhouse, and it was here that the family slept, ate, and spent their time when they were not working.

The byre was at the other end of the longhouse, and it was where the animals were kept. The byre was usually divided into two sections: one for the cows and one for the pigs.

The longhouses were warm and comfortable, and they were well-suited to the cold, northern climate.

The families who lived in them were self-sufficient, and they were able to produce most of the things they needed. The longhouses were usually built close to a water source, so that the residents had easy access to fresh water.

Who lived in Viking longhouses?

These dwellings played also an important role in their society. Not only did they serve as homes, but longhouses were also communal spaces where people gathered to exchange goods and services.

In the Viking age, families were large, and there was often more than one family living in a longhouse.

The largest longhouses could house up to 60 people.

Families were often related, and would share one hearth, and they would help each other with the chores.

The younger and fitter Vikings would be in charge of feeding the livestock and working the land. The older who could no longer work the land stayed inside doing whatever they could to help with the running of the house.

They were the center of family life and there would have been practically little privacy. Everyone cooked, ate, worked, and slept in close quarters, so everyone knew everything about everyone. 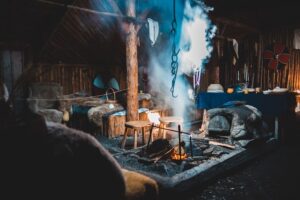 Children learned from their parents and from the other adults in the longhouse. Longhouses were also used for religious ceremonies and for entertaining guests.

Finding peace and quiet would have been hard with so many people living under one roof, much alone animals.

How were doors handled in Viking longhouses?

Although the inside of a Viking longhouse was warm and dry, drafts were prevented in houses by using antechambers and double doors that formed air chambers.

Drafts not only have the potential to cool the home, but they may also disrupt the typical airflow of the fire, filling it with smoke.

Norse Viking longhouses were a revolutionary design in the Viking age.

They were very sturdy and could last for many years, even centuries. In fact, there are over a hundred different types of Norse Viking longhouses, each with its own unique features and history.

These longhouses were popular in Scandinavia during the Viking age, and they can still be seen in some parts of Scandinavia, where they have been preserved as historical landmarks.

Where were Norse Viking Longhouses found?

Longhouses were typically found near water – either a river or coastline.

Today, you can still see remnants of the longhouse in rural areas throughout Scandinavia and Iceland!

There are many Viking longhouses in Denmark, including those at Trelleborg and Hobro. Longhouses and tuft houses can also be found in Iceland and Greenland.

In 2021, archaeologists have uncovered one of Scandinavia’s largest Viking longhouses, in Gjellestad around 50 miles southeast of Oslo.

Are there any other longhouses like the Norse Viking Longhouse?

The closest construction similar to the Viking, is the Iroquois longhouse a large, multi-family dwelling used by the Iroquois people.

The longhouse was up to 60 feet long and 15 feet wide, and could house up to 60 people, made with a frame of wooden poles, and was covered with bark or mats. 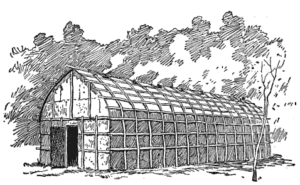 The door was at one end of the longhouse, and there was a fire pit in the center of the dwelling. Beds were along the walls, and families were separated by partitions made of bark or mats.

The longhouse was a warm and comfortable home for the Iroquois people, and was used for shelter, storage, and a meeting place.

Contrary to popular belief, Vikings were not only barbarians people famous for their raids they were also skilled craftsmen and traders.

The Viking Longhouse, the Viking axe, and the Viking ships are just some examples of their ability to build functional things.

The Longhouse was not only a house, but a place where people lived and worked. It was also a social hub – where families gathered to celebrate festivals and holidays together.

Are passionate about the Vikings?

Finding the ideal piece of Norse Jewelry can be challenging, especially if you lack inspiration or don’t know where to look.

At Surflegacy, we have a wide range of Viking Jewelry in various styles, shapes, colors, and materials, to accentuate your Viking spirit and look.

Our handmade jewelry is designed to be worn every day, no matter where you go or what season is. Are you ready to step up your wardrobe game?

Tags:
longhouses, tuft houses
Newer Valknut Symbol – The Most Enigmatic Viking Symbol
Back to list
Older What Is the Valhalla Symbol And What Does It Mean?
close