Who Were The Danish Vikings? [Get The Facts]

Denmark is often associated with the land of fairy tales because of its landscapes so idyllic that they look like something out of a book by Hans Christian Andersen, the famous Danish writer of children’s fairy tales.

But Denmark is also the country of the Vikings, shrewd and swift sailors and warriors. 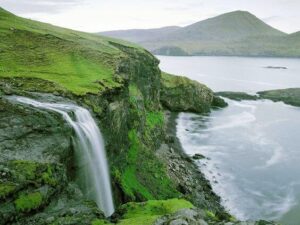 They were named after the term Vik, which in their language meant fjord.

Around the 8th century A.D., they began to move around, aboard their boats, called Drakkar and reached as far as Ireland, Scotland, England, northern France, and even Italy.

In the Viking language Drakkar means dragon; in fact, on the prow of their ships was placed a wooden sculpture that, representing a dragon, was supposed to frighten their enemies.

The purpose of their voyages was not to plunder and loot the riches they encountered in Europe; they were primarily driven by the desire to find new lands on which they could settle since in winter the ice made navigation impossible.

Table of Contents show
1 The groups of Vikings
2 Facts about the Danish Vikings
3 Why did Danish Vikings move to England?
4 But why did so many Vikings leave the safety of their homeland, friends, and relatives to settle in a new country?
5 Famous Danish Vikings
6 King Gorm the Old
7 Harald ‘Bluetooth’ Gormsson
8 Ragnar Lodbrok
9 Ivar the Boneless
10 Cnut the Great
11 Estrid Svendsdatter
12 Sweyn II Estridsson of Denmark
13 Buy Viking Jewelry

The groups of  Vikings

There were three groups of Vikings: the Norwegian Vikings, the Danish Vikings, and the Swedish Vikings

In this article, we will discuss the Danish Vikings.

The Danes focused their attention on Europe. In 911 a group of Danish Vikings, commanded by Rollo, landed on the coast of what is now Normandy, and the of France, Charles the Simple, granted them to occupy the territory in exchange for an end to all plunder.

Thus was formed the Duchy of Normandy (The Danish Vikings were also called Normans = Northmen), a vassal state of the French monarchy.

The Danes moved mainly toward England and France. They established their bases at the mouths of rivers – of the Loire and the Seine, for example – and from here they set out in search of booty.

Between raids they got into the habit – or rather it was a necessity – of wintering in the same place where they had accomplished their exploits, and so it came to pass that, beginning in the second half of the ninth century, the Danes transformed the first and temporary appropriations of a military character into permanent settlements.

Sometimes the appropriations were “formalized” by the rulers through the vassal relationship: the ruler accepted the Danish chief among his vassals and granted him dominion over the lands that he had in fact already occupied, in exchange for a promise of military aid in case of war.

Thus it was that, in the early 10th century, the Dane Rollo came to an agreement with the King of France Charles the Simple, receiving as a benefit his territories on the mouth of the Seine “for the defense of the kingdom.”

The territory later expanded, through marriages, inheritance more or less spontaneous requests for protection, and took the name “Normandy” (i.e., “land of the Normans”), which it still retains today, to soon become a duchy.

Among the Northerners, the Danish Vikings were regarded as the most powerful military force. Furthermore, when it came to political and social power, the Danes possessed a unity that other Vikings lacked.

The fact that the Danes had an envoy at the court of Charlemagne when the Saxon leaders sought an explanation for the massacre at Verdun is documented in the Frankish annals (782).

Although the outcome of that meeting is not recorded in history, it is clear that the Danes were heavily involved in regional politics.

Danes were the most politically organized, as well as the most consistent in leading and carrying out procurement raids and later conquest of new lands.

The Danish military power grew as they became more successful in their hit-and-run raiding conquests. Expansionist adventures continued, and their military might remained largely unrivaled.

There are few places in Europe and the Western world that have remained unaffected by Viking exploits; each of the three Scandinavian regions took slightly different approaches to exploration and conquest.

The Danish Vikings successfully conquered lands in England, Ireland, and Scotland in the mid-ninth century. By 840, these Vikings had settled in Ireland, constructing settlements with Viking-style long houses near the coast. They established Ireland’s first trading port towns.

Pisa, Italy, was successfully ransacked. They successfully conquered France in 842, including Limoges, Orleans, and Paris. In 844, the Vikings attacked Arab-controlled Seville.

In 911, the Danish Vikings were given Rouen and the surrounding lands in Northern France in exchange for preventing other invaders from accessing the Seine. This region became known as Normandy, or the “Land of the Norse.”

In 1066, William the Conqueror, Duke of Normandy, claimed the throne of England, himself descended from Danish Viking nobles in France lordships. He was still successful in repelling further Dane incursions, the last of which was planned in 1085 by Canute IV of Denmark but never sailed.

During the 11th century, the Scandinavian language was gradually abandoned there and Christianity spread there, partly through the work of the Benedictine monasteries there.

Facts about the Danish Vikings

Why did Danish Vikings move to England?

Despite the dangers, between the 9th and 10th centuries, between 20,000 and 35,000 Danish Vikings chose to uproot and migrate to England. According to a recent study published in the archaeological journal Antiquity.

The trips were initially raiding expeditions, but as time passed, more and more Vikings decided to stay in the new land to the west, cultivate the land, and “proceeded to plow and to support themselves,” according to the Anglo-Saxon Chronicle of 876.

But why did so many Vikings leave the safety of their homeland, friends, and relatives to settle in a new country?

According to Viking researcher Sren Sindbaek, a professor with special responsibilities in Aarhus University’s School of Culture and Society, the reasons for the wave of migration in the 9th and 10th centuries were driven by the same factors that drive the migration to Europe today: the prospect of a better life.

The Vikings’ first trips to England were more or less haphazard raids. However, by the latter half of the ninth century, the Scandinavian Vikings had formed a large army known as the Great Heathen Army, or micel in Old English.

The initial raids were about the need for portable wealth (‘treasure’) that could be taken back to Scandinavia to help in building allegiances between lords, their followers, and other families and communities, and possibly also in marriage relations.

These early raids revealed that the British Isles had more to offer than just stolen treasure. They also provided cultivable land.

The areas in the north and east of England were quickly taken over by the Danish, and by the 11th century, the Danish king had complete control of the islands of Great Britain.

At the same time, it marked the end of an unstoppable wave of Viking raids across England. What actually occurred?

For too long, the English feared the Vikings, and in 1002, the English King ordered that all Danes in England be killed.

We don’t know how many people were killed, but there’s no doubt that a massacre occurred. This mass murder became known as the St. Brice’s Day massacre.

He is responsible for uniting Denmark’s smaller tribal kingdoms into one nation under one King as ruler of Denmark from 936 to 958. He is the father of Harald ‘Bluetooth’ Gormsson and the first King of Denmark. 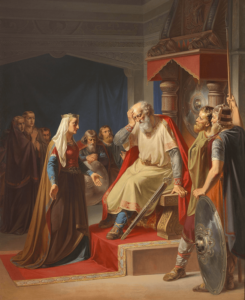 King Gorm the Old Gorm learns of the death of his son Canute, painting by August Carl Vilhelm Thomsen

Second, he conquered Norway, which had far-reaching historical ramifications. Finally, he persuaded the Danes and Norwegians to convert to Christianity.

His dynasty went on to rule over an ever-expanding kingdom that included much of the British Isles and parts of Sweden at its peak.

Harald is referred to as King of Denmark in ancient runic letters on the Jelling burial stones in Jutland, Denmark. He was also Scandinavia’s first Christian ruler.

This is significant because the Catholic Church’s cultural and political changes significantly altered the trajectory of Denmark and Europe as a whole.

The runic H and B of his initials are now the logo for Bluetooth technology. This Danish Viking hero and King of Denmark and Sweden is almost mythic in Scandinavia. His adventures are recounted in Old Norse poetry, legends, and sagas.

Historians disagree on how much is fact and how much is embellishment, but all agree that his conquests of Europe were brutal and largely successful. In 845, he led the Siege of Paris and the ransacking of Paris, which culminated in a series of attacks throughout Europe.

He was killed while attempting to avenge his warriors, who had been slaughtered in battle by the English troops. According to legend, King Aella of York threw him to his death into a pit of venomous snakes.

Ragnar Lodbrok’s son was Ivar Ragnarsson. It’s unclear where the term “boneless” came from. According to some accounts, his legs were damaged or even missing. Some believe it was a derogatory term coined by his opponents to imply male impotence.

It’s also possible that he had a hereditary disease that caused his bones to be fragile and easily broken. This may be debatable given his reputation as a berserker in battle, fighting in a frenetic trance-like state.

In 853, Ivar began to challenge Ireland’s powerful kings. He ordered his troops to raid prehistoric Irish tombs that had lain untouched for 4000 years. He destroyed the Irish settlements and eventually became the First Viking King of Ireland.

For hundreds of years, his descendants ruled Ireland. Ivar and his brother Halfdan led the Great Heathen Army through England in 865.

In order to avenge their father’s death, Ragnar Lodbrok’s sons captured York and executed King Aella in a heinous manner.

Cnut, also known as Cnut the Great and Canute was Sweyn Forkbeard’s son, who successfully conquered England in December 1013 but died unexpectedly a few weeks later.

After two years as commander of the Danish army, Cnute ascended to the English throne in 1016.

Cnut began a reign that brought peace and prosperity to England and Denmark after some initial cruelty toward the English. He proved to be a strategic diplomat, benefiting both himself and the countries he ruled. 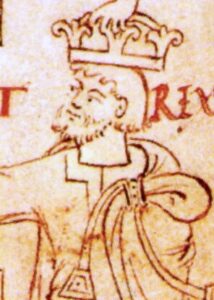 Estrid, the daughter of Sweyn Forkbeard and Cnut the Great’s sister, married a regent for Denmark, Ulf the Earl, who had fought alongside her brother in the conquest of England and had been appointed regent to Denmark when Cnut became King.

Estrid may have been complicit in a plot to murder Ulf the Earl when he switched loyalties and aligned with the monarchy of Sweden to take the throne of Denmark away from Cnut.

She became a Catholic Church benefactor, funding the construction of a simple stone cathedral where Roskilde Cathedral now stands.

Estrid raised her son, Sweyn II, who succeeded Cnut as King of Denmark after his death in 1035. He was known as Denmark’s King Sweyn Estridsson.

Estrid was given the title Queen instead of Queen Mother, which is usually reserved for a sovereign Queen or a King’s wife.

He is regarded as a fearless warrior who fought valiantly for Denmark against a usurper King of Norway.

He was also a successful diplomat, eventually reaching an agreement with Norway’s King and restoring Denmark’s throne to Danish control. He was crowned King of Denmark and reigned for 27 years.