Where Are Vikings From?

Where are Vikings from? is a frequently asked and pondered question. If you want, the answer could be as simple as “Scandinavia; the Vikings came from Scandinavia.” Is that, however, the end of the answer? Is their origin limited to a single word of eleven letters?

Where Are Vikings From?

The Vikings were an ancient warrior tribe from Scandinavia who came from three countries: Denmark, Norway, and Sweden. The group is still regarded as one of the most ferocious fighters in history, with raids in various parts of eastern and western Europe.

If I may, the answer does not stop there. For a long time, Vikings were labeled as barbarians, invaders, and predators; they are frequently portrayed as one-dimensional warriors whose accomplishments were limited to plundering. But we all know that the Vikings were a society that was constantly evolving and forming itself over time into what we know them as now.

They absorbed fragments of the places and situations they encountered and made them their own. And we must all be familiar with their historical sagas before we can arrive at a conclusion about a specific region.

Vikings, also known as Norse or Norsemen, are thought to be the first settlers of Scandinavia, which includes modern-day Norway, Denmark, and Sweden. Initially pagan in their practices, they became known in the medieval world as raiders and expeditions. 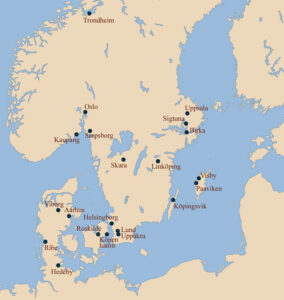 There are numerous popular theories concerning the origin of the name ‘Viking,’ each of which relates to a different interpretation of their origin. The first of many is that they are named after Toki Viking because of his Viking activities.

Another theory is that the word “Viking” is derived from the Old Norse word “vik,” which means “those who lived on the land’s and sea’s edges.” There’s a chance it came from the Old English word ‘wic,’ which meant ‘camp’ and referred to the temporary settlements the Vikings built during their raids.

Scholars are divided on the question of ” where are Vikings from? ” Scholars believe that these ‘Rus’ people first appeared in history around the eighth century in what is now known as coastal eastern Sweden. According to what has been recorded, they gained popularity as a result of the raids in 793 until the Norman conquest of England in 1066. 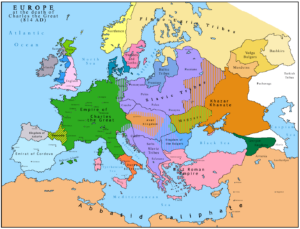 Armed raiders were seen attacking the defenseless monastery of St. Cuthbert along the coast of Northumbria in 793. This was the beginning of the Scandinavian seaborne pirates. 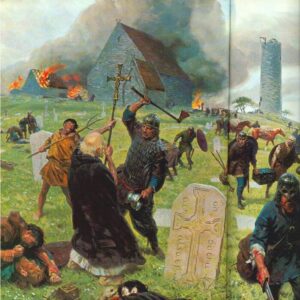 Raid on Lindisfarne in 793

Although historians associate Scandinavia with the Vikings, many non-Scandinavians, such as Slavic, Baltic, and Finnic people, fought alongside and co-existed with them. The famous Jomsviking was a Viking league comprised of Scandinavians and Slavs.

Because of their geographical location, they were forced to begin their lives through agriculture or fishing. Shipping technology advancements paved the way for them to become seafarers and explorers. They have had a tremendous impact on the history and culture of the Northern world, and are thus ingrained in our minds.

Overpopulation, political instability, economic needs, and other factors taught them that the’sky has no limit.’ And they tried to achieve everything they could see and everything beyond that. They searched for opportunities in what lay ahead of them.

Viking voyages became more frequent in the mid-ninth century, and they settled in Iceland in 872 under the flag of Ingólfr Arnarson. They established an independent and fierce society that was unique to all. 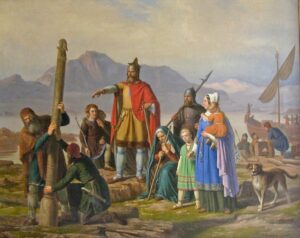 The painting depicts Ingólfr Arnarson, the first settler of Iceland by Raadsig

They held a variety of mythological beliefs. The most important were feasting and fighting. They desired the Valhalla afterlife through their mythological god Odin. They believed that in order to have a good afterlife, they had to die in battle. Those who were unable to do so were chosen to go to the goddess Freya’s field and offer themselves to the women who died as maidens. They spent the day perfecting their battle skills in preparation for ‘Ragnarok,’ the end of the world, and then every night, their wounds magically healed and they feasted like there was no tomorrow. Their drinking horns were never empty.

For a long time, Iceland was devoted to their old gods, such as Odin, Thor, and others. Christianity came to them much later. They became Christians in order to avoid civil war. They discovered Christianity to be morally compatible and gained perspective. 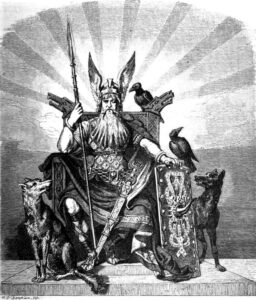 One of the reasons for the Norsemen’s expansions could be that they sought foreign women. In the 11th century, historian Saint Quentin proposed this theory. Another explanation was that they took advantage of a weakness in the surrounding areas. Another theory was trade, and there were many others, such as a lack of resources.

They were active beyond their homeland, and Vikings encountered and were influenced by many cultures. They were learning new things and going through cultural transitions.

The most powerful influence is Christianization. It altered their lives, bringing with it a moral component. It also resulted in the establishment of three kingdoms: Denmark, Norway, and Sweden.

Assimilation of the nascent Scandinavian kingdoms into the cultural mainstream of European Christendom altered the aspirations of Scandinavian rulers and those able to travel abroad, as well as their relationships with their neighbors.

With the passage of time, the literature flourished as well. Inscriptions from the 11th and 12th centuries have been discovered. There were numerous Viking sagas to consider. They used runner, a standard alphabet based on sound values. There are fewer codified written documents, but there are many stones with runic inscriptions.

Surflegacy is the final destination for the modern Viking/ Norse Mythology fan looking for something different. For more Norse Jewelry visit our store by clicking on the link image below.

Newer Sexuality and sex in Viking Age
Back to list
Older How Tall Were The Vikings? Uncover The Truth
close