What Did Vikings Look Like? The Answer May Surprise You

We certainly can find an abundance of myths and legends about the appearance and the physical shape of the Vikings and, more generally, of the Norse people dedicated to raids and pillages.

There are those who believe, mistakenly, that they were dirty and sloppy, who instead after perhaps having seen TV series about these people, that they were so strong as to resemble much to modern bodybuilders, blond with long hair often gathered in braids and thick beards.

While these stereotypes hold some truth, they are far from an accurate portrayal of what Vikings looked like. Find out what Vikings were really like by reading on.

If we talk about the appearance of the faces of the Vikings centuries ago, unfortunately, we can only make assumptions, as there are no documents (the Vikings handed down everything orally) and there are no reliable documents or artifacts where they are described in detail except for a few rare examples.

However, we can make some suppositions thanks to the numerous skulls found so far in archaeological excavations. From the studies on these skulls has however emerged that: the male and female faces were much more similar to each other than they are today.

“It’s difficult to determine the sex of a skeleton dating back to the Viking era” says Lise Lock Harvig of the Department of Forensic Medicine at the University of Copenhagen.

“The skulls of men and women were different than we see today, with men’s skulls being slightly more feminine (had softer jaws) and women’s being more masculine with a more pronounced structure in the superciliary arch. Obviously, this doesn’t apply to all skeletons from the period, but in general, it is difficult to determine gender.” 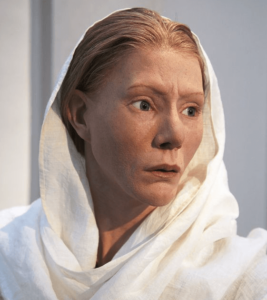 Facial reconstruction of Viking woman ( found in the English city of York) pic. from history.com

In TV series we have often seen the Vikings paint their faces in order to intimidate the enemy in battle. But is it true?

In the various sagas, this is not mentioned, but has been found evidence from reliable sources that the Vikings used a kind of eyeliner, which is nothing but kohl a cosmetic used mainly in the Middle East.

This is also confirmed by what was described by an Arab emissary named Ibrahim Al-Tartushi, who saw the Vikings and observed that both sexes wore a dark and permanent makeup around their eyes, his words in describing it were:

“Artificial eye make-up is another peculiarity; when they wear it their beauty never disappears, indeed it is enhanced in both men and women. ”

It should be noted that the word kuḥl has been translated for simplicity as eyeliner, but in fact in Arabic means kohl the cosmetic used mainly in the Middle East and Mediterranean, mentioned above.

Vikings are often imagined as very fair-skinned individuals with blond or red hair and light-colored eyes. But is it really so? Even in this case, we are helped by science and what has emerged may leave some people stunned.

In fact, according to the latest DNA study conducted on approximately 442 Viking skeletons by the scientific journal Nature in 2020, it was discovered that most Vikings did not have blond hair and blue eyes as a legend and popular culture have led us to believe, but rather reveals that there was much more genetic diversity than previously thought about the so-called Nordic peoples.

The Vikings were people who traveled by sea not only to conquer but also to trade and explore. So not only many of the Vikings studied turned out not to be blond or red-haired or blue-eyed (however, blonde hair was highly prized, and many darker-haired Vikings bleached their hair blonde using lye soap), their genetic sequence shows that the Vikings were not a homogeneous group of people, but many of them were “mixed individuals”.

From the remains analyzed have emerged genetic traits of indigenous peoples of Scandinavia such as the Sami and also those of populations of southern Europe and Asia. See also our article “Were There Black Vikings? Get The Truth”

So after this important study, we should begin to think of the Vikings as a people with somatic traits sometimes very different from each other, because being a Viking was more a sense and culture of belonging, as much as a matter of genetic inheritance.

Average lifespan of a Viking

The Viking age was definitely not an easy time to live in, infectious diseases were many and on the agenda, the environment in which the Vikings lived was undoubtedly dirtier than it is now.

Living in poor hygienic conditions certainly favored the proliferation of parasites, as also demonstrated by a 2014 Danish study in which intestinal worms were found by analyzing Viking feces. Being infected with these parasites led to a weakened immune system that if not properly treated could lead to serious damage to certain organs such as the liver.

Children had a reduced life expectancy and only a 50% percentage exceeded 7 years of life, women were at risk of dying during childbirth while men if not affected by disease often died in battle.

From this picture, it should come as no surprise that the Vikings had a life expectancy of 35-50 years. It was very rare for someone to live to 50 years or more, but there are also examples, especially of upper-class Vikings, who lived longer, one of these was Harald Fairhair, King of Norway, who lived for more than 60 years.

These data seem to confirm those collected in Jorvik on life expectancy during the Viking Age, which was found to be as follows: 50% percent of adult men died between the ages of 21 and 30.

For women, the risks were in pregnancy and childbirth, and 35% of them did not survive past age 30. Those 31 to 40 years old were the “middle-aged” people of the Viking Age and 50 years old would be considered “old”.

Women seem to have had a particularly high mortality rate in the 41 to 50 age group compared to men, but this is because about eight out of ten of the adult men had already died at an earlier age. It was exceptional for someone to reach what we would call ‘old age’ today.

Below is a facial reconstruction done on a skeleton found at Coppergate in York over 30 years ago, the skull was laser scanned and with a special program was recreated a 3D digital image 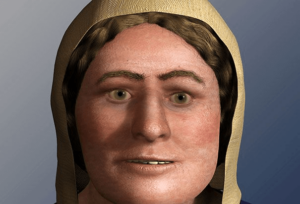 Whatever you wear, you’ll find the ideal trendy piece to complement your wardrobe. Our pieces are crafted in Italy with care and style in mind, reasonably priced, so you won’t have to break the bank to get one.

Tags:
Average lifespan of a Viking, Did Vikings wear makeup?, How tall were the Vikings?, Viking clothes female, Viking clothes male, Viking clothing, Viking Facial Features
Newer Tyr Norse Mythology, Who Was He? Let’s Find Out
Back to list
Older Why Were Viking Weapons So Unique And Effective?
close